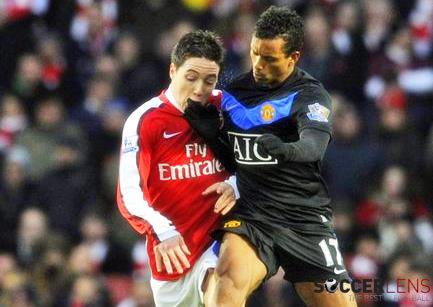 Football isn’t nearly as exciting without the flair players – the ones capable of conjuring pure magic out of a nothing situation. While you’ll have the odd midfield controller or a fullback capable of delighting on his day, nothing can quite beat the thrill of watching a wide player in creative motion.

The hubris of the wide player lies in the constant conflict between passing the ball to a well-positioned teammate, thus foregoing a chance at glory for the sake of success for your team, or taking matters into your own hands and charging towards goal with a vengeance.

Here’s a look at the five players who have best managed to find that subtle balance of the two.

Remember when pundits were busy appointing Chelsea as champions this season, way back in September? Yeah, me neither, but it did happen. Due to a quirky fixture list, Roman’s side was busy annihilating all in their path, as they surged towards the title in fine style, with Florent Malouda serving as the chief threat and developing a formidable understanding with Drogba and Anelka.

He had become a bit of a joke figure at Chelsea, and had been declared a massive flop before Carlo Ancelotti’s arrival resulted in his resurgence as a creative force on the left-wing. He started the season in excellent form before fading away, much like the rest of the Chelsea squad, until the arrival of David Luiz helped instigate a mini-revival of sorts.

Although unlikely, Chelsea still remain dark horses to take the title this year, and he takes number five on this list purely because without his initial burst, there was no way the team would still be in Champions League contention, let alone the summit.

Keeping aside the fact that Manchester City’s ultra-conservative style of play in the big games has been shocking when you factor in the investment gone in to develop a fearsome squad, David Silva has been a revelation this season. A slow start to proceedings meant that he was quickly written off as yet another expensive letdown at City, but he has slowly come into his own as the season has progressed, developing a nippy style based on close control and mazy runs even in the absence of any space to maneuver.

Playing on the left as a wide forward in a three-man forward line in support of (usually) Carlos Tevez, Silva has provided a fair few moments of magic and looks to be a splendid buy. His game still lacks an end-product, but his pacy style keeps the game moving and his intricate link-up play with Tevez is a joy to watch.

Statistics may not yet show his true worth to City, but his space on this list is justified by the fact that he remains a lone silver lining in a miserable team which really should be playing a much more expansive game when you consider the embarrassment of riches available to them.

First up, a disclaimer. Nasri is nowhere close to being a conventional wide player, and he has often played at the apex of Arsenal’s midfield this season while Fabregas has been out with dodgy hamstrings. But his versatility shouldn’t count against him, and this season Samir Nasri has probably been Arsenal’s finest player.

Turning in from the left, he has initiated exquisite moves that remain Arsenal’s forte, and finished them off if need be. He’s been touted as the player of the year for a reason, and that reason is that in an incredibly talented Arsenal squad, Nasri remains one of the few players who have taken charge this season and actually made things happen when all has not been going their way.

Arsenal’s obsession with playing a fluid and attractive brand of football often gets in the way of their motivation to score goals that will win them matches. But Nasri has shown a character to his game to complement his fine movement and close control, which makes him stick out in a team that has flattered to deceive for far too long.

No wide player list can ever be complete without a traditional left-winger bursting down the flanks and delivering inch perfect crosses. After two underwhelming seasons as a fullback, Gareth Bale’s resurrection as a ferocious winger is a reminder of the 90s and the early parts of this century, when Ryan Giggs was bombing down the left wing at Manchester United – head down, ball up ahead.

Bale seems to not have a care in the world, relying on pure speed to make space to get a cross in or cut back to a chasing Rafael van der Vaart. Bale is an exciting prospect destined for great things, even if he may not be the finished article just as yet, contrary to popular media perception. His surprising upper-body strength helps him take on the fiercest full backs on his day, and it’s evident that the man has genuinely worked hard to reach a level of respectability in the game far and is a far cry from the sorry figure who couldn’t figure in a winning game for Spurs to save his life.

And while speed can only take you so far (ask Theo Walcott), Bale possesses in his armor an accuracy and an eye for a pass that sets him apart from his peers. Not nearly as good as Lionel Messi, but be sure he’s getting there.

His constant whining and rolling around on the pitch and his generally abrasive nature make Nani a largely despicable figure. But flawed as he might seem as an individual, Nani remains an incredibly talented player who has come into his own at long last this season. Serving as the lone creative force in a pedestrian Manchester United midfield for most of this term, Nani currently has the highest number of goals/assists combined.

The added responsibility seems to have appealed to the obscenely narcissistic characteristic of Nani’s personality which is quite clearly evident, and his shift from the left wing to the right due to Valencia’s unfortunate injury seems to have liberated him, allowing him to actually cross the ball instead of merely cutting in and taking an optimistic punt at goal.

He still remains selfish and frustrating at the best of times, but the man does actually try to pass the ball a lot more than a player he’s often compared to, unreasonably – Cristiano Ronaldo – and he’s been quite a revelation this season for a Manchester United side which seems to be surviving through sheer force of will.