The inaugural FIFA Ballon d’Or list has been announced with pretty much the household names of 2010 who we would have expected.

There are however names who are in with a far greater chance of winning the title than most. Asamoah Gyan had a marvellous World Cup during a tremendous adventure for the African outfit but the chances of him raising the golden ball are highly improbable.

This articles looks at probable contenders to be crowned the world’s finest footballer. 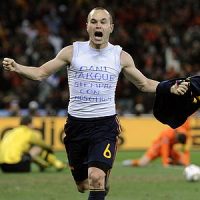 What can be said to emphasise the enormity of this man’s talent? Little Iniesta has developed into a superstar in little over two and a half years and his technical expertise have just blossomed into something genetic like in a Catalans DNA.

His involvement for both his club and country has been catalyst like. His football a season prior for his club was probably more deserving of the gong than this – but for one important fact – he scored the World Cup winning goal at a critical stage of play.

During the summer’s World Cup many people questioned (amazingly) Spain’s will to win the competition following their opening defeat to Switzerland. Spain not only bounced back with some of the most beautiful football ever witnessed in the global game, but they showed heart, and plenty of it – with little Iniesta’s presence being a huge burden on opposition teams.

His attributes are pretty unprecedented. His control on the ball is artful like and his passing prowess is majestic. His attacking emphasis has also developed so much in the last twelve months – edging forward and hovering further in the final third.

One criticism maybe his lack of goals but his contribution as a whole is astonishing – but how can you criticise this modern genius? He will go down as a Spanish legend – undisputedly following his heroics in South Africa. As a penalty shootout loomed the stocky Catalonian rewrote history as his country’s name was finally etched into FIFA folklore.

There seems to be no doubt that Iniesta will finish in the top three but will he be taking the golden ball home remains to be seen? 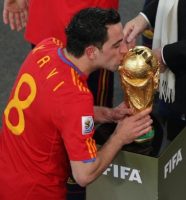 Much like his Barcelona teammate Iniesta, Xavi has just took his game onto a whole new level the last couple of years. His initiative with a ball at his feet is poetic – he motions the ball across the hallowed turf at the Camp Nou like a paint brush to a canvas. His vision and his observational play is articulate as he ponders his next move – a simple pass, a nifty one –two or just a trademark Xavi Heranadez cross-field pass to Lionel Messi.

His involvement on both national and domestic fronts fully justifies his involvement for this year’s award. A catalyst in the middle of the park for both teams as he orchestrates the rhythm and flow of the beautiful elegant football that we have become accustomed to from both outfits.

His passing ability is pretty much unrivalled by those in world football. He can spot a pass and always works on his instinct – always on the move – always looking up. His work rate is just as impressive. Barcelona’s play off the ball is just as immaculate as their forward play. They suffocate the space for the opposition as they double up and sometimes even treble up on a single player as they look to retrieve the ball. Xavi plays a huge part in that aspect and this part of his game is highly underrated.

He is a genuine all rounded midfield dynamo. He once again played his part in another title winning campaign for Barcelona and dictated pretty much Spain’s play during the World Cup with his accomplice Iniesta. This isn’t overlooking Spain’s other World Cup winners – they all had their own role to play but Xavi’s enterprise and vigour was ever so evident. 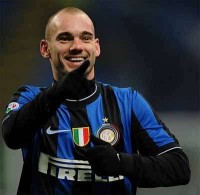 As far as debut seasons ago, Wesley Sneijder pretty much wrote the handbook this past year as he helped aid Inter’s clean sweep on domestic and European fronts.

Under the stewardship of Jose Mourinho, the Dutchman has seemingly evolved into one of the most creative and dynamic playmakers in the game. There was no doubt before his arrival to Italy from Real Madrid that he was a highly talented individual – but lacked a certain consistency – largely down to injuries which hampered him in La Liga. What was Madrid’s loss was Inter’s gain and how he fully justified his heavy price tag.

Let alone debut seasons, his match debut for Inter in the Milan derby went a long way in cementing a familiar pattern for the remainder of the campaign. He played in an integral role with his rhythmical and melodious play – such an elegant figure with the ball who also dictates proceedings much like the aforementioned Iniesta and Xavi.

One characteristic which can be labelled to the Dutchman is ‘match winner’. During Holland’s march to the FIFA World Cup final, the 26-year old got the all important winner in the quarter-final against Brazil – with his head of all the anatomy’s – uncharacteristic to say the least.

He set an example for both his club and country but it was his form for Inter which globalised his image. His contribution in their Champions League run was massive. Three vitally important goals against Dynamo Kiev, CSKA Moscow and Barcelona were crucial towards their victory. Inter became dependent on the stocky playmaker as well as Sneijder becoming dependent on his club and coach – pretty much a match made in heaven.

A treble winner and a FIFA World Cup runner-up speaks volumes. Had he been on the winning side in South Africa it may have been a foregone conclusion that he would be picking up the Ballon d’Or come the turn of the year? Nevertheless he has a huge chance of winning it despite the aforementioned.

The current World Player of the Year and as far as his abilities ago he is without a doubt the planet’s finest footballer. Will he win the award again for a consecutive year? It’s doubtful considering others have given a far more evident contribution to their club and countries.

This isn’t knocking Messi at all but with Xavi, Iniesta and Sneijder picking up World Cup winner’s medals and European Cup’s, the Argentina superstar didn’t get his hands on any such prizes.

That being said what another valiant season he produced. His performance against Arsenal in the UEFA Champions League quarter-final where he scored a hat-trick was the most beautiful one handed display’s of the year – he pretty much torn the Gunners apart on his own that night.

Had Argentina lived up to their potential and marched their way to the World Cup final then it could have been ever so different. Up until their crushing defeat at the hands of Germany, Messi was once again proving his heavy billing with some wonderful display’s – despite no goals.

He still won La Liga with Barcelona and once again he will be in the running of course. A consecutive victory however does seem questionable.

What a year for this man. Diego Forlan not only spearheaded Atletico Madrid to Europa success but he was the World Cup’s player of the tournament – his ‘Golden Ball’ award justifies that.

Uruguay oozed their way through to the World Cup semi-finals only to be beaten by a resilient Dutch side. Forlan himself scored a spectacular goal to level up proceedings before the interval but were subsequently downed come the end of the game.

Forlan finished joint top goal scorer in the competition with five goals – but his lack of assist saw the ‘golden shoe’ make its way to Germany with Thomas Muller.

His contribution was staggering. With David Suazo in towe the South Americans finished ahead of heavyweights Brazil and Argentina.

His contribution for his club however saw them pick up silverware as they brought the UEFA Europa League to the Spanish capital for the first time. His goal in the semi-final against Liverpool and his brace in the final against Fulham saw Los Rojiblancos lift the coveted title in Hamburg.

Pretty much playing at the peak of his career, it’s been the best year of Diego Forlan’s professional life. Will he top it off by being named the world’s best player for 2010?

Pretty much the world most complete striker at present, David Villa outshone again in Spanish colours as his vast contribution in South Africa played a pivotal role in their success.

A mega money move to Barcelona just before the tournament set him up to concentrate solely on his game and oh how he flourished.

He scored vital goals at critical stages such as against Portugal in the last sixteen. It is no surprise that the three men involved in that very goal were Iniesta, Xavi and Villa – Spain’s most influential protagonists up top.

He was awarded the ‘silver shoe’, like Forlan, he netted five goals but Thomas Muller ousted them in terms of assists.

He spearheaded the Spanish attack during their Euro 2008 triumph and he did it again in South Africa as Spain finally saw that golden star stitched above their crest.

To top off his year he overtook Raul’s international goal-scoring record with a goal against Scotland at Hampden Park. No mean feat by any stretch of the imagination.

Germany’s success has not gone unnoticed via the shortlist. Mesut Ozil, Bastian Schweinsteiger, Phillip Lahm and Thomas Muller have all made the cut after a wonderful year.

The Bayern Munich trio of Lahm, Schweinsteiger and Muller were all on the brink of a domestic and European treble only to be beaten in the Champions League final by Inter who subsequently achieved that very feat. The Bavarian side were stunning this season as they clinched the domestic double and provided a valiant effort on their march to the European Cup final with the German trio playing a huge part – along with Arjen Robben who also makes the list as vital goals against Fiorentina and Manchester United mesmorised Europe. Despite his injury the Dutchman made a comeback in South Africa to aid their achievement of a date with Spain in the last two.

Thomas Muller finished the World Cup’s top goalscorer and was named the tournament’s best young player. Mesut Ozil also flourished and pretty much made himself a household name in the space of a month. A highly talented a thought of individual back in the Bundesliga then saw a move to Real Madrid materialise where he is filling in the role of Kaka with relative ease.

Spain’s number one Iker Casillas is also in the running after he landed the ‘Golden Glove’ award in South Africa. Can the World Cup winning captain get those hands on the Ballon d’Or?