Premier League leaders Arsenal will take on fourth placed Liverpool in Saturday’s early afternoon kick-off at Anfield, and we could be in for a real cracker!

The Gunners, still on course for the title, are about to enter a veritable gauntlet run of difficult matches against the Premier League’s top sides. A trip to Liverpool is up first, and Arsene Wenger will know the potential of the likes of Daniel Sturridge and Luis Suarez up top for Brendan Rodgers’ side.

The Arsenal squad has answered every question asked of it this season, as despite the club’s almost yearly injury crisis, the Gunners’ strength in numbers has really shown in recent weeks.

“Our confidence wasn’t so good (at the Emirates) and you have to give credit to Arsenal, who played well in that game.

“Certainly from then we have been very good with some outstanding performances and some okay which have not quite got the results.

“We played Chelsea at Stamford Bridge and lost 2-1 and that was supposedly the best they had played all season.

“The game last week, there were a number of reasons why we weren’t at our best but we still looked like we could get a result.

“You can’t always play perfect football: we had a brilliant result against Everton but the game after that wasn’t – sometimes that is how it goes for you.

“We understand the magnitude of this game and it could give us an extra push for the remaining games.”

“For us to dominate the game and leave them as few balls as possible,”

“That will be one of our targets of course but at Liverpool the task might be a bit more difficult but the philosophy on our side has to be the same,”

1. ‘The SAS’ vs Koscielny and Mertesacker 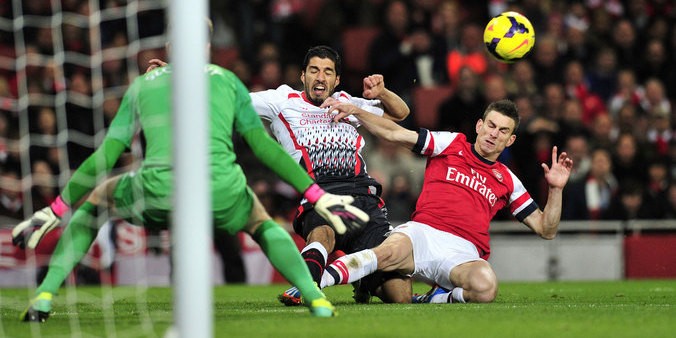 Tom says: Luis Suarez, Arsenal’s primary transfer target last summer, has blossomed into the best player in the league this season, and not even the sturdiest defence on the planet would feel confident of keeping out the Uruguayan on current form.

The 27-year-old, along with Sturridge, will give the Gunners’ defence a torrid time, and it will be up to the likes of Mertesacker and Koscienly to keep them as quiet as possible.

The Liverpool attack is ferocious and unrelenting in their pressuring of the opposition, and the cool head of Mertesacker will be priceless on Saturday, but his partner at the back Koscielny will have to provide the German with cover, as Big Per could be caught out by the sheer speed of the Liverpool front-line.

Saikat says: In the absence of Lucas, Gerrard has been given the duty of defensive midfield role, and he be severely tested against the guile and skill of Mesut Ozil on Saturday.

Although he is not naturally a defensive midfielder, Gerrard possesses a fine tactical mind, and a firm tackle in his locker. Crucially for him and Liverpool, he must not get dragged out of position.

It will be interesting to see whether Rodgers starts with Joe Allen in the side. If the Welshman plays, he could add extra protection to the Liverpool midfield and back-line, which would allow Gerrard to push forward more, as is his nature.

Saikat says: Brendan Rodgers has heaped high praise on young Sterling. He is fast, technically gifted and has matured enough this season to be guaranteed a regular place in the Liverpool team. His duel against Gibbs will be fascinating.

Had it been Monreal in place of Gibbs, I would have been pretty sure Sterling would have the upper hand. But Gibbs has excellent positional sense, is equally as fast and is a good reader of the game.

Liverpool vs Arsenal: The Result?

Tom: 2-1 – Liverpool will be just a little too much for Arsenal, I feel. It will be a tight match, and considering how brilliantly Arsenal have done up to now, they could yet surprise me!

Saikat: 1-1 – I can’t choose between the two sides! Suarez and Sturridge are just lethal together, but this Arsenal side has a real maturity about them, and it’s hard to see them losing here.

What do you think? Make sure you cast your vote in the poll above, and get involved in the comments below…