“We started this” boast The Daily Telegraph of the Fantasy Football phenomenon. And they are right, sort of. The Telegraph was the first national daily newspaper to run a Fantasy Football competition, in association with Fantasy League Ltd, back in 1994. And 15 years on, the game remains as strong, as popular, and as simple as ever. It even has the biggest names in football behind it. And Alan Hansen.

The Hansen v Mourinho head-to-head organised by the paper this season was part of a monster promotion campaign, with the “huge” prizes on offer regularly plastered all over its pages, and website. If the Guardian prefers the more reserved approach to advertisement, the Telegraph is quite the opposite. The £50,000 winner’s prize means that this is a game to be sold to the public, and that’s exactly what has happened. People (myself not included) don’t even mind paying £3 per team, I wonder if The Special One coughed up though?

One of the best things about the game is the simplicity with which it can be played. No tactical masterclass needed to set up your side here, no economics degree required to work out how best to utilise your budget, just plain and simple football. A traditionalists’ dream.

The Telegraph is a bit behind the times at the moment with regards to budget, no Chelsea-sized transfer kittys here. Each side gets £50m to spend at the start of the season, which means that a number of players have values that do not exactly correspond with their real life equivalents- £5.6m for Steven Gerrard anyone?

No squads here. The Telegraph’s insistence on sticking firmly to its roots means that the “squad game” is not something to worry about for new managers. As are most of the new-fangled tactical systems deployed by your Scolari’s, Benitez’s and…erm…Hughes’. Eleven players will do the job here, and it will be either 4-4-2 or 4-3-3 as well. Got that?

One thing that is interesting about the setting up of a team is the lack of restriction with regards to the number of players permitted from each club. Most games, sensibly, limit teams to 3 players per Premier League club, but TFF has decided that Free Love did not die out in the 1960s and that if you want to fill your side with your favourite team’s players, then you can. Ideal if your club is Stoke City, not so much if it is Chelsea. 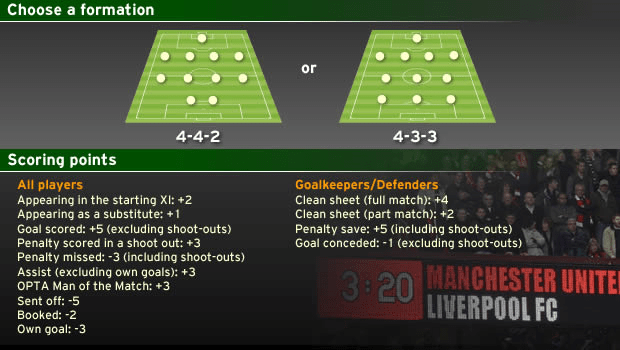 Like most things with TFF, the points scoring system steers clear of too much complexity. The usual suspects are all there of course, goals, assists, clean sheets, cards, and the handy “OPTA man of the match” award, which gives the less spectacular players a chance to pick up 3 bonus points for a good performance.

Unlike Guardian Fantasy Football, TFF leans perhaps towards the attacking element of the game, rather than the defensive side. This means that goalscoring midfielders are a must, and clean sheets matter far more. With -5 points for red cards, discipline is also a key issue.

As you might expect from the system above, the top points scorers this season are somewhat predictable, unlike in GFF:

As you can see, only Vidic & Arteta appear in both GFF & TFF’s top ten scorers so far this season, whilst Vidic is the only defender to appear in the TFF top ten, a testament to the difference between the games. It means that, naturally, there is a leaning towards the bigger-name players in TFF, but for traditionalists who don’t like to analyse the game too deeply, it will appeal.

This seems to be one area that most of the major Fantasy Football games can’t agree on. Fantasy Premier League allows a free transfer per week, with points penalties for every transfer after that, whilst GFF limits its transfer activity to five a month. TFF opts for a yearly transfer allowance of 30, meaning that you really have to think your switches through. No rushed jobs here, as you could find yourself stuck with a bum team, and no transfers if you blow them too soon.

Player values do not fluctuate throughout the season, which means that bargains can be easy to pick up- Stephen Ireland & Amr Zaki immediately spring to mind this season- but it is still a difficult task, and each of those 30 transfers seems somehow precious.

This is one area where TFF does excel. A league featuring more than 20 players (not inconceivable for most work/school/friends leagues) can receive some pretty smart gifts:

As an extra bonus, when setting up your league you’ll have the option of adding punditry legend Alan Hansen. He plays TFF this season and will no doubt be highly confident in his ability to select a better team than you. What better incentive to those who find his Match of the Day comments a little too know-all. Just imagine him telling you that “you’ll never win anything with kids” and hopefully you’ll put him to shame like Fergie did in 1996.

Each Super League has its own private message board for members to keep in touch (and keep the banter going) and all of the league tables are updated every day. It’s a good system, one which helps make TFF pretty damn enjoyable.

Every valid Super League (5 teams or more) automatically qualifies for the League of Super Leagues. This league is compiled by taking an average score of the top five teams in every Super League – so the bigger your league, the better your chances of topping the table, with prizes on offer (see prizes below).

Similar to Fantasy Premier League’s “Head to Head” league system, TFF Super 20s is the new way to enjoy fantasy management and gives you an extra way to add excitement to the season. It’s great fun and doesn’t affect your team’s position in any other league.

All teams registered before Friday September 05, 2008 were automatically entered into the Super 20s competition. Here’s how it works:

Score more TFF 08/09 points than your opponent that week: +3 pts

Score less than your opponent that week: 0 pts

Points from these head-to-heads will be used to generate a separate league table of the 20 managers in each league. The highest placed manager in each Super 20s league at the end of the season is the champion!

In addition to the Super 20s, there is also a TFF Cup which runs from January to May, the premise is the same as any other Cup system, with random draws pitting teams against each other, and the highest scoring team progressing to the next round.

You have to hand it to TFF, as gimmicks go, this is a belter. Take on know-all pundit, one know-all manager, put them together and what do you get? Hansen v Mourinho. At the start of the season, Jocky & the Special One picked their respective teams, and since then TFF players have been able to track the progress of the two teams.

And whaddya know? Alan Hansen is a better manager than Jose Mourinho, it’s official. He currently resides in 7,222th place, some 105,000 places (and 133 points) better off than the Internazionale supremo. Granted, he may have slightly more time on his hands, but I’m sure Jocky will be pretty pleased with himself currently.

If you are interested, here are the two men’s respective sides:

Admittedly, Mourinho has been slightly unlucky, having picked the likes of Michael Essien, Ricardo Carvalho & Fernando Torres at the start of the season, but Hansen’s side features four of the top ten points scorers this season, with a Chelsea/Liverpool defence that is hardly likely to concede many.

Another area where TFF excels. This season’s champion will walk away with £50,000. But there are plenty of other ways you can cash in. There is a total prize fund of over £1,100,000 to be won during the season, some Premier League clubs don’t get that themselves over the course of a season.

That’s right, there’s an incredible one million pounds to be won if you kick off the season with what, by the end of the season, proves to be the Perfect Starting XI – in other words, the best possible valid team within the £50m budget.

Whatever transfers you make after the season kicks off won’t matter for this prize – it’s all about who you had in your team at 12.45pm on Saturday, August 16.

Take a look at last season’s Perfect Starting XI. Doesn’t look so difficult does it? 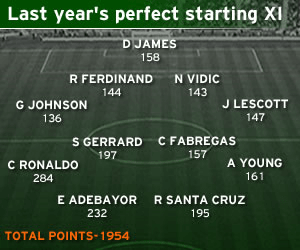 You can have up to 10 attempts – so if you decide to enter more than one team, the first 10 you select will be eligible for the big prize.

Elsewhere, the prize giving doesn’t stop there, see below: 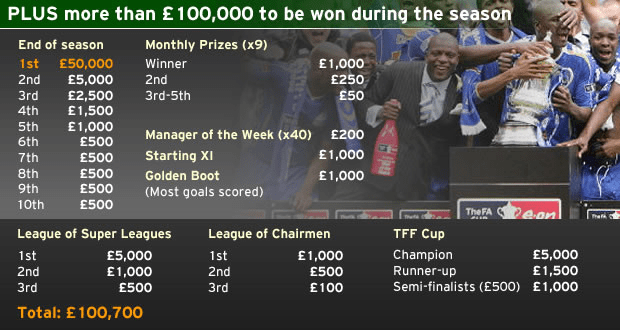 It’s mighty impressive stuff, all made possible by the £3 per team (or 2 for £5) fee, and many players’ undying loyalty to the first of the mainstream Fantasy Football games.

In addition to the main TFF game, fans of lesser clubs now get the chance to show off their own encyclopaedic knowledge of lower league football with the Telegraph’s Championship, League One and League Two games. It adds a bit of extra fun to Saturday afternoons, and there is always something a little bit special about seeing that last minute Adam Le Fondre strike flash up on the Gillette Soccer Saturday vidiprinter, even if it does mean that Matt Williamson loses his clean sheet bonus in the process.

Simple to navigate, but without too much emphasis on presentation. That seems to be the modus operand of the Telegraph site. There are some useful Insider’s tips; the Telegraph’s football coverage is pretty decent, and there are plenty of stats and graphs to get your mathematical teeth into. All in all, it’s a pretty good game to play. It’s just tight arses like me who refuse to pay!