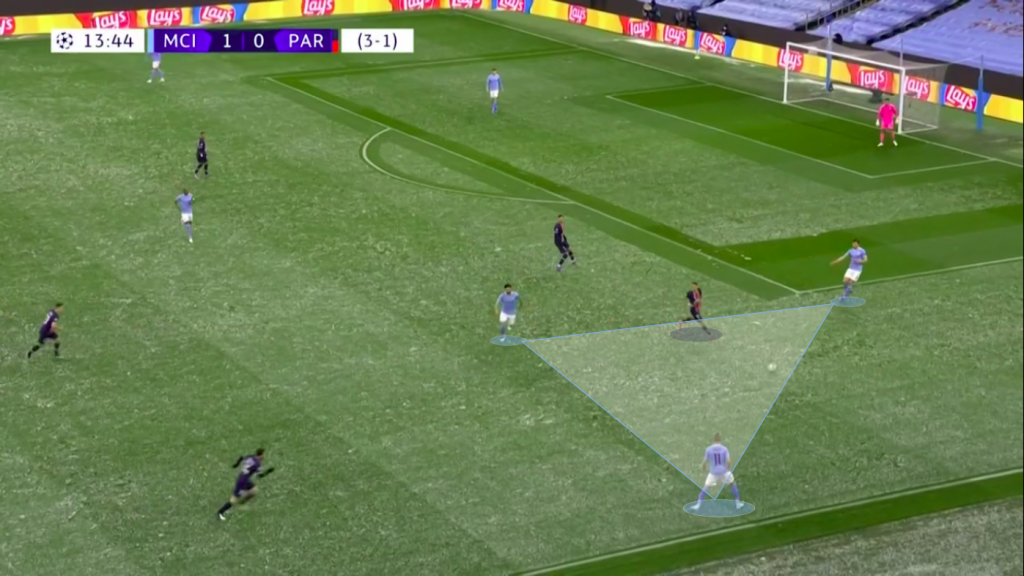 With a hard-fought 2-1 lead from the first leg in hand, Manchester City hosted Paris Saint-Germain at the Etihad Stadium for the second leg of their UEFA Champions League semi-final tie.

In just their second-ever semi-final in the tournament, the home side had the chance to make it to the finals for the first time in their history.

However, their opponents were never keen on letting them by easily, having ended up on the wrong side of Europe’s biggest club football match last season against Bayern Munich.

With Idrissa Gueye suspended and Kylian Mbappé failing to start due to an injury, PSG had a couple of problems to deal with. Their task got tougher when City took the lead 11 minutes in, going on to double their tally in the second half to secure a historic 2-0 win.

In this analysis, we will try to take a deeper dive into the tactical set-ups used by either side, focusing on City’s successes:

For once, City were outmatched in terms of possession as PSG saw over 55% of the ball.

The visitors had some interesting ideas with the ball, as Marco Verratti dropped back alongside Leandro Paredes in a double pivot ahead of the centre-backs, while Ander Herrera often joined the wingers in congesting the central region between the lines or drifted out wide. 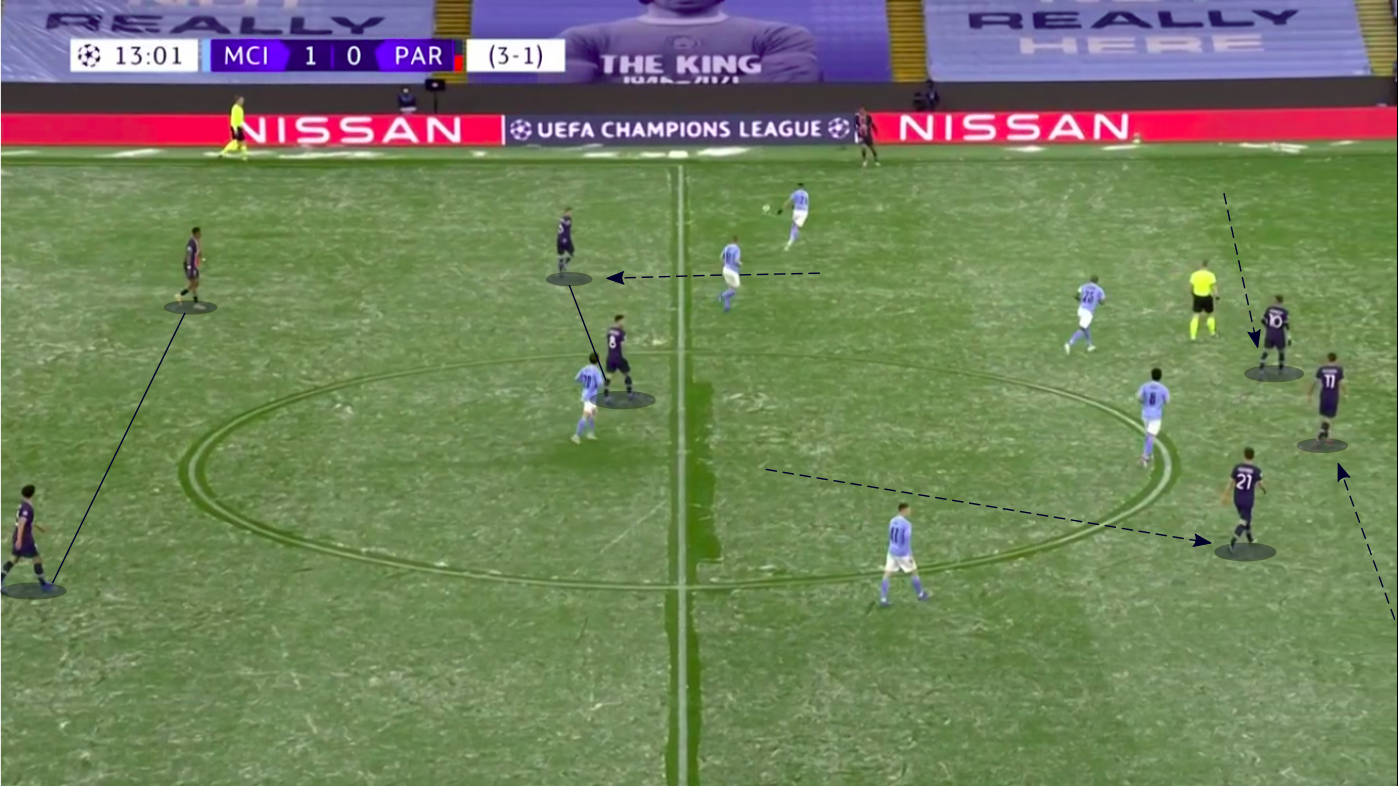 This system meant that the French champions severely lacked width in their attacks, as their passmap proves:

Quite evidently, both wingers are terribly central in their average positions, while they are too vertical in front of the midfield as well.

This meant that a moment of individual brilliance would be necessary for PSG to unlock the City defence, and sadly for them, it never came. Otherwise, most of their 55% of possession ended up being quite useless in terms of attacking threat.

Now, let us focus on how City attempted to defend against this.

City’s pressing structure remained unaltered from their updates midway through the first leg, so it was once again a sort of a 4-1-3-2 where İlkay Gündoğan pushed up from midfield to keep an eye on the deep PSG midfielders – Verratti and Paredes.

A minute yet important detail was that Kevin De Bruyne and Bernardo Silva had switched side from the first leg, with the Belgian international now moving to the right. 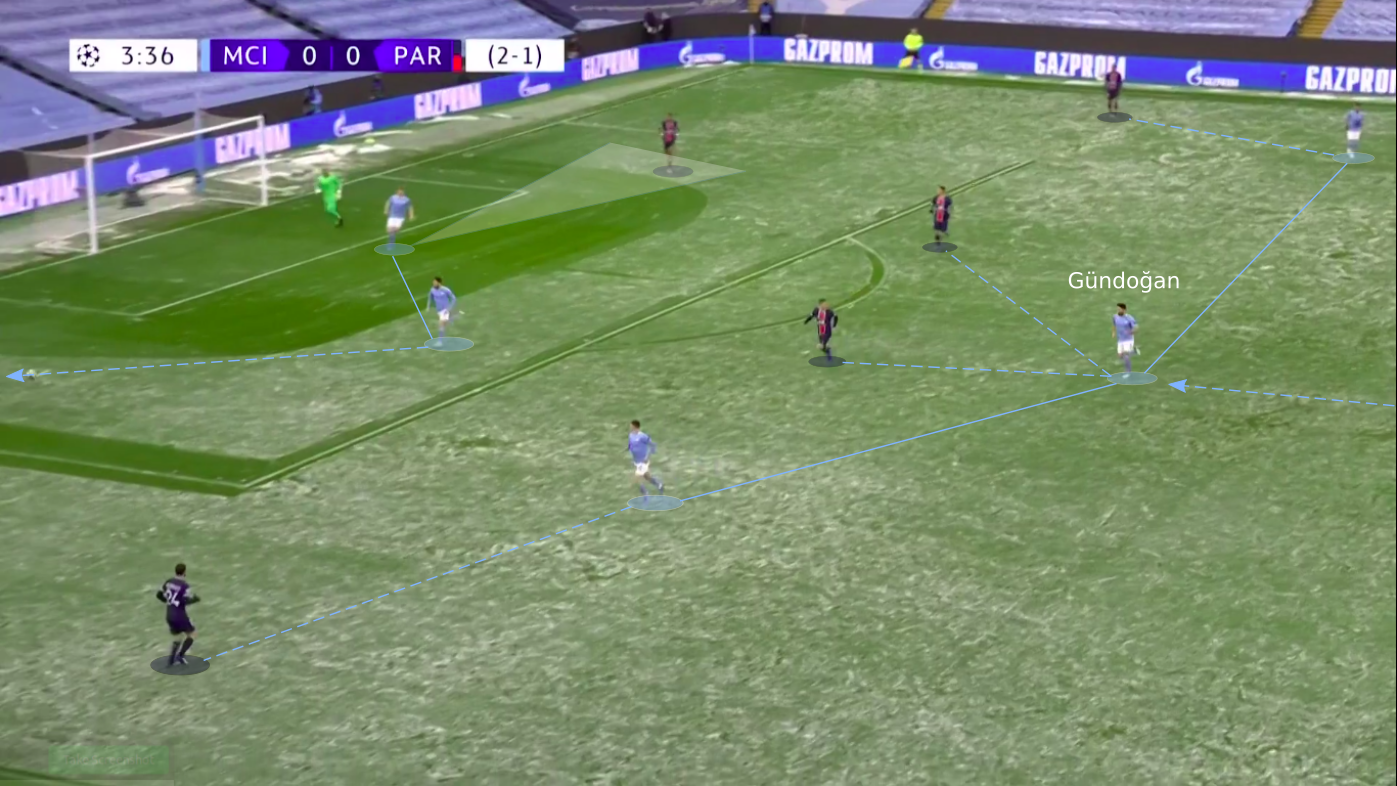 However, City did very little of such high pressing, especially in the first half. Instead, they were more than happy to sit in a 4-4-2 mid-block and allow their opponents to pass around at the back, as the visitors’ lack of width in attack meant that there was little they could do to stretch this defence. 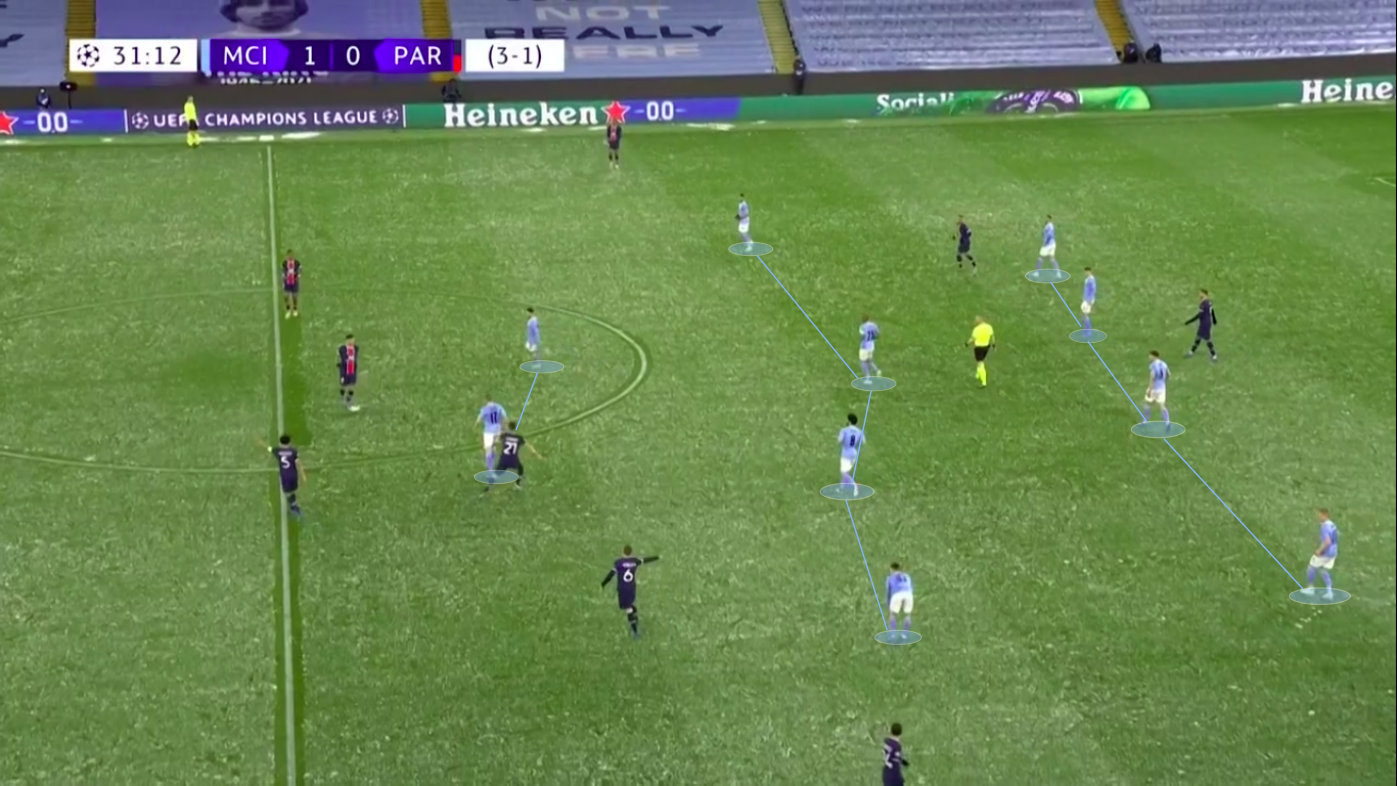 PSG often found ways through the midfield with the help of their overload, especially through Neymar, who moved into such central positions (as previously discussed) to receive passes that bypassed the City duo of Fernandinho and Gündoğan. 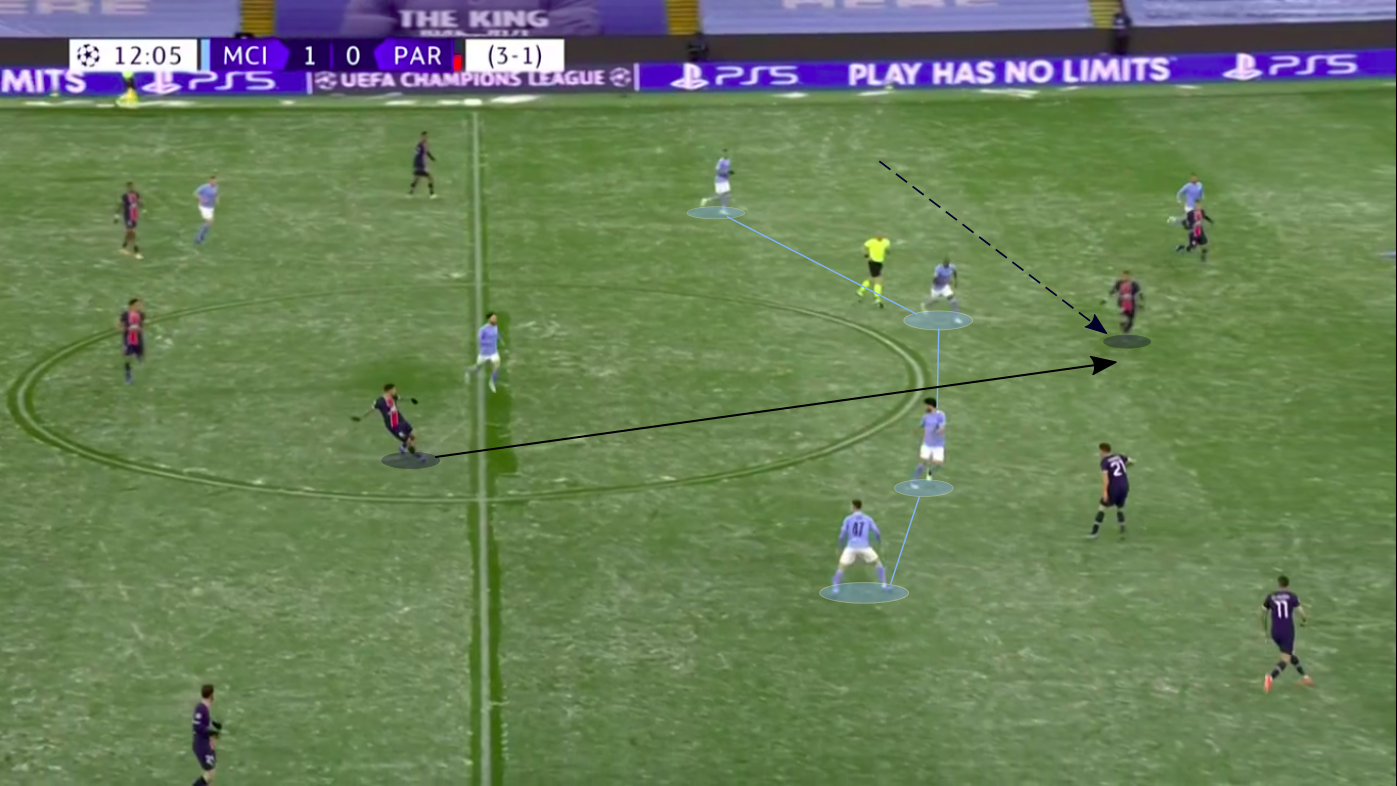 Although he was a left winger on paper, the Brazilian international did a lot of work in zone 11 and zone 14 (the central areas of the attacking half), as is evident from his average position and the fact that nearly a third of his touches were taken in those regions. 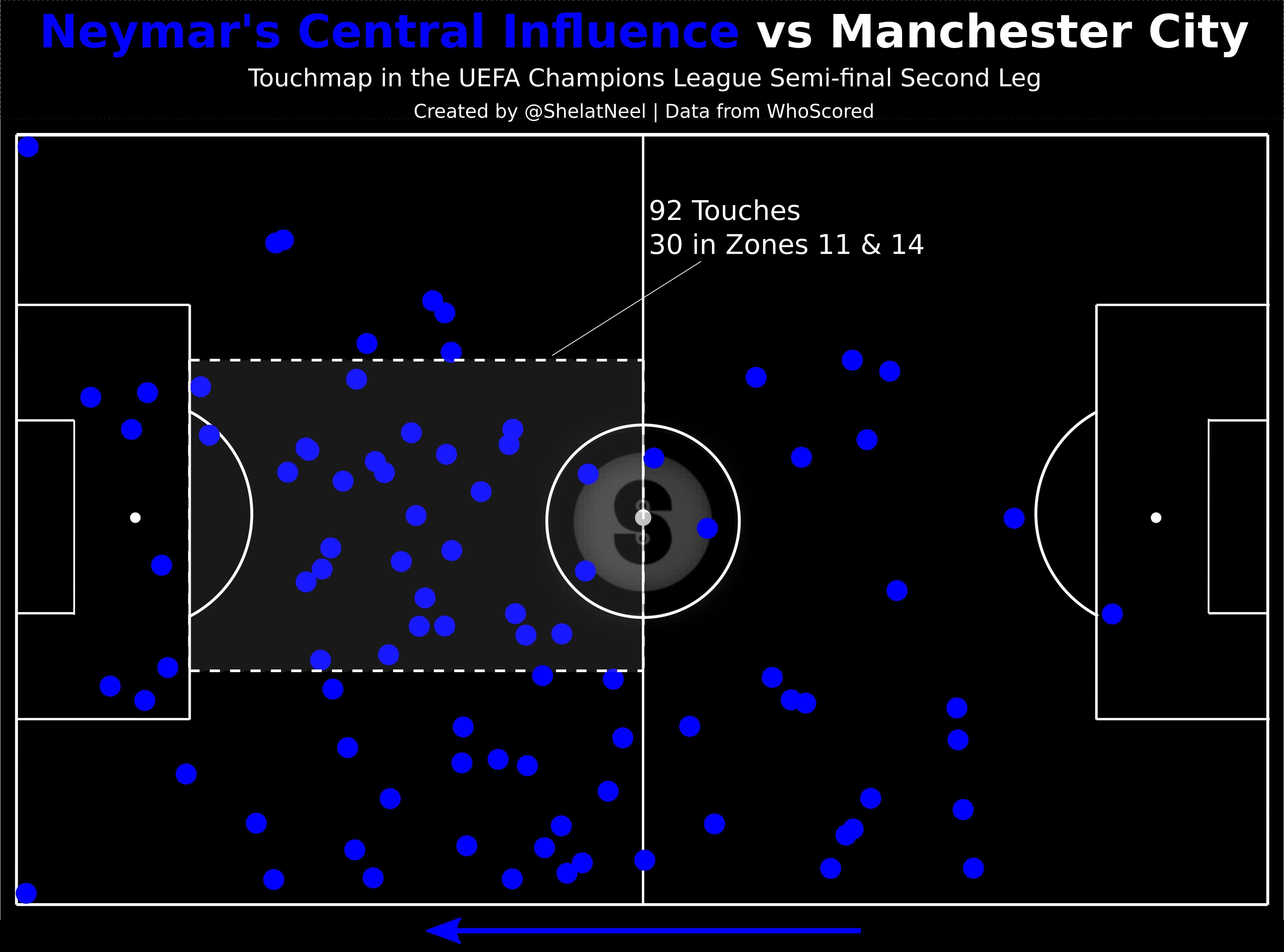 Therefore, PSG often got into such dangerous areas, but their threat in front of goal was quite minimal. This was partly because their final ball was poor (often due to the lack of attacking teammates available in dangerous positions), but a lot of credit must also go to the  City defenders, who were certainly brilliant in this match. 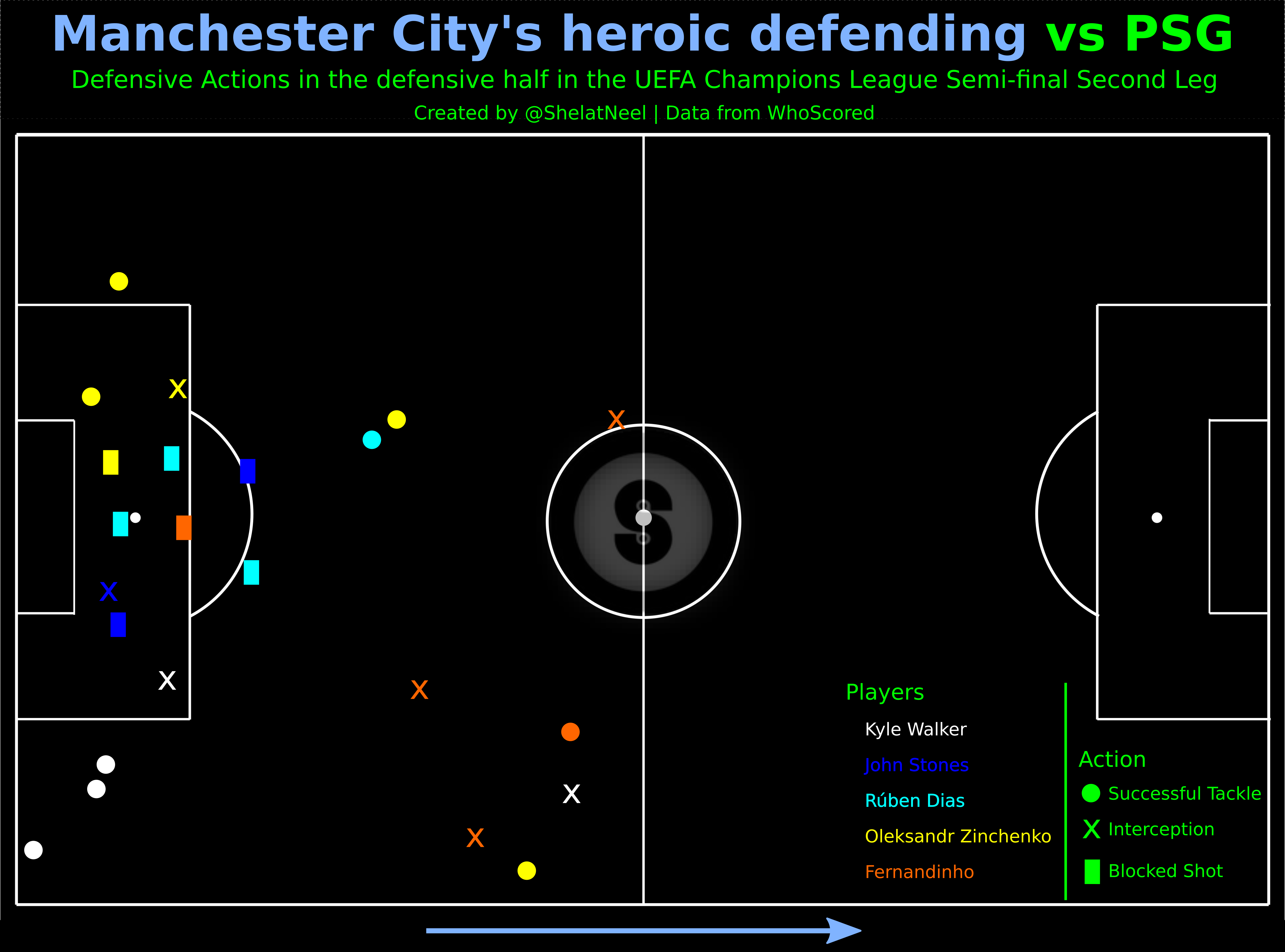 This amount of defensive activity meant that PSG failed to hit the target with a single one of their shots, while nine of their 14 efforts ended up being blocked.

Even though they just kept 44.1% of possession, City did a few intriguing things in possession.

Before we take a look at those, though, let us quickly gloss over Paris Saint-Germain’s defensive shape – a narrow 4-4-2 which saw Neymar move up front alongside Icardi. 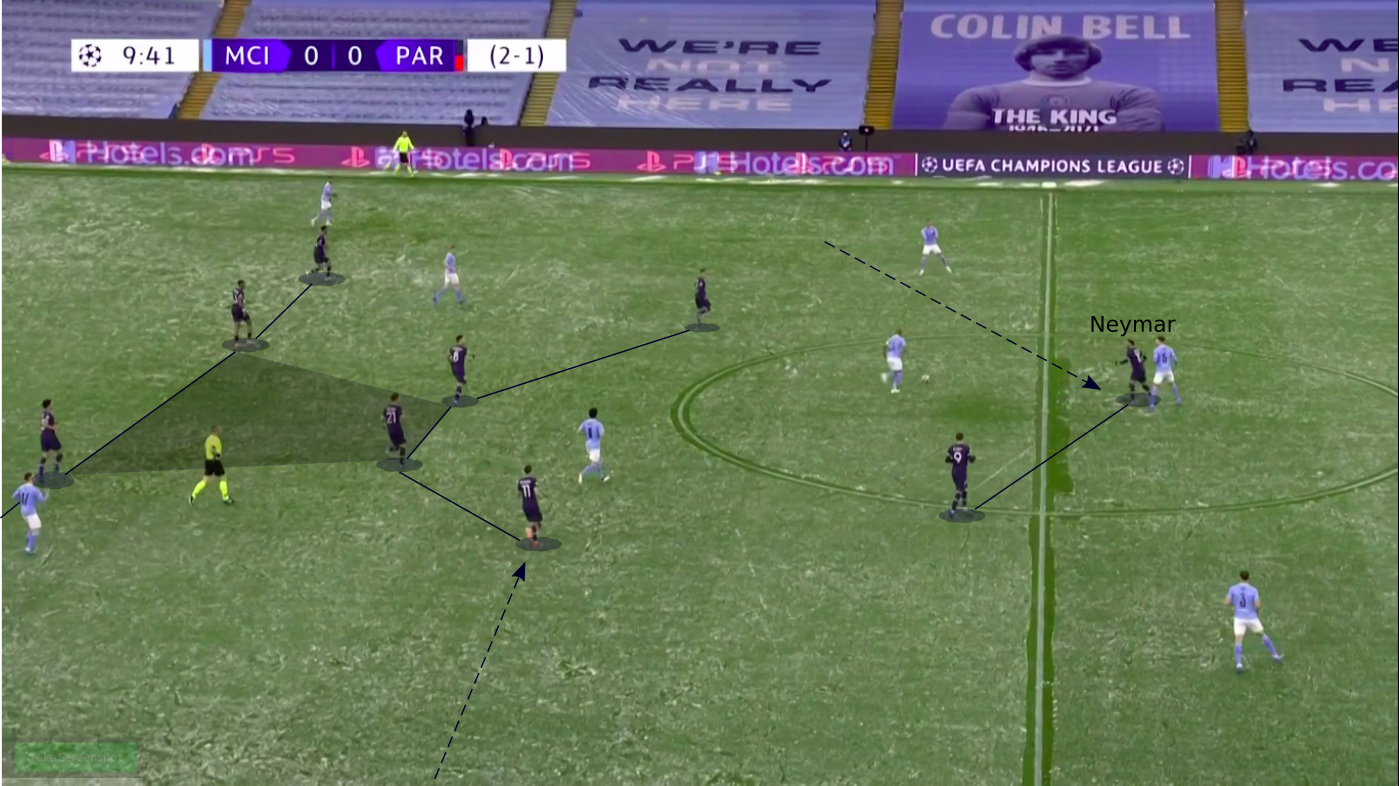 Evidently, their main motives here were to keep the midfield as compact as possible and minimise the space left between the lines.

City’s system in possession was a significantly altered one from what we have seen lately, but there was good reasoning behind those changes.

With a lead from the first leg (including two away goals) in hand, the hosts’ primary objective was not to concede.

Pep Guardiola is a firm believer in the ideology of defending with the ball, and he certainly did so here, as his 2-4-4 in possession was about as immune to counterattacks as humanly possible with the two midfielders and full-backs providing all the protection needed as they were incredibly cautious while pushing forward. Unsurprisingly, PSG failed to register a single shot from a counterattack. 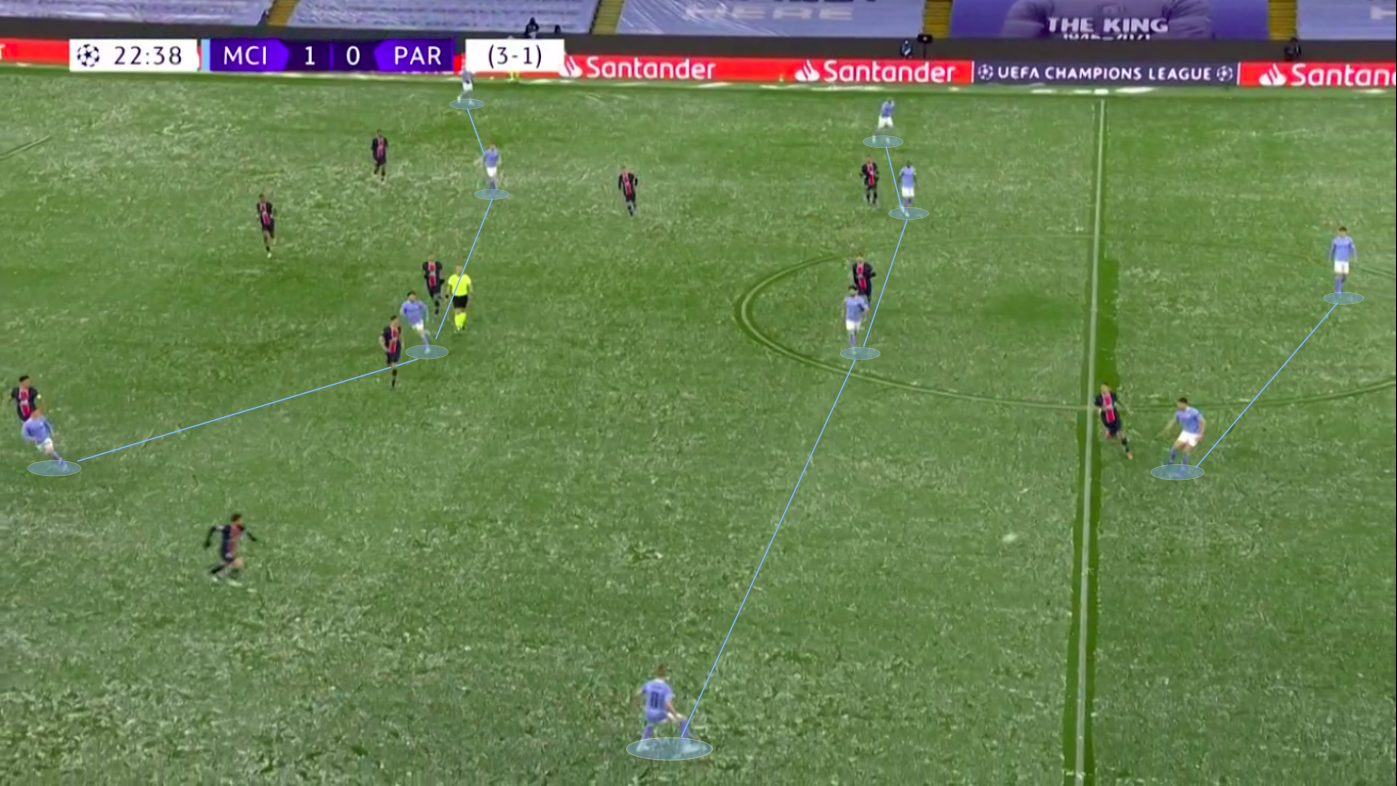 This was, of course, a huge diversion from the 3-2-5/3-2-2-3 we have become accustomed to seeing, but it did allow City to keep the ball in a very safe way. Passing triangles were quite easily formed in this system, with the most common ones involving a centre-back, full-back and central midfielder – Rúben Dias, Oleksandr Zinchenko and Gündoğan in the below instance. 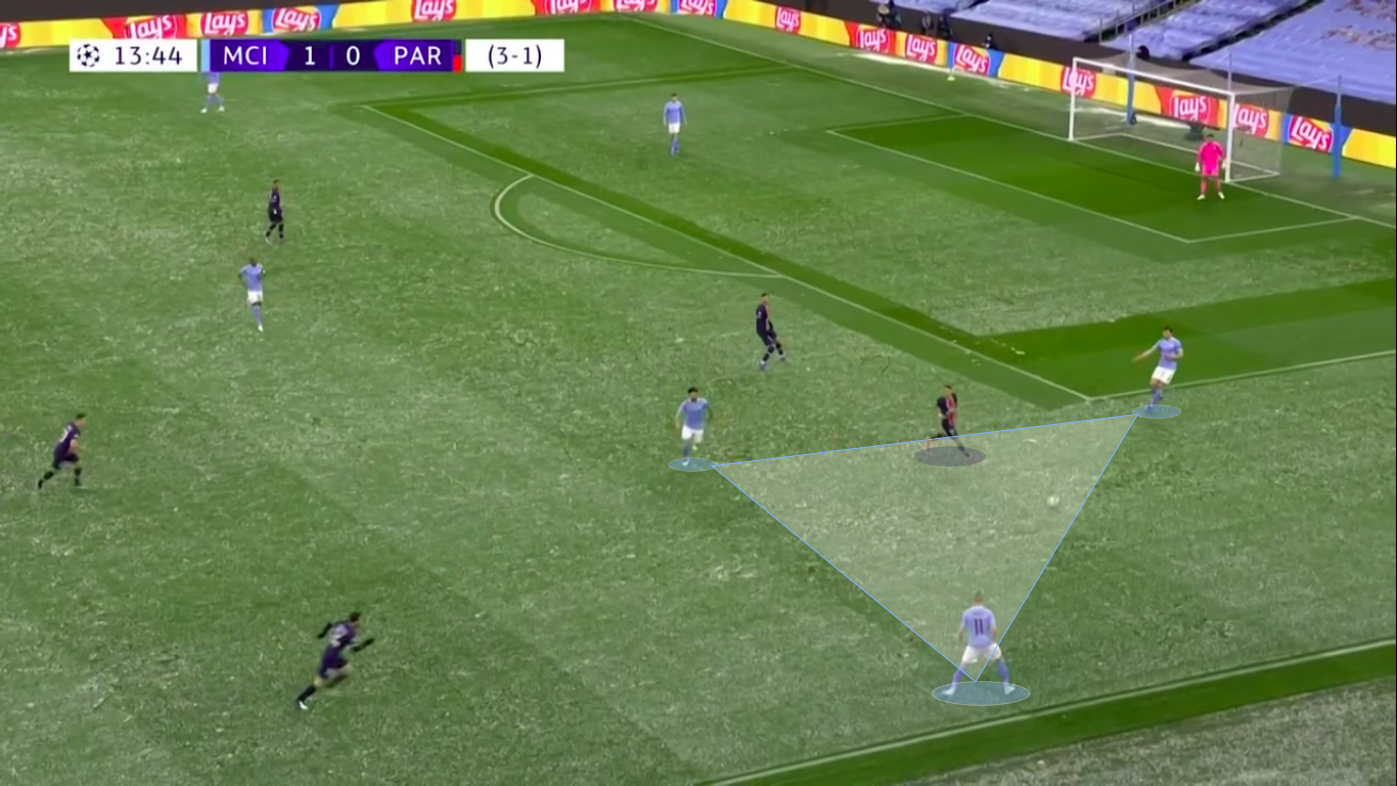 Such passing triangles not only ensured safe possession, but they also served to draw PSG forward to try and win the ball back, which in turn would stretch their defensive shape vertically.

The opening goal came as a result of just that. A pinpoint long ball from Ederson to Zinchenko after he was found using a simple backpass drew PSG in, and their stretched defence failed to cope with the full-back’s run. 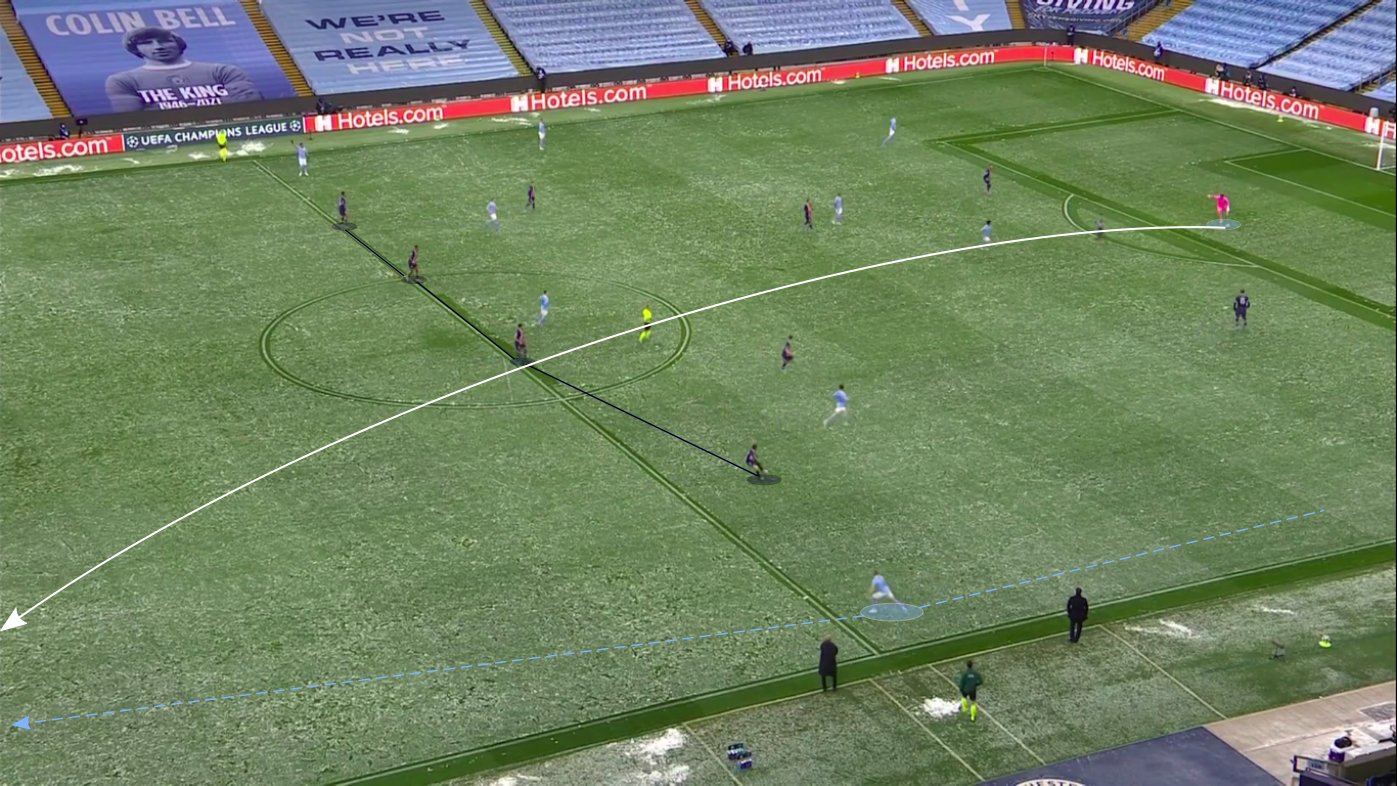 The visitors’ midfield was left effectively non-existent in transition due to their movement forward when the ball was played backwards to Ederson, which is why the Ukrainian international could easily find De Bruyne in space at the edge of the box with a cut-back. 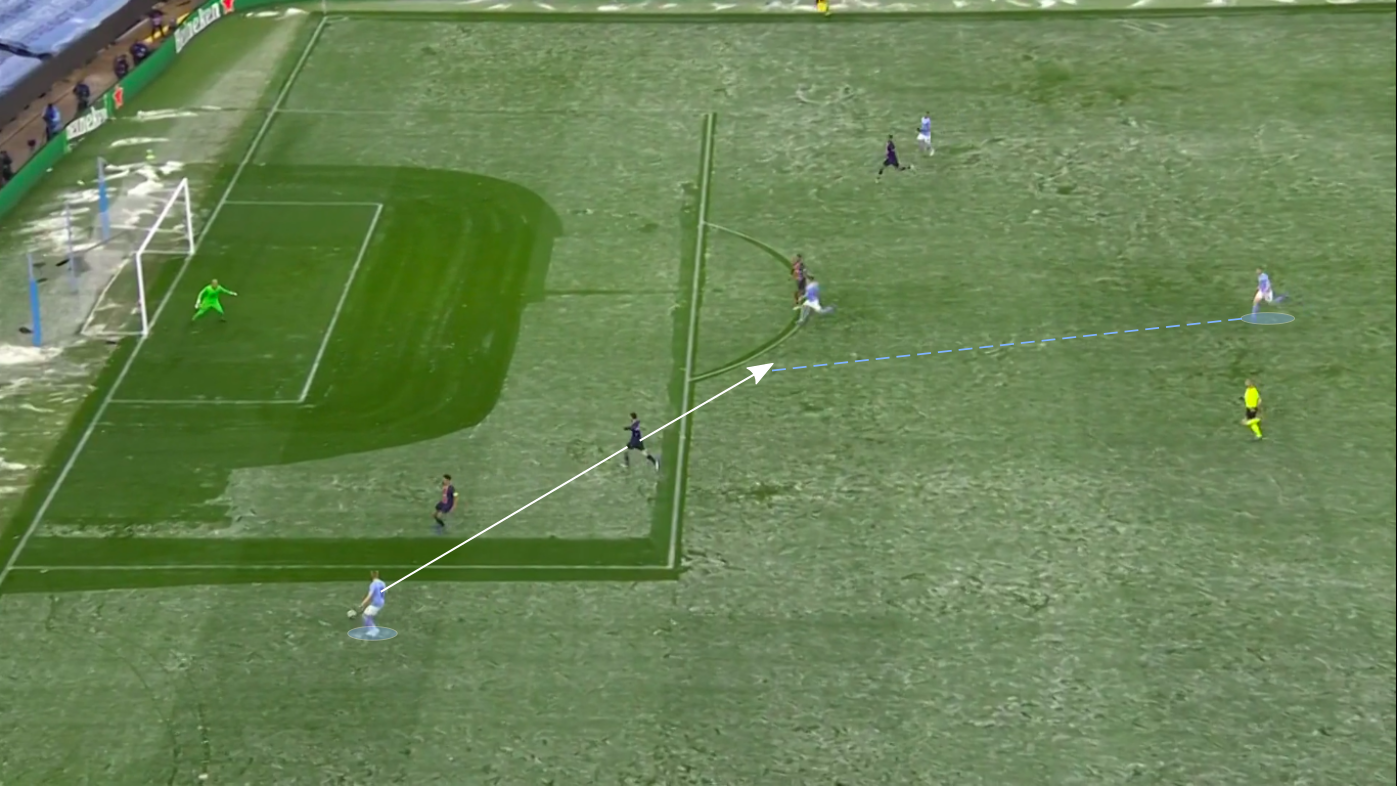 Although the ex-Wolfsburg man’s shot was blocked, Riyad Mahrez was there to capitalise on the loose ball by slotting it home for 1-0. 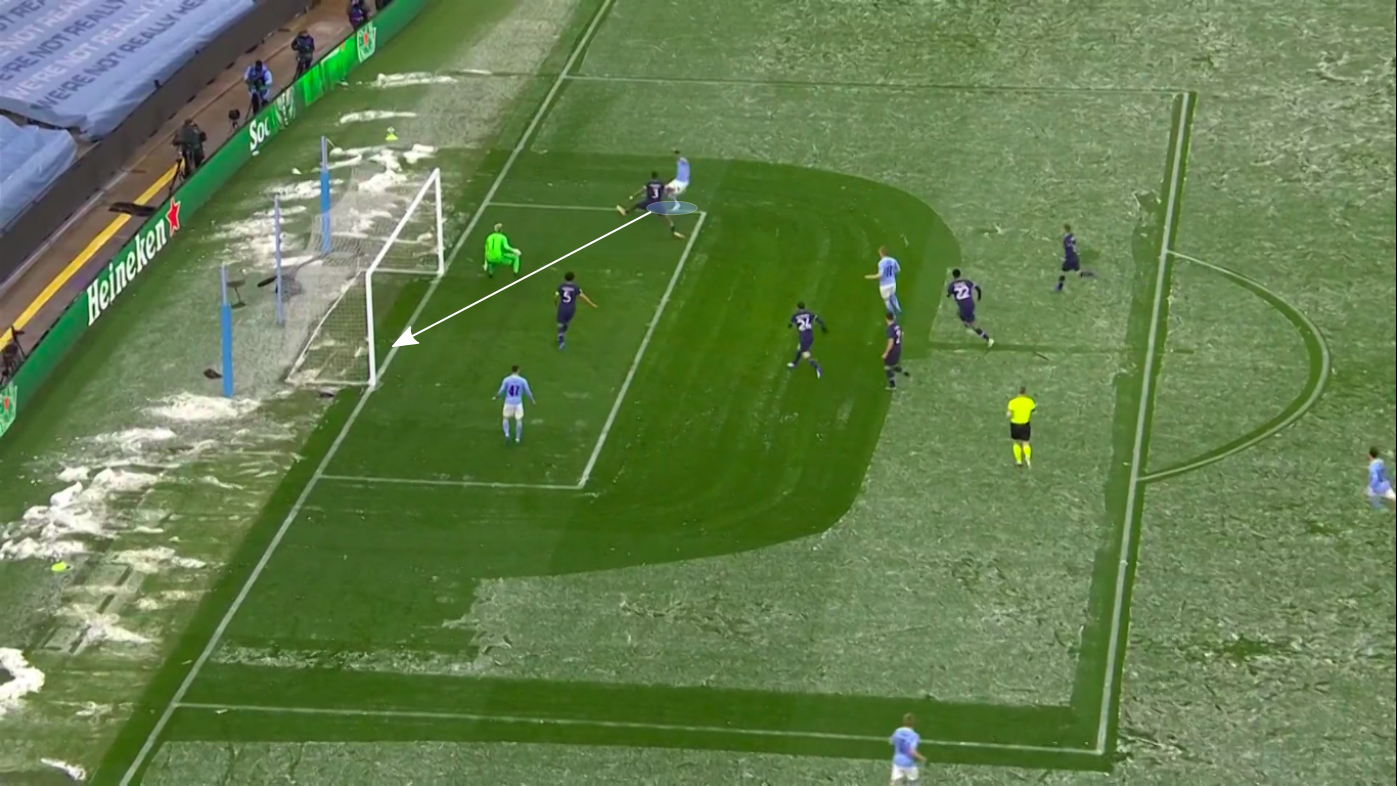 The second was a textbook counterattack, which originated from a set-piece scenario. 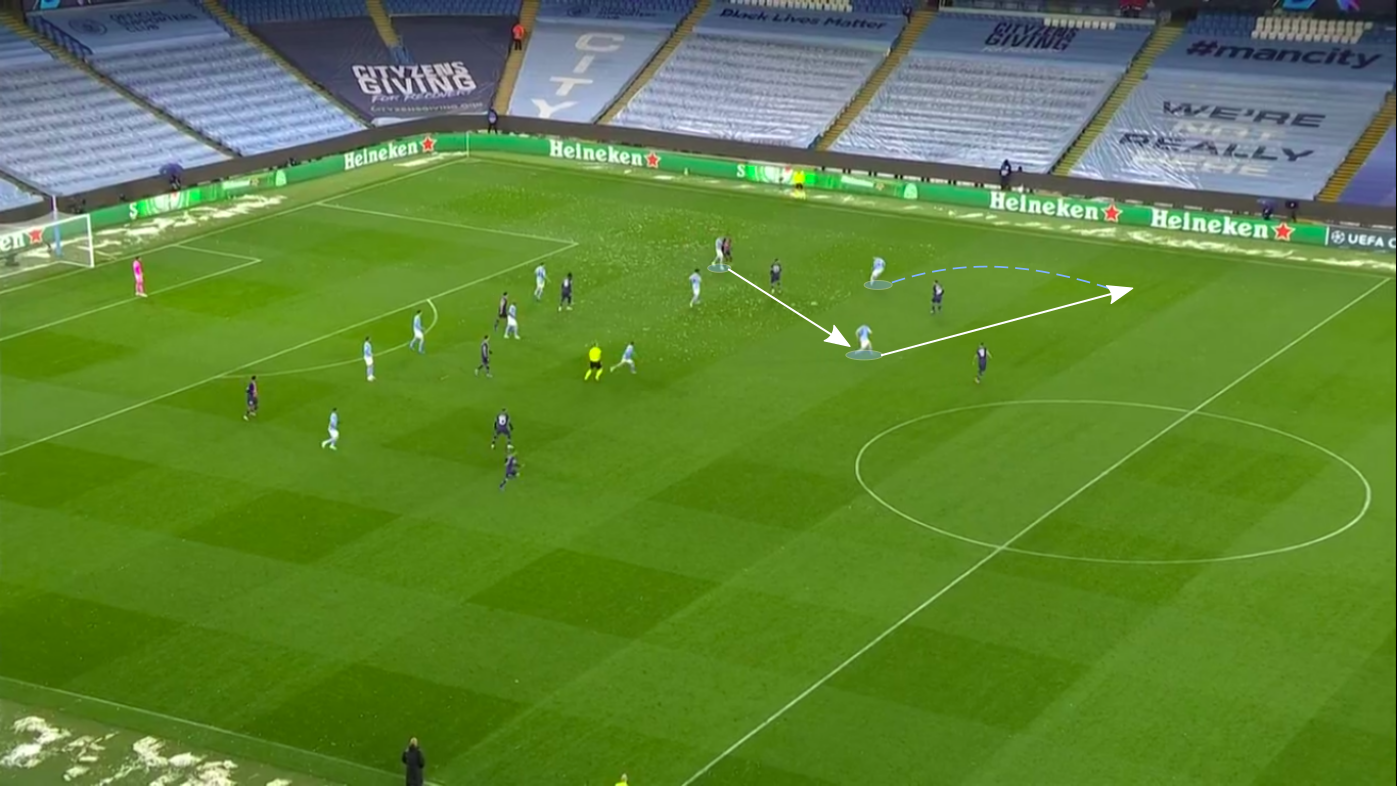 Phil Foden used his pace to carry the ball forward against a retreating PSG defence, using De Bruyne’s help to get into a great crossing position. 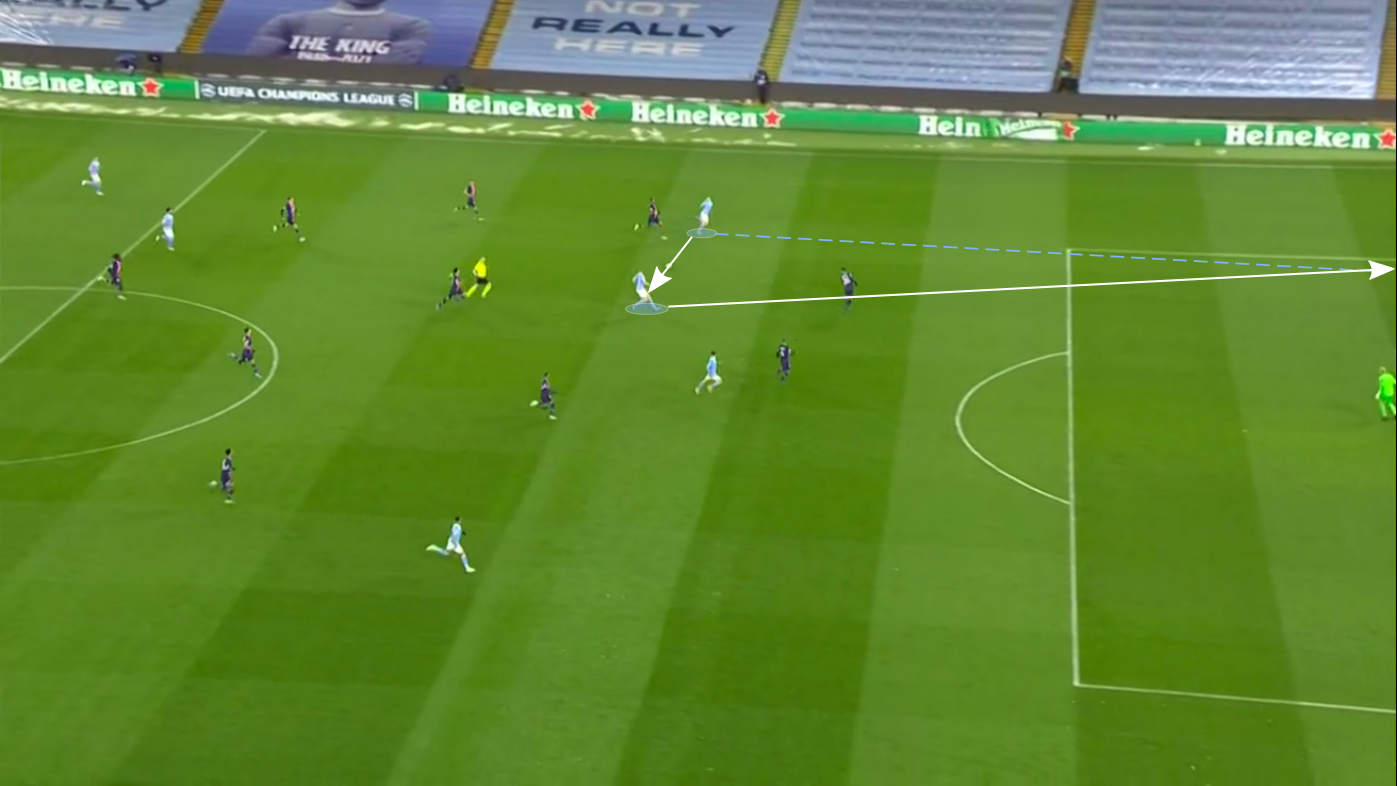 The young Englishman put in a perfect low cross for Mahrez, who could not miss from such a position. 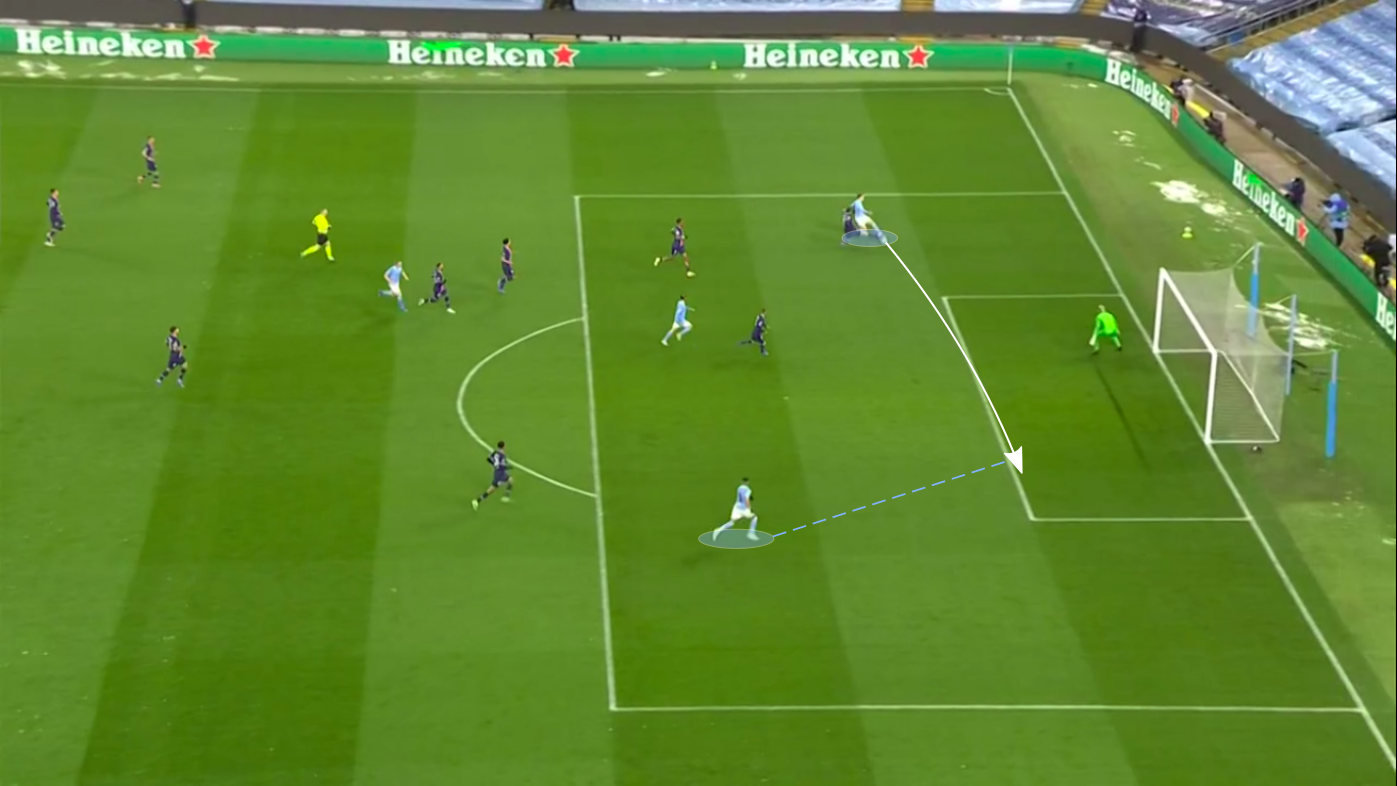 If there somehow were any doubts regarding City’s unstoppable quality still lingering, they will have surely been dispelled with this dominant victory.

Guardiola’s side showed great pragmatism and adaptability in an altered system that helped them secure a spot in the final quite comfortably, even if it did not fit the possession-heavy brand they have maintained this season.

The home side absolutely ended up breaking PSG, who collectively lost their heads late on after Ángel Di María’s sending off, which completely killed the match off.

City have the Premier League all but wrapped up and are just one victory away from a historic Champions League triumph that will surely make this an incredibly successful campaign. The blue side of Manchester is certainly a happy one.

By contrast, some people are already starting to question Mauricio Pochettino’s position as PSG manager.

While that is certainly too reactionary, the Argentine manager was thoroughly outclassed on the tactical front here. His relative lack of success in Ligue 1 (although some of that must also be attributed to Thomas Tuchel) is also a cause for concern.

Therefore, he and his players certainly have to get their act together for the biggest domestic prize on offer to them at the very least.