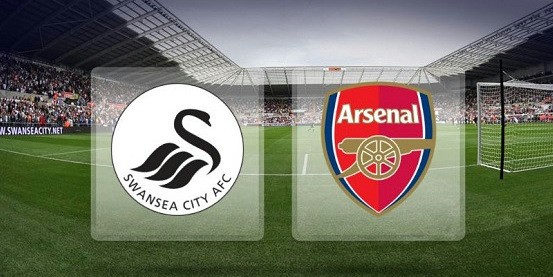 Arsenal will face Swansea City at the Liberty Stadium on Saturday, looking to extend their impressive away record to eight consecutive victories.

The Gunners are on a rampage here. After the opening day debacle at the hands of Aston Villa at home they have bounced back strongly, winning the next four matches on the trot, securing the top-spot in the table along with North-London rivals Tottenham Hotspur.

The signing of Mesut Ozil, the goal scoring form of Olivier Giroud and the resurgence of Aaron Ramsey has changed the atmosphere, body language and mentality of the Arsenal camp completely. Suddenly the expectations are more acclivitous like the barometer readings of a Sub-continent summer, and no longer are people concerned with top four places rather the hubbub of challenging for honours is ringing all around the Gunner-sphere.

They are the only team in the league to have scored in all five of their Premier League games this season. They have the best shot conversion rate (20.4%) and shooting accuracy (61.1%) in the league while the new darling of Arsenal, Mesut Ozil has already assisted (3) more Premier League goals than any other player this season. No wonder, why Arsene Wenger’s side are bubbling with confidence, despite missing so many stars through injuries.

Manchester United manager David Moyes had fret about the tough fixture handed to his side. But they are not the only one to be the victim of it. After their six opening games, Swansea under Michael Laudrup will have faced four teams of last year’s top eight already, and the Dane is not whining about it.

The Swans have bounced back strongly in the league, after their opening 4-1 defeat at the hands of Man Utd. Michu has found his goal-scoring form again and has netted his fifth goal of the season in the last League match against Crystal Palace. On the flip side, they have just collected one point from their two home games so far, and their mid-week defeat to Birmingham City in the League Cup won’t boost the morale any further.

Swansea skipper Ashley Williams is a major doubt for this tie. The Wales defender has been suffering with an ankle injury and is highly unlikely to feature against the Gunners. In his absence, Laudrup will recall Jordi Amat to marshal the defence. Also, winger Pablo Hernandez will miss out through hamstring injury.

Arsenal have a long list of injuries to deal with but the good news is several of their stars will return back within next month. Midfielder Aaron Ramsey (thigh) and Mathieu Flamini (shoulder) will undergo a late fitness test ahead of the trip, but Arsene Wenger expects them to be ready for the match. Theo Walcott is expected to be out for another three to five weeks following stomach surgery.

Olivier Giroud – The Frenchman may have a poor passing accuracy of just 63.1% in the league but he has already racked up four league goals and an assist to his name.