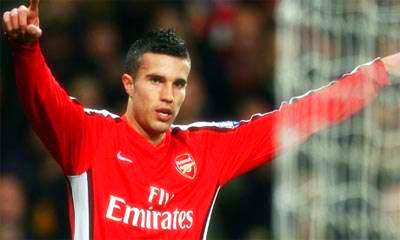 For a professional footballer there is nothing worse than being injured, but with the physical nature of the sport, injuries are always going to happen. Despite the modern day footballer honing his body to become a complete athlete, knocks, niggles and ailments can take their toll.

With important fixtures piling up thick and fast at this time of the year, managers pray that their star players stay fit, and will try just about anything to speed up the player’s rehabilitation if they get injured. Here are a number of alternative medical treatments from the world of football.

A growing phenomenon in sporting medical circles is the use of horse placenta to treat muscle tears. Robin van Persie is probably the most high-profile case of a player undergoing the treatment, but Frank Lampard and Glen Johnson are thought to have tried the strange method also.

Serbian woman Marian Kovacevic is said to charge €3,000 per session, but her methods have come under scrutiny from the authorities. Despite this, Van Persie is said to have benefited from Kovacevic rubbing the placenta into his damaged muscles, and has heralded her as ‘a miracle’ in the past.

Glenn Hoddle and his faith healer Eileen Drury are the most well-known case of this eccentric treatment. The former Tottenham midfielder claims that Drury helped him recover from injury during his playing career, and duly hired her as a consultant for the England team during his management at the 1998 World Cup.

The nation’s players did not take the unorthodox methods as seriously as their manager however, with Ray Parlour famously asking for ‘a short back and sides’ when lying on Drury’s treatment table.

“The specialist said my hamstring was too tight and I had goats’ blood injections. That’s the best for loosening it off.”

Both Florent Malouda and Robin van Persie have claimed to be more injury-free after having teeth removed, as dental issues and muscle injuries have been linked by some osteopaths. The Chelsea winger accredits the removal of wisdom teeth for an upturn in fitness and form in his early days at Stamford Bridge.

In South America altitude can be an issue for certain teams and players, with Bolivian team Blooming giving their players Viagra before games at large distances above sea level. The sex drug is believed to help combat altitude issues due to increased blood flow, and some teams competing in the Copa Libertadores use the drug also.

Many Dutch players have defied medical opinion by recovering from muscle tears in a fraction of the expected rehabilitation time due to Feyenoord physio Dick van Toorn. The likes of Rafael van der Vaart, Wesley Sneijder and Arjen Robben are current clients of the elderly medical man. 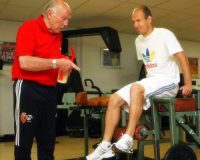 Van der Vaart explains the methods that Van Toorn adopted to get him back playing two weeks after a hamstring strain, when he was expected to be sidelined for a month and a half:

“I go there and after one week, I can run and shoot again. It’s a lot of acupuncture, chiropractic work… and a lot of power training. You have a lot of pain when you have pulled your hamstring, for example, but he is still training, training, training. I always go there for four days and it’s two four-hour sessions per day.”

So there you have it – it’s not all ice baths and the gym when recovering from injury, as footballers look to any and all methods to get them back in action.