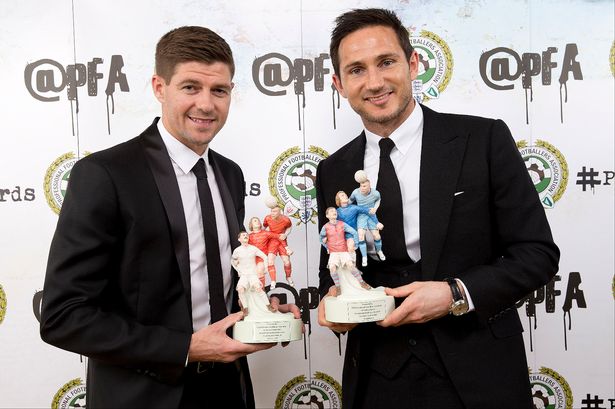 England manager Roy Hodgson stated that he would like to have former England captain as a part of his coaching staff.

Gerrard has worked with the former Liverpool manager on several occasions, with the duo working together for Liverpool as well as England.

Steven Gerrard is set to leave the Premier League this summer and move to the United States, in search of a new adventure. The Liverpool captain signed for LA Galaxy earlier this season and will leave Liverpool after 17 years at his boyhood club.

Hodgson has stated that the likes of Lampard and Gerrard would be valuable additions to the England coaching staff much like Gary Neville. However, the England boss knows that Chelsea and Liverpool will have an advantage when it comes to luring the former England internationals.

“Probably, yes,” Hodgson said when asked if they could form part of the England backroom staff in the future.

“Before that, I’m sure the first people who will try to get hold of them when they return will be Liverpool and Chelsea. I’m pretty sure of that.

“But who’s to say they can’t be members in an English set-up as well?

“They certainly know England. They’ve both had 100 caps. But it’s not only their playing ability. It’s their leadership qualities. They’re both leaders.”

Gerrard has previously spoken about his desire to get into management once he decides to hang up his boots and will be open to the idea, unless Liverpool have a similar role planned for him.

Lampard and Gerrard are both doing their coaching badges and Hodgson reckons they have the ability to be great managers.

“Both of them have the same ability to do that,” he said.

“I wouldn’t want to put a cigarette paper between them in that respect.”

Hodgson also mentioned the immense contribution from Gerrard and Lampard towards English football and stated that he could not imagine a future for England, without the Premier League duo.

“Their effect on English football has been quite incredible,” said Hodgson, who also worked with Gerrard during his ill-fated spell as Liverpool manager.

“But I’d rather speak personally. What they’ve done for me during my time as England manager has been quite fantastic not only on the field as players and in training as players, but also as leaders and characters, they’ve both been outstanding and I want to thank them from the bottom of my heart.

“They’ve been real role models for the rest of the players, they’ve had a natural authority due to the fact they are such good players but they have used their authority in the right way to encourage the younger players to make certain that their strong ethos, which as a coaching staff we share, is spread out amongst all the players.

“I can’t thank them enough for what they’ve done. I really hope they enjoy their American adventures and they will come back even stronger individuals and leaders than they already are.

“We will see an awful lot of benefits going forward with those two players. I can’t imagine a long-term future in English football without major contributions from Gerrard and Lampard.”

It would certainly be interesting to see Gerrard and Lampard become an integral part of the England coaching staff, or for their respective clubs. Apart from their phenomenal experience in football, both individuals will bring world class advice and leadership into the setup and help younger generations achiever their potential.