SquadGod.com a.k.a one of Soccerlens’s advertising partners and also the ultimate fantasy football site, today added a monthly game option to its existing gameplay formats. SquadGod advertises itself as the only fully customisable fantasy football game available, and now lets players and fantasy managers set-up games running in a monthly format, allowing players to field a new team every month.

Monthly games work exactly like standard, season-long games, but at the end of every month your points re-set back to zero, and you get given 11 free transfers to select an entirely new team for the month ahead. Not only is this great for mid-season leagues, and players who got off to bad start to the season, but also it offers website owners, football bloggers and sports related media businesses the opportunity to set-up their own leagues with monthly winners and prizes.

And this is where Soccerlens (SL) comes in. 🙂 As some of our readers already know, SL has set up a SquadGod group (which can be found here), but as a new innovation starting in December (and for the months to come) there will be a £500 cash prize given to the best manager of the month!

To sign up on SquadGod, visit the registration page and don’t forget to also join SquadGod’s Soccerlens group for more chances to win the prizes!

“Now you get a clean slate each month, and end those mid-season blues with your team languishing at the bottom of the league. SquadGod is all about choice and flexibility, and this is another step towards confirming SquadGod’s position as the ultimate site for fantasy football fans worldwide.” 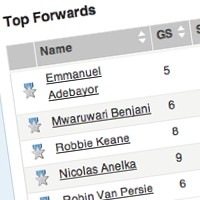 SquadGod was founded by Patrick Hennessey and Harry Parkes; Patrick a derivatives trader and life-long/ long suffering West Ham fan, Harry, a veteran internet entrepreneur, and unabashed Chelsea supporter. Both wanted to get more out of fantasy football, bring the game up to speed with what was possible online, to put fantasy football into the hands of the fans.

SquadGod is the only fantasy game that lets the players create their own game, and offers an ideal platform for brands and advertisers to create and maintain a lasting and credible dialogue with sports fans. SquadGod offers brands a range of sponsorship packages for higher levels of co-branding, design control and inventory management.

Launched at the start of the 07/08 season it’s already proved hugely popular in the fantasy football community with leagues being run by some of the top football blogs and fan sites and more joining every week.