Arsenal have suffered another blow in their attempt to sign highly rated central midfielder William Carvalho, after Portugal club Sporting refused their latest offer, according to reports from A Bola.

According to the report, Arsenal have offered €25 million offer for William Carvalho, but Sporting are refusing to sell their prized asset for anything less than €45m, which is his buy-out clause. 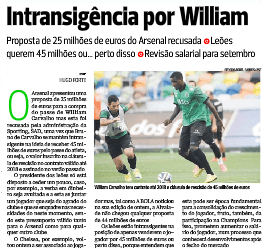 Earlier this month, Portugal newspaper O Jogo claimed that Sporting are willing to do a business around €30m-35m.

The Portugal club owns 60% of the player’s economic rights while rest are owned by Sporting fund. Arsenal were willing to pay that amount in two lots which would leave Sporting with no profit what-so-ever.

The report doesn’t make it clear whether Arsenal have offered €25m direct payment or not. But the report does say that Sporting want him to stay as they want to build their team around him.

Premier League giants Chelsea are also thought to be interested in him, but the Londoners haven’t made any concrete offer, claims the report.