India
Home News so near but yet so far for united 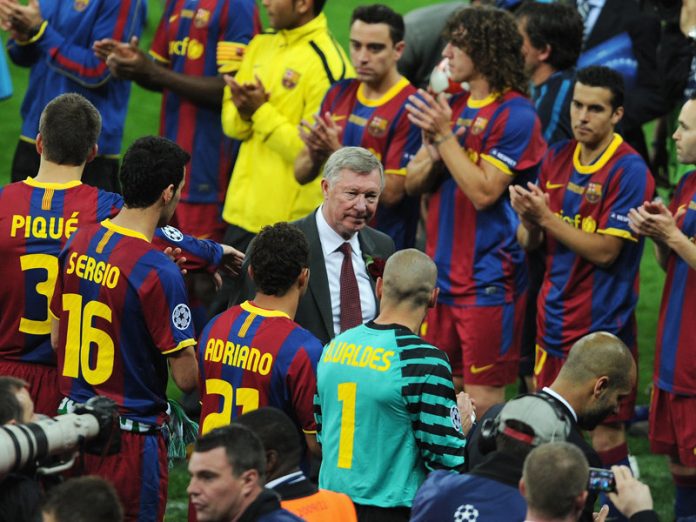 Sometimes you just have to hold your hands up and admit to being second best.It’s not something Sir Alex Ferguson is used to doing but Saturday night was an occasion when the great man had to do just that. Barcelona were just too good for Rooney and co. Simple as that.

Barca pass the ball with a composure and intent which others seek to emulate but are unable to achieve. On Saturday night Barca completed 777 passes, more than double Manchester United’s 357. Xavi, the grand orchestrator of the ensemble, found his teammates with 148 passes and had a pass completion percentage of 95%. Although it’s not just their ability with the ball that is astounding. They press and harry like a pack of hungry wolves, forcing the opposition into mistakes. Then when the ball is in their possession, the attackers interchange roles with a fluidity that leaves opposition defenders punch drunk.

Manchester United could have been at their very best on Saturday and would still have lost. In fact I’d argue that if Ferguson could have named a team consisting of the best players he has coached during his time at Old Trafford he would still have returned home empty handed. Big call I know considering the likes of Ronaldo and Keane have pulled on the red jersey but I believe Barca are that good. They are simply irresistible and unfortunately for United and the rest of Europe’s elite it looks as though their desire for trophies is not going to wane any time soon.

It must be noted that certain Man United players just did not turn up for the big occasion and Dimitar Berbatov literally didn’t. The Bulgarian forward, one of the most technically gifted attackers of his generation, has the ability to enthral yet seems to annoy a significant section of the United support. The Premier League’s joint top goal scorer’s omission from the substitute bench for Michael Owen was the footballing equivalent of a low blow, confirming that Ferguson has lost all faith in his record signing to deliver the goods on the big stage.

Certain United players had a bad day at the office. Having terrorised arguably the world’s best left back Ashley Cole only a couple of weeks ago, Antonio Valencia looked more Wigan than Man United level on Saturday as he clattered around the pitch like a bull chasing the red flag of the Spanish matadors. Moreover, Ryan Giggs seemed as though he had made yet another trip to the Fountain of Youth, only to find it was empty. The 37 year old laboured around Wembley’s hallowed turf, unable to cope with the quick tempo set by the footballing world’s greatest double act, Xavi and Iniesta.

This summer could well be a defining couple of months for the Premier League as the top clubs look to strengthen. United need to improve their midfield options although Ferguson will hope that Anderson begins to fulfil his potential and blossom into one of the world’s best central midfielders. Carrick, a player with a superb range of passing and excellent football brain, unfortunately does not offer enough in the final third and the arrival of a true attacking play maker such as Sneijder or Modric could be the final piece of the jigsaw.

In addition, Ferguson would be wise to look within the inner sanctums of Old Trafford for help as the impressive Paul Pogba and Ravel Morrison seem to have the ability required to make it at the top level, although Morrison’s bad boy lifestyle does himself or the club no favours at all.

United need not smash the panic button as they were beaten on Saturday by a team many consider to be the best ever. This season will still be remembered for years to come by United fans as they managed to eclipse Liverpool’s league trophy haul with number nineteen. It will take every ounce of Ferguson’s nous for United to be lifting title number 20 at the end of next season but the Champion’s League could well be a step too far as the Barcelona era of dominance looks likely to continue for some time yet.