Everyday I open up Google News, and I run my usual searches: Bayern Munich (just so I can get my cousin’s nagging of my back) and of course, Man Utd & Manchester United. I have to run both spellings just in case; we don’t want to miss anything big, like this stroke of genius from the rumor mill?!!However amongst the usual babble about Tevez, Torres and the above-mentioned story about our Viking Gudjohnsen I found an actual piece of professional journalism. Rare as they have become thanks to the likes TribalFootball, this piece actually made its way to the “What the Papers Say” section of ManUtd.com.

Fabio Quagliarella is the lad’s name, he is co-owned by Sampdoria and Udinese and has been tipped as the newest addition to Sir Alex Ferguson’s squad for next season. We’ll figure out how to enunciate his name later, for the moment, what we need to know is this:

First and foremost, Quagliarella, 23 years young, struck a pair of sublime goals from distance to give the Azzurri a 2-0 away win last week in a Euro 2008 qualifying win against Lithuania. He has made 35 league appearances for Sampdoria last season, scoring 13 goals.

One particularly memorable strike came in a game against Chievo at the end of May when he found the back of the net with an audacious hit from 40 yards out. Another came against Reggina, when he converted a textbook scissor kick from a corner, and still managed to land on his feet. It was an incredible demonstration of skill, power and athleticism, and one that forced some of Europe’s footballing giants sit up and take notice. 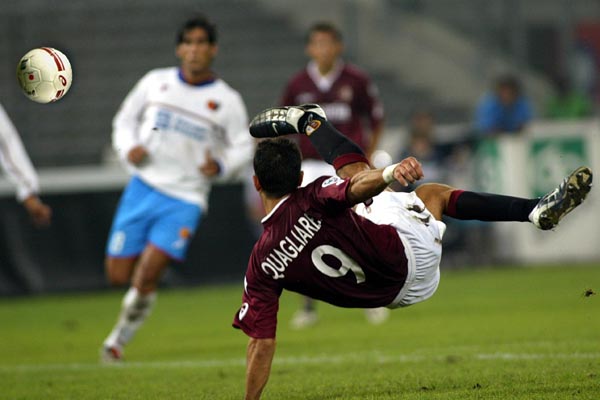 (Not the actual scissor kick from that match, but close enough…)

“In the current market, I would compare him with two other players (Milan striker Alberto) Gilardino who was bought for 24 million euros and (Valencia’s Francesco) Tavano (who is valued at) 12 (…) Therefore the value (of Quagliarella) is 15 to 20 million euros.”

Third, just a few hours ago a story has popped up which has Quagliarella agent, Silvio Pagliari saying the following:

“One month ago Manchester United put in an offer of 10 million pounds (14.8 million euros) for Fabio (…) We feel Fabio is worth between 15 and 20 million euros, so if the English club’s offer still stands, it is highly probable he will go abroad.”

So basically Man Utd are being told to confirm the bid, this is obviously a “come and get me” signal from the player.

Apparently, back in March, it was Martin Ferguson who scouted the player at Sampdoria’s game against Palermo. And in this blog entry from Soccerfiesta dating back to April 8th we have a quote from Beppe Marotta admitting an offer from Manchester United for the striker.

Now, I know I shouldn’t rave about how great this lad might be. I know he is inexperienced and unproven. But the boy’s a bit special you see. Not only does he find the back of the net but he makes sure won’t forget it. His fearless approach to the game reminds me of King Eric and his eye for the spectacular results in unforgettable strikes. 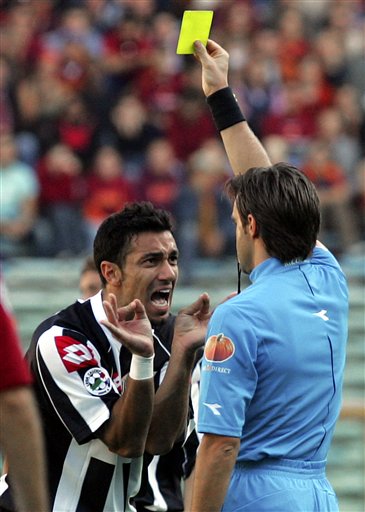 Although at 1.80m he is hardly the tall “fox in the box” goal poacher Man Utd fans have been craving for, he is a definite monster when shooting from outside the box and seems to want to a move to Old Trafford. Perhaps he has dreams of an all Italian striking force at United if he is to be coupled with Rossi. Still, he falls into the category of a Rooney-like player; but again so does Tevez, maybe Sir Alex has a formula in mind as to how he might accommodate such a combination. Let’s just wait and see how this one plays out…

Here is a compilation of his goals for those of you have been intrigued by this lad.