There have been few instances of loss of form as sudden and dramatic as the one involving Cesc Fabregas’. The Spaniard was arguably the best midfielder in the league in the first half of last season. His tally of 15 assists was a runaway table-topper, as Chelsea’s new signing from Barcelona ran riot with his incisive passing and vision. His partnerships with the likes of Diego Costa and Eden Hazard were cornerstones to the Blues’ successes last year, and no one could question Jose Mourinho’s decision to pay over €30 million to secure his services.

But now, we are dealing with a stark contrast. Fabregas’ form has dropped like a stone. He has looked jaded and tired since the turn of the year, and has had a dismal start to the 2015/16 campaign. It is hardly surprising that Chelsea have been overrun in midfield in nearly every game that they have played thus far, with both Fabregas and Nemanja Matic struggling to keep up.

Lack of contribution – the numbers

Statistics don’t lie, and Fabregas’ numbers in 2015 paint a very sorry picture indeed. The likes of Oscar and Branislav Ivanovic have also suffered losses in form, but it has been a gradual process, unlike Fabregas’. The 28 year-old looks lost and clueless, and his contributions going forward have been negligible. 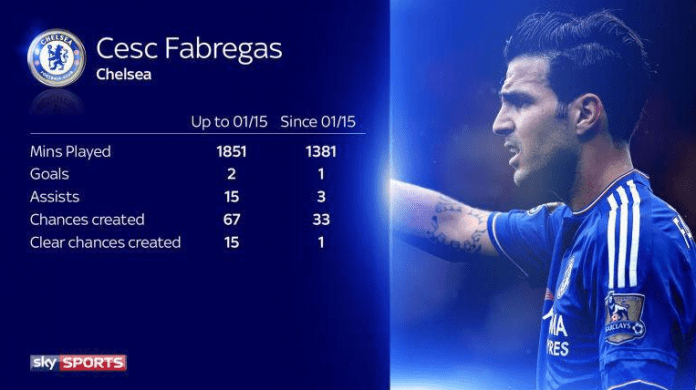 He has become a liability at the other end of the pitch as well. With teams deploying the ploy to man-mark him out of games, he loses possession far too easily when under pressure. His lack of pace has seen build-up play slowed down, and his failure to track back has left wide open spaces for the opposition to exploit.

The following statistic shows how easy midfielders find playing against him, and how easily Chelsea are left exposed due to his shortcomings defensively. It is little wonder that Matic has found it difficult, with Fabregas faring so poorly.

Cesc Fàbregas: No player has been dribbled past more times in the Premier League this season than Fàbregas (9) pic.twitter.com/XtY6YS63eZ

What can Mourinho do?

Mourinho does need to take a long hard look at this situation, and there have been signs recently that some changes may be on the way. Ruben Loftus-Cheek was brought on for Matic in the loss against Crystal Palace last Saturday. The fact that the Englishman replaced a far more experienced player despite Chelsea being a goal down shows how displeased the manager was with his setup. Fabregas lasted the full 90 minutes, but was completely benign.

One option is to drop him for a couple of games. The Spaniard is clearly disoriented and some time on the bench may prove to be a kick up his backside, something that will force him to regroup. There are signs that a few of the Chelsea players are complacent after last season’s comfortable win, and it is upto Mourinho to get them out of this lull.

Another alternative is to reduce some of his defensive responsibilities by playing him slightly further forward. He clearly does not have the legs to cover the entire pitch, and giving him a bit more freedom going forward will only help him contribute better. This would involve, of course, playing someone like Loftus-Cheek, Ramires or John Obi Mikel alongside Matic and dropping Oscar and Willian. Chelsea’s formation would then more or resemble a 4-3-3 formation, with Hazard, Costa and Pedro making the front 3. Fabregas would not be an out-and-out second striker, but would hover in and around the forwards. 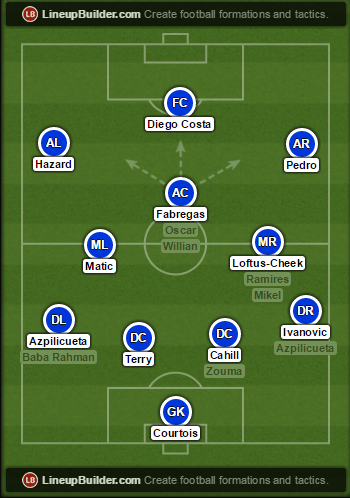 Chelsea’s number 4 still has a big reputation, but the former Arsenal man will know that Mourinho won’t care too much for that if he doesn’t pull his socks up soon. He is the Blues’ main string-puller from midfield, and good performances from him automatically lead to good performances from his team. He needs to shake himself up and regain the form and confidence that made him one of the linchpins in Chelsea’s success story last year, or face the axe.