Serie A Clubs in Europe: A Matter of Mentality 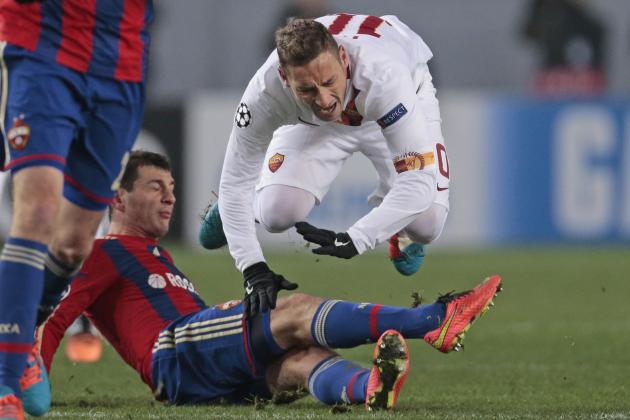 From a corner of the near-empty Arena Khimki, scattered shouts of a few CSKA Moscow supporters echoed around the ground. Leonid Sklutsky bobbed back and forth on the bench in angst, his side less than a minute from falling to Roma at home. Tortured breath exited the lungs of the players on the pitch, forming miniature clouds as it encountered the devastatingly cold air of the Russian capital.

The Romans looked knackered, but on the verge of an important result. In just 30 seconds, they’d have one foot in the Champions League round of 16 if the 1-0 scoreline held. But it wasn’t to be. Just as the three minutes of added time were about to draw to a close, Vassili Berezoutski launched a desperate cross into the Giallorossi penalty area. Nobody could get a head to it. Roma goalkeeper Morgan De Sanctis flapped at it, late moving to his left after looking rooted to the spot. The ball nestled in the back of the net – and the inquisition began as soon as the final blast of the whistle came just moments later.

“Roma frozen: what a mockery!” declared La Gazzetta dello Sport. In the Italian capital, Corriere dello Sport were a bit less less scathing. “What madness!” the headlines read on Wednesday morning. “Now it is up to you,” warned the famous daily.

“It was like getting punched by Mike Tyson,” Francesco Totti told Sky Sport Italia of what had happened. “Because I really didn’t expect that goal right at the end.”

The Roma talisman’s analogy was spot on. The draw represents a hammer blow. Locked on five points with CSKA and Manchester City, the Giallorossi now must go head-to-head with the Premier League champions on the final match day to qualify for the knockouts.

In truth, however, it’s no more than the capital club deserve. The more expansive side in the first half, they retreated deeper and deeper in the penultimate 45 minutes. Rudi Garcia’s men willingly handed the initiative over to CSKA. Amid difficulties keeping possession for any substantial amount of time, they missed two gilt-edged opportunities to kill off the game.

A number of scapegoats for the two points squandered could be named. First, there’s Garcia. It could be said that the Frenchman withdrew his troops from the front lines at 1-0. Meanwhile, bringing on a still-recovering Kevin Strootman for his most energetic midfielder in Radja Nainggolan was a questionable choice.

De Sanctis would also be a popular choice to shoulder the blame. The 37-year-old had no business allowing Berezoutski’s cross to find its way past him. But what about what came just seconds before? Substitute Juan Iturbe is the one who gave the ball away in the first place, while Seydou Keita and Alessandro Florenzi failed to close down Berezoutski.

In the Italian game, everyone loves a scapegoat. In the case of Roma’s entirely avoidable draw at CSKA, there certainly is one. But it’s not Garcia, or any of the aforementioned players. Instead, it’s poor mentality – a pervasive force in contemporary Italian football – that’s to blame.

Over the past few years, it’s been all too easy to lazily explain Serie A’s issues in European football. Sure, money has dried up in the peninsula, a problem that is readily pointed out by most observers. Milan and Inter have dropped off the radar, while a resurgent Juventus in the post-Calciopoli era still aren’t what they once were.

But that can only explain away so much. The fact is that Italian sides can do better than they have in continental play, pockets less swollen and all. Look back at Juventus’ Champions League campaign from last season. The Bianconeri were stagnant, uninspiring. They appeared a shell of the dominant force that took Serie A by storm in record-setting fashion on Tuesdays and Wednesdays – and paid dearly for it.

Galatasaray knocked them out of the Champions League on the final match day of the group stage. The now-notorious encounter was played in two parts, the first in a hailstorm. When the game was resumed, the pitch was in catastrophic condition. Former Inter star Wesley Sneijder bagged the winner for the Turkish outfit, leaving Juventus bitter over the absurd circumstances under which the match was played. Yet the reality remained that both sides were affected and Juventus really had only themselves to blame for their elimination.

This past week, Juventus faced Malmo in Sweden. Talk swirled about the awful state of the pitch at the Swedbank Stadion, compared to what the Bianconeri encountered a year ago in Istanbul. The comparisons were worrying as they suggested Juventus were still mired in the same mind state that led to their crashing out at the hands of Galatasaray – searching for a scapegoat rather than assuming the proper mentality.

After an abject first half display, Juventus did the business with a 2-0 victory on the back of an enthusiastic second half showing. The win was desperately needed. Without it, the Bianconeri would’ve entered the final match day with it all to do – as they did in last year’s edition. The result is thus a refreshing one for Italian football. In a tough spot, an Italian club at last got it right in Europe, something that’s been all too rare of late.

Roma nearly did the same in Russia, but proved their own undoing in the end. Both Garcia and his men lacked the proper nous to take the game by the throat when it was there for the taking. It bears noting that Garcia’s project in the Italian capital is far behind that at Juventus, who are in search of a fourth straight Scudetto after Massimiliano Allegri replaced Antonio Conte over the summer. The Giallorossi have something big in the works at the Stadio Olimpico with a talented squad, yet the letdown at the Khimki Arena shows there’s plenty to learn.

Serie A sides finds themselves in a situation where the mentality of making your own destiny in Europe has slipped away, and it needs to be rediscovered. The future of Italian football in many ways depends on it, rediscovering some of the lost prestige and returning to Europe’s top echelon. Juventus are still mired in the frustrating process of catching up to their Spanish, English and German counterparts. Roma are even further behind. While money to burn helps, European football isn’t just a matter of transfer fees and wage bills. Scapegoats won’t level the playing field for Italian clubs with their Champions League counterparts – it’s the killer instinct that comes along with a winning mentality that will.