Fly, little bird, fly.. high in the Serie A sky. That little bird my friends, is Inter Milan, who thanks to the defeat of Roma at the hands of Juventus, now have an 11-point lead on their 2nd-ranked Giallorossi rivals. In other words, chalk up another Scudetto for the Nerazzurri… what remains is the bid for Champions League qualification, something for which Juventus, authors of an excellent performance at the Stadio Olimpico of Turin, scored big points tonight. Attentive, determined, and eager to get a result on their home stadium, Claudio Ranieri’s men really battled it out on the field, grabbing the lead and managing to conserve it in pure Juventus fashion: by tying down the plays of their opponents and relying on their nº1 keeper Gigi Buffon. The Scudetto race may well be over, but the 2nd spot is all up for grabs now.
.

But speaking of Champions League, it would be perhaps fair to say that the Roma team which stepped on the field tonight, suffered a bit from “cup syndrome” as Gazzetta dello Sport dubbed it. Nervously anticipating their difficult match against Real Madrid on Tuesday, the Giallorossi were unable to concentrate fully on the task at hand, and perhaps allowed their Juventus opponents a few too many liberties. However if one looks at week-end results in other European leagues, the CL rivals of Serie A teams (Arsenal, Liverpool, and Real Madrid) all lost on Saturday, some of which in astonishing fashion (the FA Cup 4-0 trashing of Arsenal at the hands of Manchester United comes to mind). I guess the “cup syndrome” isn’t an isolated phenomenon, but that’s an observation which, I’m afraid, will provide very little consolation to Roma. 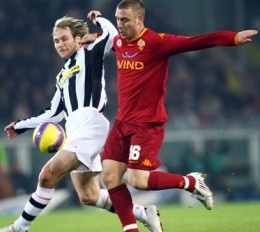 Tactically, following much talk taking place the week preceding the game, Claudio Ranieri eventually decided to field his 3-striker formation, or rather, present David Trezeguet and Vincenzo Iaquinta as the main two Juve forwards, supported by Alessandro Del Piero in a nº10 playmaking role. A very offensive formation therefore, also confirmed by the Bianconeri midfield with Cristiano Zanetti as the lone central ‘interdictor’, and Camoranesi/Nedved with a strong inclination for wing attacks.

On the other end, Roma coach Luciano Spalletti preferred Marco Cassetti and Matteo Ferrari for Cicinho and Christian Panucci, probably following a rotation policy in light of the upcoming Champions League commitment. By the same token, Mirko Vucinic’s name did not even appear on the gamesheet, the goalscoring duties being left to Captain Francesco Totti, supported by the De Rossi-Pizarro-Taddei-Perrotta-Mançini midfield group. 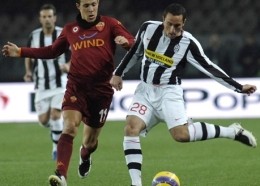 The first 45 minutes of this match went by as a fairly balanced contention between the two teams, with Juventus perhaps being a bit more daring (on account of their heavily offensive formation). Not by much mind you, the game was effectively, for long stretches of the first half, played out as a tactical mindgame between the two managers, observing, making little changes in their formation, poking at their opponent. Juve’s Molinaro and Zebina were trying to offer their help on the wings (since Nedved and Camoranesi were essentially playing as center mids), but the accuracy of their crosses left a bit to be desired.

As for Roma, they were letting Juve play out their game, ready to hit them back on the counter-attack. Such as on minute 17, when a low shot by Mancini got deflected by Totti (almost in fortuitous manner) sending Buffon the wrong way. Fortunately for Juve, Molinaro was there to clear the danger.

Starting from minute 39 however, things really started to pick up in this match: from the right wing, a David Trezeguet cross was picked up by Iaquinta in the center, executing a spectacular mid-height volley on which Roma keeper Doni really had to stretch to save his team. That chance was however the prelude to the Bianconeri goal, shortly before the end of the half. Stemming from a David Pizarro lost ball in midfield, Nedved found himself into space on the counter-attack, and forced Philippe Mexès to take him down on the edge of the Roma box. 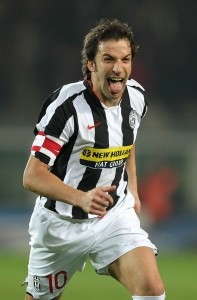 Very good position for a Juve free-kick, especially for main man Alessandro Del Piero: on what seemed a rehearsed set-piece scheme fresh from the Bianconeri training ground, the Juve captain executed a hard shot onto the 2nd post, aiming at Iaquinta inside the wall (ready to duck and cover to let the ball fly by). Doni was left helpless. 1-0 Juve, and goal nº230 with the Bianconeri shirt for ‘Pinturicchio’.

Now while the match lead arrived in the late minute 45, there was still enough time left for the almost-Roma equalizer: on a Simone Perrotta cross from the right, Nicola Legrottaglie tried to anticipated Totti for the winning tap-in, and actually ended up deflecting the ball… onto the post, with Buffon helpless! Close shave for Juve, but their 1-0 scoreline was safe at the break.

At the restart, Juventus had to continue their match without Camoranesi (struggling with yet another muscular problem) which prompted the insertion of Antonio Nocerino. Along with the late arrival of Momo Sissoko in minute 68, this gave a lot more stability to a suffering Bianconeri midfield and allowed Ranieri’s side to contain Roma’s offensive verve, as the Giallorossi were pushing for an equalizer. Juve struggled for a good 15 minutes midway through the half, but only really risked their feathers on a Philippe Mexès header in the 60th (wide), and a Daniele De Rossi free-kick howitzer from long range in the 77th (great save by Buffon).

At the end of the 90 minutes, Roma simply had not done enough to obtain a goal at the Turin Olimpico tonight. For their sake, one can only hope that the other Olimpico (in Rome) will reserve a better fate to the Giallorossi on Tuesday, when they resume their Champions League adventure vs. Real Madrid. 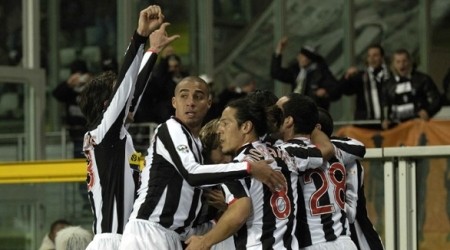