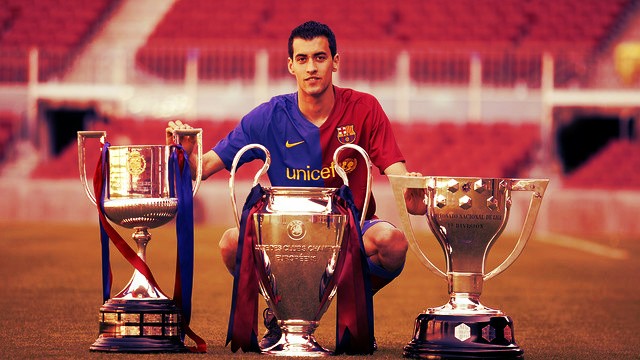 Arsene Wenger is interested in Barcelona defensive midfielder and Spanish international, Sergio Busquets. Busquets has been identified by Wenger as Arsenal’s marquee target this year, after signing the likes of Alexis Sanchez and Mesut Ozil from Barcelona and Real Madrid previously.

Wenger has decided to return to Spain once again, this time for Sergio Busquets. The player has admitted his desire to play in the Premier League at some point in his career and it seems Arsenal are ready to grant Busquets his wish.

Arsene Wenger believes that youngster Coquelin has done a magnificient job as a defensive midfielder towards the end of last season, but the side needs an upgrade if they are to bridge the gap between Arsenal and the European elite.

Sergio Busquets is arguably the best defensive midfielder in the world and has won every trophy as a footballer, both in the club level with Barcelona and internationally with Spain.

Arsene Wenger knows the signing of Sergio Busquets is not easy and has asked the club to spend huge money in order to convince Barcelona.

Earlier this summer, Lord Harris, director at Arsenal, claimed that the club can spend up to 200 million pounds this summer, if Arsene Wenger can find the right player, who can take Arsenal to the next level.

Arsenal have been linked with defensive midfielders this summer, but their initial targets Morgan Schneiderlin from Southampton, ended up at Manchester United and Juventus midfielder Arturo Vidal completed a move to Bayern Munich today.

It seems Wenger is keen to add some defensive protection to his midfield this summer and is desperate to get the best player out there.