Arsenal are seemingly interested in signing Barcelona’s young midfielder Sergi Samper but the Catalan giants won’t make it easy for the Gunners.

Mundo Deportivo has devoted as many as three pages including the front page on Arsenal’s interest in Samper, where they claim Arsene Wenger is making a strong effort in signing the 20-year-old midfielder, who has somehow grown frustrated at Barcelona due to lack of opportunities.

Barcelona are choc-a-bloc with talented midfielders and forwards in their ranks and at this moment it is really difficult for any young players to get into the first team squad and start playing on a regular basis. Sergi has been informed by the club that he won’t be a part of the first team next year at Barca. 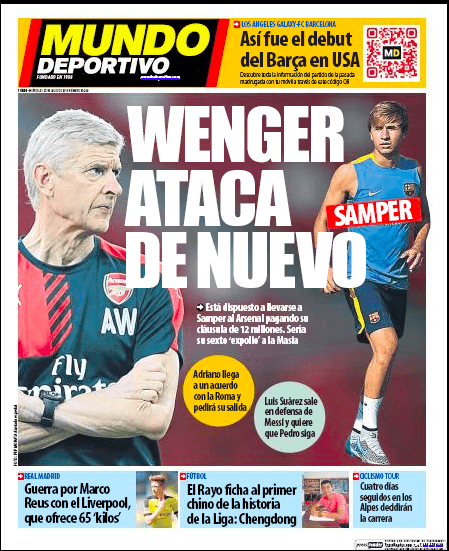 Samper has a reported release clause of €12m and Arsenal are willing to pay that amount. Sergi, currently training with the Barcelona squad in US, should respond to interest from Arsenal in the coming days. 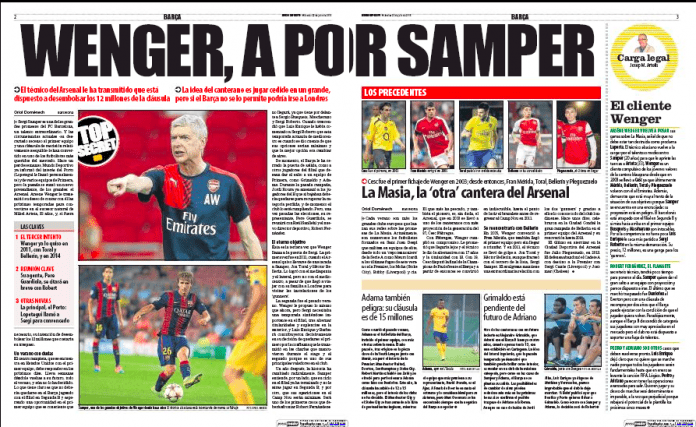 It’s the third time Wenger has made a move for Samper. In 2011, when Wenger signed Toral & Bellerin, he showed an interest in signing Samper as well. The Spaniard even visited the Arsenal training facilities with his family but he later turned down the chances of joining the Gunners.

So far, no bid has been received from Arsenal. The Gunners have shown an interest and information are being relayed via agents. Wenger has informed Sergi’s agent that he’d be willing to pay his release clause. Now it’s up to the player to decide if wants the move or not. If yes, Arsenal will match his release clause.