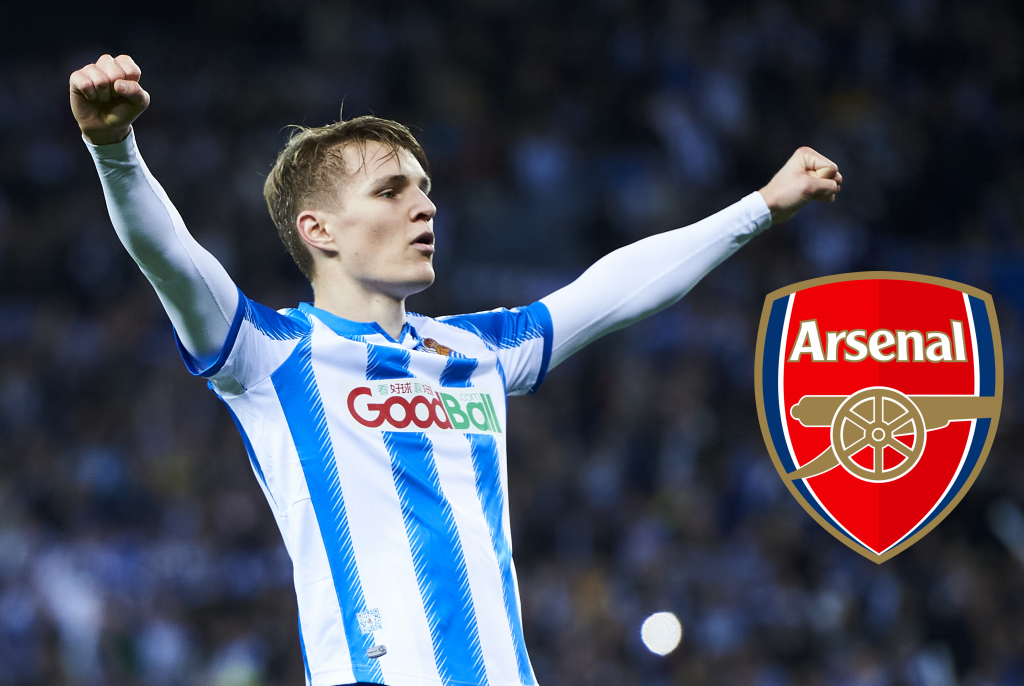 Martin Ødegaard has joined Arsenal on a straightforward loan until the end of 2020/21 season after a disappointing return to Real Madrid following a year at Real Sociedad.

He has made only nine appearances and five starts for Los Blancos this season, failing to contribute to a goal in any way. Clearly, he needs some regular game-time, and Arsenal need a playmaker, so this seems to be a match made in heaven.

The 22-year-old midfielder grew up playing football in his homeland, Norway. After spending four years under the tutelage of his father at Drammen Strong, a local sports club, Ødegaard joined the youth academy of top-tier club Strømsgodset.

He spent five more years in the youth divisions there, garnering attention and accolades from all over the country and beyond. He started training with the first team when he was just 13, subsequently visiting Bayern Munich and Manchester United for training camps.

Aged 15, Ødegaard made his senior debut. Soon, he scored his first senior goal and even travelled on a European expedition for a Champions League qualifying round match. In December 2014, he visited Liverpool, Bayern and Arsenal on further training camps, but he would join Madrid a month later. He had some difficulties in even settling with the reserves, but due to an injury crisis in the senior team, he made his debut in May 2015.

After spending a couple of years mostly with the reserves, Ødegaard was loaned out to the Netherlands for two seasons, first to Heerenveen and then Vitesse Arnhem. Thereafter, he spent a season with Real Sociedad, where he impressed so much that Real recalled him to their senior squad at the end of 2019/20. However, as aforementioned, he hasn’t been able to get a lot of game-time this season, so a loan move seems to be the best option for him.

Arsenal have seemingly sealed his signature ahead of Sociedad, so let’s take a look at what he can bring to the club in this scout report.

Ødegaard started as a right-winger, but has slowly evolved into a more traditional number 10 and can even play as an 8 in midfield. The fact that he started playing professional football at the age of 15 says all you need to know about his talent – he is exceptionally technically gifted. He is brilliant with the ball at his feet, and his speed of thought usually leaves opponents behind. David Silva, his replacement at Real Sociedad, can very much be compared to the Norwegian international.

An attack-minded midfielder very much in the modern mould. Diminutive, quick-footed, with natural balance, pace and, perhaps surprisingly for one so young, excellent shooting power

Comparisons to David Silva are not loosely done, so Ødegaard is undoubtedly a man of many strengths. Creativity, of course, is one of his specialities. Last season, he got six assists, completed two key passes and 3.22 shot-creating actions per match on average in La Liga. In his time at Vitesse, that went up to 3.5 key passes with 12 assists. He is pretty handy during dead-ball situations too – that’s how 32.93% of his key passes in 2019/20 came about.

Dribbling is another one of Ødegaard’s strengths. Last season, he averaged 7.58 progressive carries per match while completing 67.02% of his dribbles. He was also only dispossessed 1.2 times per match on average.

What might please Mikel Arteta the most, though, is Ødegaard’s work-rate without the ball. The lack of this was one of the reasons given for Mesut Özil’s fall out of favour, so Ødegaard could prove to be a harder-working Özil for Arsenal. Last season, he averaged 14.36 pressures per match.

Ødegaard’s creative genius comes into play only after he receives the ball in dangerous areas, which is why his smart positioning is another important part of his game.

Here is an example of Ødegaard’s great positioning from Real Sociedad’s clash against Deportivo Alavés. He drifts into a pocket of space between the opposition lines to receive the ball, identifying an exploitable opening.

After sending an opponent to the shadow realm by cheekily nutmegging him, Ødegaard looks up, sees Mikel Oyarzabal on the far side and sets him up with a sensationally accurate through pass. David Silva would be proud if he did that.

Here is the best of Ødegaard’s action for Sociedad, featuring some silky skills, outstanding assists and fantastic free-kicks.

Ødegaard is not bad at too much, after all, he was arguably the best midfielder in La Liga last season. If there is anything he is not very good at, it is aerial duels. Last season, he only won 0.3 per match, so he shouldn’t be useful when defending set-pieces.

Many will question his failure to break into the Real Madrid eleven this season and perhaps imply that he still is a bit rough around the edges, but his season at Sociedad clearly proved that all he needs is regular game-time to compete with the best of the best. So, the Norwegian playmaker might take a while to settle at Arsenal but, once he does, he will very hard to stop.

As aforementioned, Ødegaard can play on the right wing or as a number 8, but his favoured role is that of a number 10. Arsenal have used a variety of systems this season, starting with a 3-4-3 which transitioned into a sort of a 4-2-1-2 in possession and recently moving to a more conventional 4-2-3-1. Their newest playmaker could fit in either system: 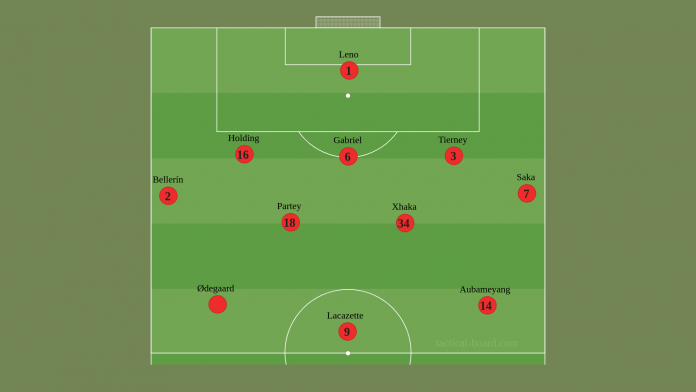 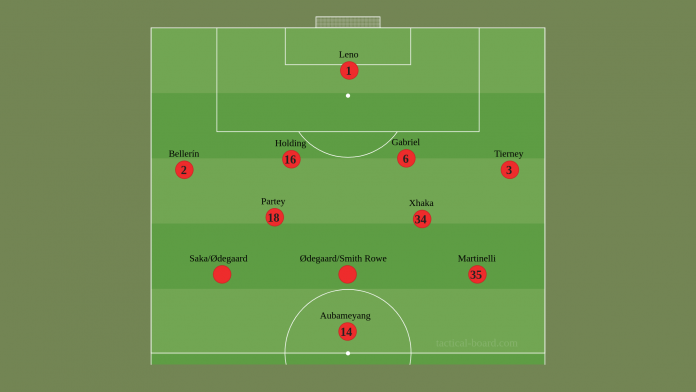 Since Arsenal have been using the 4-2-3-1 of late, it is easy to assume that Ødegaard will most probably be competing with Emile Smith Rowe for a starting position, but could also play on the right as discussed previously. However, that would put him slightly out of position, so if Arsenal wish to accommodate both of their creative talents, a 4-3-3 might be their best bet. Arteta has tried this a couple of times outside the Premier League, so here is how that would look with Ødegaard in the side: 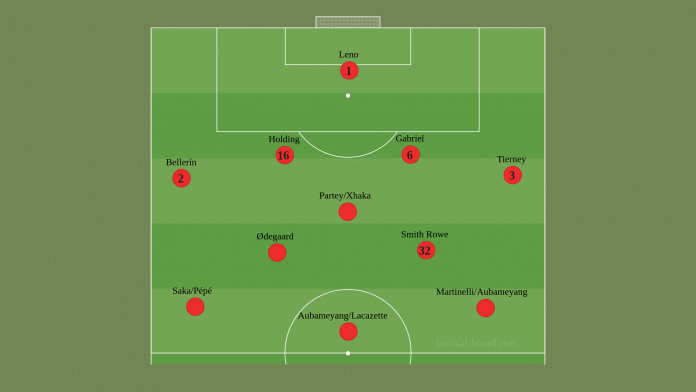 In any case, Ødegaard would have to shoulder the bulk of the creative responsibility. Further, he would probably be tasked with set-pieces too since the Gunners clearly lack an expert – David Luiz is often used to hoofing the ball into Row Z, while Nicolas Pépé (whenever he is on the pitch) provides a good alternative to work the ball boys.

Ødegaard’s activity map from 2019/20 clearly indicates that he doesn’t mind operating on the right of midfield, so it will be fascinating to see if Arteta does field a 4-3-3 with him.

In short, Ødegaard has to do what Özil used to do during his heyday in London.

Saying this feels a bit weird, but Arsenal are actually doing some excellent business. Emile Smith Rowe has been a great number 10 for them in the short spell he has enjoyed in the senior setup, but there is no doubt that he could use some competition to develop, so a loan deal for one of the most exciting playmakers in world football is certainly not bad.

Those who have watched him do his thing will tell you this – Ødegaard will be a fine addition to the Premier League’s collection of creators.