On their last home game, Arsenal fans chanted Bacary Sagna’s name, requesting the French defender to sign a new contract and stay at the club. Arsene Wenger hopes that plea from the fans’ might force Sagna to change his mind.

The 31-year-old defender will be out of contract at the end of the season and can join any clubs in the world on a free transfer. The right-back has been ever present for the Gunners this season and demands a justified pay hike.

However, Arsenal have an internal policy of dealing with contracts for players over the age of 30, and L’Equipe says Arsenal have offered a 3-year-contract extension, worth €50k per week, which is far below from the amount Chelsea and Manchester City can offer.

Turkish giants Galatasaray are also thought to be interested to sign him, but Sagna wants to continue his career in England, and would chose between Chelsea and Manchester City next season. 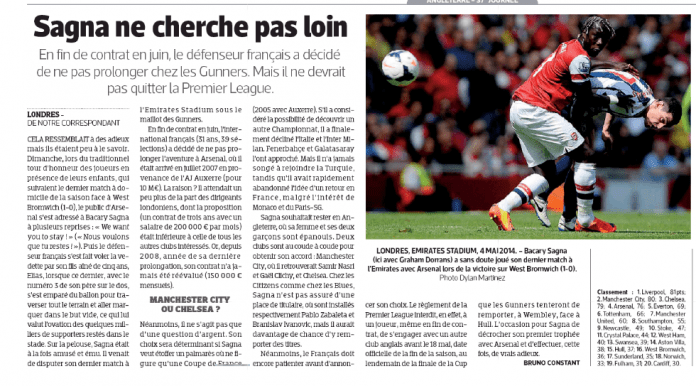 Well, he has been a loyal servant for the club and no one can question over his commitment. He has every right to chose a club that can match his wage demands. And as it stands Arsenal are not willing to increase his salary, which means Sagna’s future at the club is almost as good as over.