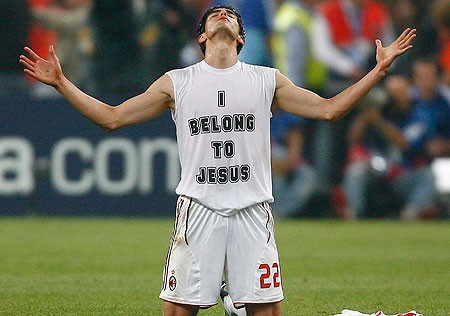 The first rule of play making is that team chemistry must be there. It is also the most important – a team doesn’t work then how is a play maker supposed to make dictate a game, spread the play, get the attacking players into advantageous positions or make game winning passes? It simply becomes harder the less the team are together.

Luckily if the team is in good shape the other rules are easier to follow. So following on from my previous article on the subject, we’ll look at other great passes of the play maker – how the runs are spotted, how the play maker thinks and how his pass ultimately succeeds. Now lets us observe closer the cog that runs great teams.

The Strike Run – It’s Not About Finding The Player

Strange but true. When for example Kaka plays Crespo through to score in some crap game in 2005, he isn’t looking for the player. When Alonso plays through Luis Garcia through for the opener against Sunderland in the 05-06 season, he wasn’t even looking where he was playing it, which while ridiculous, also tells us a little about how play makers can work, more on that later.

In both cases the play maker in question was bang on the money with a sensational through ball that resulted in Crespo formerly and Garcia latterly gobbling up the opportunities presented. In both cases the balls weren’t so much played to the striker’s feet for them to do the work as Kaka and Alonso playing fetch, with Crespo and Garcia the slobbering dogs. This is pretty obvious stuff to be fair – the basic premise of a through pass is to play the ball behind the defence for an attacker to run onto, but what it also helps do is define how a play maker thinks.

explaining, because it’s no fluke. In most cases it’s a ball just not worth trying, but Alonso obviously knows his football pitch. This was Liverpool at close to their best under Benitez in 05-06, and Alonso knew that Garcia would be cutting inside of one of the central defenders, and he knows roughly where the central defenders will be.

Therefore Alonso isn’t so much hitting and hoping as he is taking a gamble that his spectacular reverse pass out of the blue will catch the defenders off guard and hit just the right spot between them. Again going back to the obvious, Alonso tries to fire the ball into the best position on the pitch for Garcia to pick the ball up rather then making Garcia do the work.

Youtube’s compilations of great assists are littered with passes like this – pieces of perfection that bisect the defence and send an attacker through that in fact simply (and I use the word loosely) use the big track of space behind a high line to it’s most devastating effect.

For instance, this little diagram of the goal Kaka made in the champions league final shows us the type of space strikers want to be played into – space directly in front of the goal with the keeper horribly exposed. Therefore, Kaka in this case wants to find Crespo moving in on goal, so passing into space number 1 on the diagram above isn’t going to work since Crespo would have to beat two defenders.

At the same time playing the ball too far ahead of Crespo such as into the number 2 space and Crespo won’t even touch the ball, since Dudek would have his mits all over it unless one of those horrifying errors sneaks up on him again. Playing the ball into space number 3? A slower ball into that area would be food and drink for Carragher and Hypia, those kittens Milan played with for the first half of that game in the Ataturk stadium.

So we then look to the space in between 3 and 2, an area the defenders would have to strain to defend, but even that area is complicated. Play the ball too much to the right (4) and Carragher may well have an easier time reaching the ball ahead of Crespo, who would be further away from the ball then he would like. Too far to the left, and Hypia might make it harder. In both cases, Crespo might have a harder time of the shot, might have to readjust from his run to his finishing move.

The ball Kaka plays is perfect, even more so then the crappy line I’ve drawn to demonstrate it. It is an absolute golden gift wrapped opportunity for Crespo, who accepted it with aplomb. And it demonstrates perfectly that playmakers aren’t there to find fellow teammates with the ball, they are there to make their teammates find goalscoring opportunities.

At the same time all of the play makers in these cases are not looking to the player but the space beyond.The space that the team chemistry should allow him to decipher in time to find the strikers run. Because if the play maker is always trying to simply find the player, then the opposition players can read you, intercept passes, render your play maker abilities on the ball largely pointless. And there we are, straight back to the first rule. Chemistry is always, always vital. Yes. I have mentioned that before haven’t I…

Still, some assists are just that extra bit of extraordinary, aren’t they Guti? In the next article, I’ll try and explain how he managed this corker of an assist. Wish me luck.