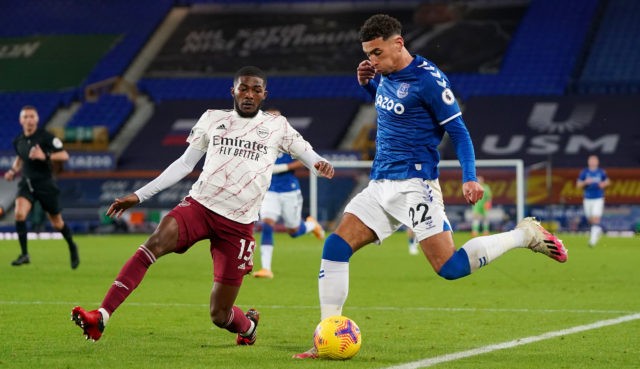 Everton have moved to fourth in the Premier League table following their 2-1 win against Arsenal at Goodison Park last weekend. After a slump in form, the Toffees have now picked up three wins in a row, beating the likes of Chelsea, Leicester City and Arsenal.

Ferdinand feels that Everton’s resurgence is down to their solid foundation at the back. With Lucas Digne and Seamus Coleman injured, Carlo Ancelotti was forced to use the likes of Mason Holgate and Godfrey at the back, and it clicked for them.

Godfrey, who joined the Toffees during the summer transfer window for a reported fee of £25m from Norwich, has excelled in recent games. Ferdinand has hailed him as ‘outstanding’ and has claimed that he kept £72m-rated Arsenal forward Nicholas Pepe in his pocket throughout the game.

“You’ve got two centre-backs playing at full-backs. Ben Godfrey has been absolutely outstanding. The pace he has shown in the last couple of games…were against Timo Werner, Chelsea, the last game against Arsenal,” said Ferdinand on his Youtube channel.

“You look at the pace of the kid. Pepe, £72m worth, I am sure Mr Godfrey would be looking at his pocket and thinking ‘where is he? Someone causing me a bit of friction in my pocket.”

Ferdinand is absolutely spot on. Godfrey was outstanding against the Gunners. In fact, the likes of Holgate, Michael Keane and Yerry Mina all stepped up and the system seems to have worked in their favour.

It now remains to be seen whether Everton can sustain this momentum and cement their position in the top four. It won’t be easy, but they are in full confidence at the moment.

Everton will face Manchester United next in the EFL Cup. They return to Premier League action on the Boxing day when they face bottom-placed Sheffield United.