Whether he becomes their permanent boss has yet to be seen, but Newcastle United’s interim manager Joe Kinnear is certainly not going to go quietly.

In no uncertain terms, the former Wimbledon chief gave referee Martin Atkinson the full benefit of his opinion as he felt Toon defender Claudio Cacapa had been fouled immediately before Fulham were awarded their winning penalty.

Blackburn Rovers can be thankful for small mercies. Despite a comprehensive defeat to Chelsea at a rain-soaked Ewood Park, it could have been a whole lot worse for Paul Ince’s team.

As early as the fifth minute, Rovers should have been down to ten-men as keeper Paul Robinson would have been sent-off had the in-form visitors been awarded a valid penalty after Blues striker Nicolas Anelka stumbled then fell under a determined challenge from the England goalie.

The game of the weekend, if not the season, was at the Emirates where Arsenal and Manchester United battled out a thrilling contest.

It was the under-pressure Gunners who came out on top and their winning margin should have been more comfortable.

At 2-0 in the second-half, they had valid claims for a penalty when Nemanja Vidic pulled back Samir Nasri. 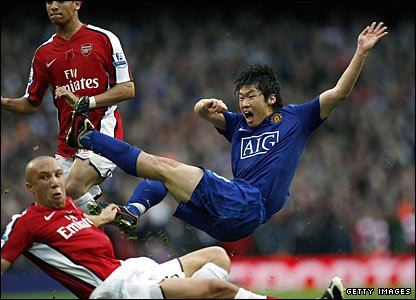