Wayne Rooney’s resurgent goalscoring form in 2011 and his increasingly central role in Manchester United’s build-up play means that he is the key man for the Red Devils in the Champions League final at Wembley.

Although Rooney had struggled with injury and off-pitch troubles in the first half of the season, he has gradually proved himself again on the pitch and since the new year has made significant improvements in his performances in a Manchester United shirt.

It’s still far away from his best season ever in 09/10, but the upside of 2011’s Wayne Rooney is that since he’s not the only person responsible for United’s success, he’s able to play with more freedom and rotating the responsibility on the pitch keeps Manchester United’s attacking play fresh and unpredictable – and given Barcelona’s powers of possession, United will need to be at their creative best to get past Pique and Puyol.

Wayne Rooney in Champions League and Premier League in 2010/11

After scoring just twice between August and December 2010 in the league and Champions League (both from the penalty spot), Rooney has found the net 12 times so far in 2011, scoring a goal every 162 minutes, compared to just one every 493 minutes in 2010, as his conversion rate and shooting accuracy in front of goal have increased dramatically.

Interestingly the frequency of the assists he has made has also changed, as well as his passing accuracy in 2011. Whereas before the New Year he was averaging an assist every 164 minutes, in 2011 this has gone down to one every 278 minutes, while his passing accuracy has decreased from 81% to 77%.

This reflects a change in his role for Manchester United, which is now more focused on being a striker as opposed to a deep-lying forward, with more of his play coming through the centre of the pitch and in the box as opposed to the wings, something that is shown in the touch graphics below. 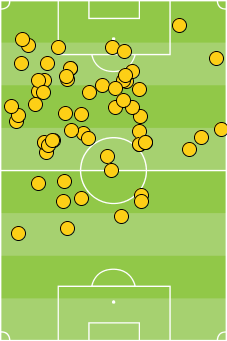 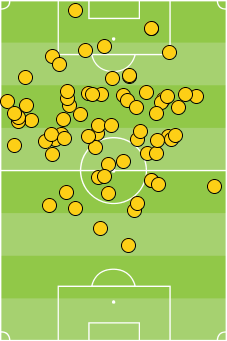