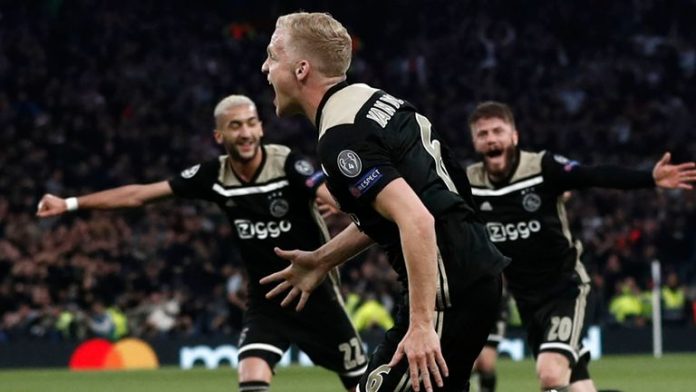 According to The Times, Arsenal are looking to beat Tottenham Hotspur to the signature of Ajax midfielder Donny van de Beek this summer.

Spurs want to bolster their squad after failing to do so in the last two transfer windows, and they have identified the Netherlands international as one of their targets ahead of next season.

Gunners boss Unai Emery is also keen on van de Beek as he looks to strengthen his squad after watching them fall to a 4-1 defeat at the hands of Chelsea in the Europa League final on Wednesday, but the Ajax star has been rumoured to be heading to Spurs for £45 million.

The 22-year-old, who has 20 goals in 94 league appearances for the Eredivisie giants, was one of their best players during a successful domestic campaign.

Van de Beek also impressed as Ajax reached the Champions League semifinals, and will no doubt desire to move to a bigger side.

However, Arsenal’s lack of Champions League football means their chances of landing the midfielder are slim, and Spurs will be in prime position should they win the final at Liverpool’s expense tomorrow.

The in-demand star scored 16 goals and assisted 12 others in 49 games in 2018-19, and more suitors will definitely enter the race to land him alongside Arsenal and Tottenham.