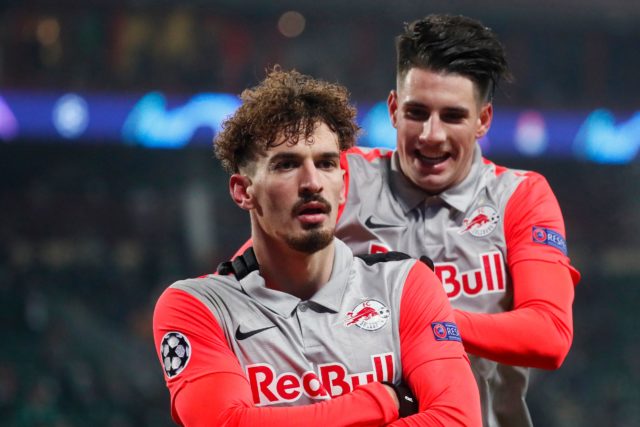 According to The Athletic’s David Ornstein, a host of clubs including Arsenal and Tottenham Hotspur are interested in signing Dominik Szoboszlai.

The January transfer window is now less than a month away, and Arsenal could be heavily busy as they desperately need a few good signings. Mikel Arteta’s side have underperformed this season, with Sunday’s defeat against derby rivals Tottenham Hotspur meaning they have had the worst start to a Premier League campaign in the club’s history.

The Gunners are looking to add quality in their attacking ranks, and have been linked with a host of players, including Dominik Szoboszlai.

The prodigiously gifted Red Bull Salzburg playmaker is taking giant strides towards establishing himself as one of the most exciting youngsters in world football, and several clubs, including Arsenal, are vying for his signature.

Ornstein is a very reliable journalist, and he has an inside update about his release clause. He claims that the player’s future is expected to be resolved shortly, with the attacking midfielder tipped to leave the Austrian club.

RB Leipzig are leading the race for his signature, but European heavyweights Real Madrid, Atletico Madrid, and AC Milan are also in the hunt. In England, it’s a straight-up battle between the two north London clubs – one that Arteta would love to win off the pitch.

The curious aspect of his contract is this: it has a €25 million release clause. It may look like a bargain, but that’s only one half of the story.

I better copy-paste the part from The Athletic:

“Contrary to suggestions that the fee can be financed by way of instalments, it is actually understood to require full payment in one go and within two weeks of the clause being triggered.

There is then thought to be a 20 per cent sell-on mechanism which, unusually, applies to the entire fee of a future transfer and not just the profit. So, for example, if he arrives for €25 million and leaves for €100 million, Salzburg get 20 per cent of €100 million rather than 20 per cent of the €75 million difference.”

Therefore, Szoboszlai must give notice to the club by December 15 that he wishes to leave, while bids must be lodged by December 31, which means Spurs and Arsenal have the next 24 days to secure their target.

The stats will speak for itself – 25 goals in 79 appearances, including four goals in 10 Bundesliga games this season. Furthermore, with five assists, he gives the impression of being a special talent.

He is a fantastic dribbler, loves to nutmeg, has the ability to play out accurate long passes and at the same time find players through the tiniest of gaps, good at set-pieces (esp freekicks), loves to hit from distance, and is a terrific crosser of the ball – these are some of the attributes that instantly catch your eyes.

I am not too sure whether he is the one Spurs need at the moment. He would be a quality addition but would struggle to get into the current set-up. Jose Mourinho has a wealth of attacking midfielders at his disposal, and as such players like Dele Alli and Lucas Moura are struggling to get regular games.

At Arsenal, he could be a natural heir to Mesut Ozil whose future seemingly lies away from the Emirates. He’s an exciting prospect, who would be available at a bargain price, but potential suitors need to hurry.