Before Christmas, the media here in England was whipping itself up into a froth over what has become known as Manchester United’s “Rape Party” – a private-ish holiday bash for which players paid a planner to “harvest” cute girls from the city’s shops, sidewalks, and bars.

WAGS were left at home as the guys (a few pictured here, ripped from The Sun‘s website) went from a strip club (where they could never have behaved as they would later on), to a bar, to a hotel they’d rented out for the night (see standard tabloid story by The Mirror). Newspapers here recited tales of players groping and molesting their guests, and settled on their favorite story – of a woman who was “roasted” by six players, who left her with the compliment that she was “a great shag.” 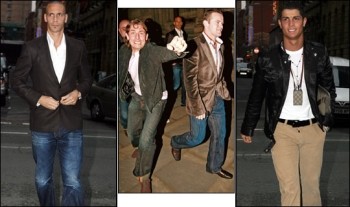 The night took a predictable turn when a rape was reported to the police – and here, of course, the story gets murky: a 26 year-old model reported having been raped by a 19 year-old player (who was “quizzed” by police and released). The truthfulness of her complaint is now, again predictably, in dispute. Rumors abound that her boyfriend had been thrown out of the party, and was the person who phoned the police. The scandal has died down: Man U won its games following this event, seems in form as a team, and that’s that. Few seemed genuinely bothered by the fact that money which flows to the team from fans is being used to fund the worst impulses of a bunch of spoiled assholes who can’t imagine bonding with each other unless it is via and through the body of some woman they’ve “used” together.

Sir Alex Ferguson has said very little – word is he’s banned parties, but the party line is that it’s a “club matter”. 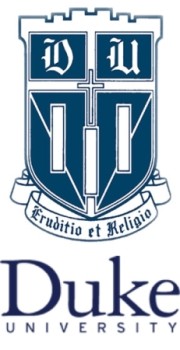 Americans will recognize the harmony between this event and the party thrown by Duke University Lacrosse players last year and the ensuing fiasco as the local authorities and university used this event to exorcise themselves of past demons. The call to the cops was in that instance placed by a stripper who had been hired to perform. The charges from that case were eventually dismissed – but not before her complaint surfaced the obscene racism and sexism of the culture of that team and that campus. At the very least, those young men managed to transform bad judgement (in throwing a wild party and hiring strippers, etc.) into an intensely abusive and creepy display of entitlement.

This story looks only slightly less complex, but even more offensive. Duke, as far from perfect as it is, is not an unreflective embodiment of patriarchy in and of itself – Duke has as many women students as men, anti-discrimination policies in hiring, and was recently led by a woman president. Racism and sexism thrive within its walls, but the extreme versions of those attitudes manifested by players on that team do not represent the institution’s public face, or even its present mission. Manchester United, on the other hand, is a men’s organization – with some under 16 coaching as window dressing. The story of this party has been swallowed up by indifference to the ways that it reminds us of just what a patriarchal culture looks like.

As scandalous as it is to admit, I can understand why someone might make a false rape accusation. Most of the people attending that party have little opportunity to consider what feels exploitative, abusive, disempowering and why – and what avenues are available to them to protest and resist the behavior, and the attitudes that behavior manifests. What avenue is there really for anyone at a party like that to complain? To register their sense of outrage? Someone had a right to protest – and why not one of the women’s boyfriends? Frankly, that’s the kind of man I wouldn’t mind having as a friend. That party had all the hallmarks of the kind of thing at which people are victimized – at which, at the very least, a woman’s consent is used an excuse for the abuse of power.

I would like to imagine a football club whose culture produces both fiercely competitve athletes, and compassionate people. The two can and do go together. But to get from here to there would take a fair amount of self-examination – some real work.
.

From Ladies Teams to Xmas Parties: a Manchester Continuum

Now, here’s my cross: I think the disaster of that party is on a continuum with the events that led to Manchester United’s abandonment of its women’s team (2005’s squad is pictured left). Yes, you read me right: There is no Manchester United women’s team. Manchester City (pictured right) however, does have one (the Man City ladies), and seems most proud of the fact!

Man U ladies were disbanded by the organization in 2005. The disbanded team played most of its life outside the organization’s umbrella – they formed in 1979 as “Manchester United Supporters Club Ladies” – this group eventually became founding members of the North West Women’s Regional Football League in 1989, and enjoyed increasingly competitive seasons at varying levels until they were brought into Man U, which had been running schools for girls through its community development programs. Some of the players in the disbanded team had come up through this system. Man U is required by law to offer training for girls in order to run a school for boys – and one gets the sense this is the ONLY reason they train girls at all. 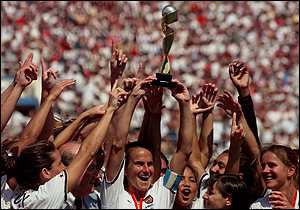 Incredibly, in the letter sent to players informing them that the team was disbanded – and that they couldn’t play even on their own under the name – the organization’s leaders explained that it had never been their ‘intention to become involved in women’s football at a high level’. In his 2005 article for the Salford Advertiser, Tony Howard cites a Man U spokesman: “We have always made it clear the ladies’ and girls’ section was about community partnership and education rather than establishing a centre of excellence. Ultimately the hope is the boys will progress to the first team. So naturally more resources are put into that area because it is our core business.” 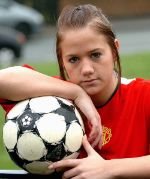 Enough said – women’s soccer is only as good as a side show. According to the May 2005 Man U shareholder’s newsletter, Hayley Bates (pictured here on the right), saw the dismantling of the team as the final expression of “a pattern of a lack of respect for the women and sexual discrimination since the inception of the women’s department.” The team members were given plastic water bottles as a send-off.

As I know the Man U guys in the office and on the pitch wouldn’t listen to anything that felt at all feminist-y, I would recommend they watch a couple of films about women athletes – like Dare to Dream: The Story of US Women’s Soccer, an HBO documentary about the US team that won the world cup in penalty kicks before a statium audience of 90,000.

Or This Is a Game Ladies, about top ranked Rutgers University Women’s Basketball team and their inspiring coach C. Vivian Springer (these women were infamously the subject of racist/sexist remarks from radio host Imas, who very much picked on the wrong group of woman – check out a recent highlight of their season here).

Anyway, what if Man U players make a point of talking to the women who play football in Manchester – Why not begin to learn about women by learning about women who have a lot in common with male athletes, but who enjoy none of their privileges?

The women of Manchester have a right to expect the city’s men to take an interest in their side – not just to defend it, but to, in fact, fight for it. FC United, the fan-owned club formed in 2005 by disgruntled Man U fans (wary of the new American owner Glazer whose takeover coincides with the axing of the women’s team) should, according to their website, be forwarding a ladies’ side about now. I look forward to seeing them in action.
.

Jennifer Doyle writes a blog from the unique point of view as a woman who plays (currently in a London league), who has a feminist perspective on the beautiful game, and expertise in amateur football in the Los Angeles.

There isn’t much sustained soccer commentary from a feminist perspective, there’s very little writing about amateur football, and most of the press in the football (UK)/soccer (US) is ill-informed. As Jennifer says herself: “My blog inhabits these odd corners in the field (excuse the pun).”

For more information visit From A Left Wing .