Real Madrid will need to overcome a 1-2 first leg deficit from Turin if they’re to set up the first-ever El Clasico UEFA Champions League final.

Barcelona booked their place in Berlin’s final next month with a 5-3 aggregate victory over Bayern Munich in their semi-final, whilst Madrid manager Carlo Ancelotti may need to win this competition to keep his job.

Juventus proved no easy task in the first leg as they took advantage of some poor Real Madrid defending to score twice in the first leg. The Spanish side have conceded two goals in each of their last three games in all competitions now.

Luka Modrić continues to be out with a sprained knee which is giving Real Madrid problems in the centre of midfield. Sami Khedira continues to be excluded from the squad, as he has been for a while now – though the official word is that he has a ‘foot injury’.

Karim Benzema and Toni Kroos are both doubts but both have been included in the matchday squad.

Kwadwo Asamoah and Martín Cáceres continue to be out as they were in the first leg, but there are no new absentees for manager Massimiliano Allegri, who also has Paul Pogba back from injury. 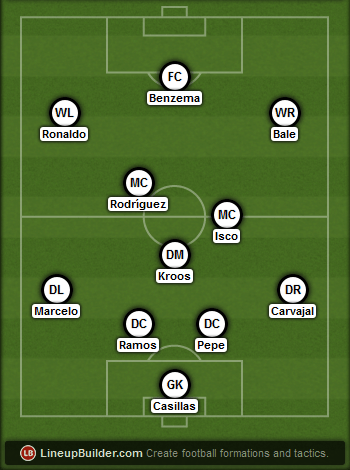 The return of Karim Benzema, if he’s fit to start, would likely see Real Madrid move back into their usual 4-3-3 system. This allows Sergio Ramos to move back to centre-back after being a major liability in front of the back four. Toni Kroos will play the anchor man in midfield, whilst we expect Gareth Bale to start on the right despite a couple of quiet performances of late. 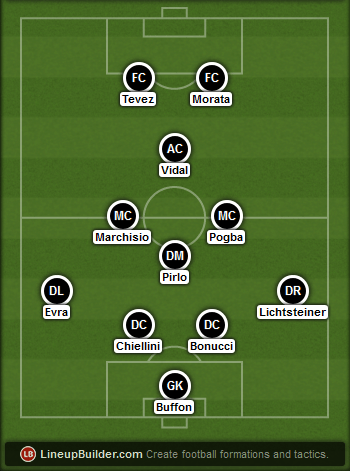 Paul Pogba can come back straight into the Juventus midfield to add some steal in front of the defence. Both he and Arturo Vidal are both deadly with their long-range shots too. We can’t see why Allegri would make any substantial changes to his side so we’re going with the obvious lineup.

Cristiano Ronaldo vs Stephen Lichtsteiner
The Portuguese superstar got on the scoresheet in the first leg when the defence let him go free inside the six-yard box for a free header. Other than that, Juventus were able to largely neutralise Cristiano Ronaldo’s threat in the first leg. Still, they are in for another tough 90 minutes at the Santiago Bernabéu this evening if they’re to accomplish similar.

Isco vs Paul Pogba
The midfield battle will of course be of great importance in this match. Real Madrid are running out of central midfielders but one very talented one they have not to be overlooked is Isco. The Spanish international can unlock defences and is good at maintaining possession for his side also. Paul Pogba will be looking to break up possession of the La Liga side and spring counter-attacks. Also an exciting player to watch should make for an entertaining battle.

Carlos Tevez vs Pepe
Carlos Tevez and Juventus hurt Real Madrid on the counter-attack in the first leg and have the ability to do the same in Spain. Pepe and Sergio Ramos can be both prone for getting too far forward and leaving space at the back as was evident in the first leg from which Juventus won a penalty for their second goal. Tevez is quick and an excellent player on the counter.

21% – Carlo Ancelotti has won only five of his 24 previous matches versus Juventus as a manager.

70% – Juventus have reached the final from seven of their previous 10 Champions League semi-finals.

150 – Iker Casillas will make his 150th appearance in the competition provided he plays this evening.