The rash fouls and referee rants started early in MLS this year.

There were seven sending offs this past weekend in relatively unimportant MLS match-ups. In the contest between the hapless Galaxy and Chivas USA, the referee red-carded LA’s US international star Gregg Berhalter in his MLS debut for hauling down a player with a clear goal-scoring opportunity, and ejected the Galaxy’s Alan Gordon (dissent) and Chivas’ Paulo Nagamura with two yellow cards apiece.

The Sounders’ Kasey Keller was ejected for handling the ball outside the box, and San Jose’s Shea Salinas jettisoned from the Fire match. Houston’s Mike Chabala was booked with reckless challenge and punted, as was Carlos Johnson of the floundering NY Red Bulls.

The plethora of cards early in the season might represent a crackdown by the league. The ejections were for several offenses, but it’s clear the players were testing the water because of MLS referees’ reputation for inconsistently calling games.

MLS is a fast, athletic league and technical players valued, but not protected. There’s no shortage of quality players, but also no shortage of marginal players who’ll do whatever it takes to win the ball. Most compromised are skilled players likely to score or outplay, often from foreign leagues where the emphasis is more technical.

There are also trophy tackles by ambitious young players, such as the assault by FC Dallas’ Adrian Serioux on David Beckham. With quality players at a premium in MLS, some protection for more technical players may be warranted. 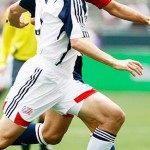 Chris Albright, a former national team player currently with the New England Revolution, is a veteran of the American game and has won three MLS Cups with the LA Galaxy and DC United.

“We’re a physical league so we have to be careful to try to keep it clean,” said Albright. “But that being said, you just can’t go throwing guys out left and right – that’s why it all comes back to feel, it all comes back to understanding what’s going on in the game, what time it is, how much time is left, and if there was more intent in a foul.”

The sometimes arbitrary nature of cautions has game-changing consequences in MLS. Last season a referee ejected Jeff Larentowicz in the 7th minute for a cleats-up tackle with no player contact and that decision resulted in a 4-0 loss to the Chicago Fire. The following week, the same referee punished Houston’s Ricardo Clark for a cleats-up tackle with physical harm but only gave him a yellow. The affect of these conflicting decisions gives the referee less authority down the road.

1) Let them play – Let players work things out, govern themselves, gifted athletes, they want to play at the highest level.

2) Control the game – Let players know their boundaries from the beginning. The first raised elbow gets a card. Result? In theory, no more raised elbows.

Why do these two philosophies go wrong? Dogmatic adherence to one or the other as opposed to a good feel of the game.

Philosophy #1 gone wrong – If player A’s sub is warming up on the sidelines and player A doesn’t make an impact in the next few minutes, he can find himself without a job. So player A comes in hard, then player B pulls a jersey, then players C and D go from bad to worse. Then the referee is forced to pass out cards for offenses he previously overlooked just to keep the game under control.

Philosophy #2 gone wrong – The referee becomes the 23rd player, showing cards early to make his point then refrains from cautions in the second half, suddenly aware that 9v10 players makes a poor game.

How to improve the consistency of the calls

Andrea Canales at Goal suggests increasing the talent pool for US referees through a short-term exchange program with foreign referees. Bringing in experienced foreign talent is a good idea, but only for the long term, as short–term referees will likely increase the inconsistency between games and referees.

Another suggestion is to lighten up on the diving calls, which MLS referees make quickly and effectively; diving in MLS pales in comparison to South American leagues where it’s cultivated as an art. Comparatively, is it that wrong for a targeted player to preempt an attack from a sub-par player at first touch?

If the referees relax their strict standards here a little, they may not have to eject players and call for trainers as frequently. In a long-established league, this might not be necessary, but with the wide variety of talent circulating in MLS, it may be worth offering the best players a little more protection.