Arsenal are looking to maintain their UEFA Champions League challenge with three points at Loftus Road this evening.

Queens Park Rangers dropped into the relegation zone following Aston Villa’s win over West Brom on Tuesday and have lost five of their last six in the Premier League, winless in their last four at home, scoring just once during this run.

Arsène Wenger’s side have won their last three in the league but have not been overly convincing in either.

Caretaker manager Chris Ramsey says defenders Mauricio Isla and Nedum Onuoha, and midfielder Sandro have all recovered from various knocks and are available for this game.

The experienced Richard Dunne is set to miss his third straight Premier League game with a knee injury that could keep him out for the remainder of the season.

Leroy Fer also has a knee injury that is going to keep him on the sidelines for a while, a big loss in the Rangers midfield. Joey Barton is suspended.

Mathieu Debuchy is still out but Arsène Wenger has two options at right-back available.

Mathieu Flamini is going to miss this evening’s game as well as the FA Cup tie at Manchster United on Monday. Jack Wilshere will also missed the trip to Loftus Road whilst the manager expects Francis Coquelin to play even though he received a broken nose at the weekend. Aaron Ramsey is ready to make his return. 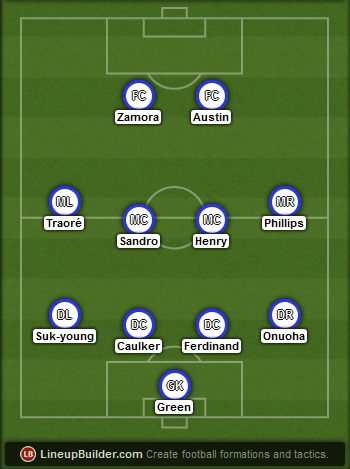 Chris Ramsey has been sticking with the 4-4-2 formation so we think he’ll go with that again. Joey Barton suspended could see Sandro come into the centre of midfield. We’d be surprised to see Niko Kranjčar started there. Matt Phillips and Armand Traoré offer pace down the wings on the counter attack. 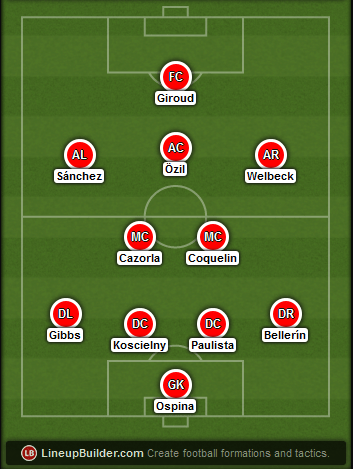 This back four kept a clean sheet over the weekend and despite a couple of nervy moments for Gabriel Paulista, he can keep his place ahead of Per Mertesacker. Mesut Özil set up both goals at the weekend whilst Santi Cazorla had another excellent game. Alexis Sánchez has not scored in seven games in all competitions now – does he start on the right or left? Danny Welbeck and Theo Walcott are fresh to start down the right wing after Alex Oxlade-Chamberlain played there on Sunday.

Alexis Sánchez vs Nedum Onuoha
Queens Park Rangers’ returning right-back faces a tough match up against one of the best players of the 2014-15 Premier League season. If Nedum Onuoha doesn’t start then it Darnell Furlong may after making his debut over the weekend. All-in-all, this defence does not match up well to the Arsenal attack on paper and Alexis Sánchez has the ability to tear them apart.

Olivier Giroud vs Rio Ferdinand
Arsenal’s sole striker scored the opener at the weekend and like he did versus Monaco, he got into positions to score goals. Olivier Giroud seems to be good at that and should find space in the penalty area versus this defence. It will all depend on what boots he has on, but we certainly favour Giroud to get on the scoresheet in this one.

Santi Cazorla vs Sandro
Arsenal’s Spanish playmaker in the middle of the pitch won’t have to do battle with Joey Barton. Instead, the returning Sandro may be starting there. The Brazilian should be a little rusty whilst Santi Cazorla has the footwork to get the better of him, creating chances for his teammates and lining up shots himself.

Prediction: Queens Park Rangers 0-2 Arsenal
Arsenal are getting the results of late and Queens Park Rangers are not so we’re going with an away win at Loftus Road this evening. The Gunners match up well on paper going forward in this one and as long as they’re not hurt on the counter attack with QPR’s pace and Charlie Austin, then three points should be heading their way. Perhaps Alexis Sánchez will get on the scoresheet again too.