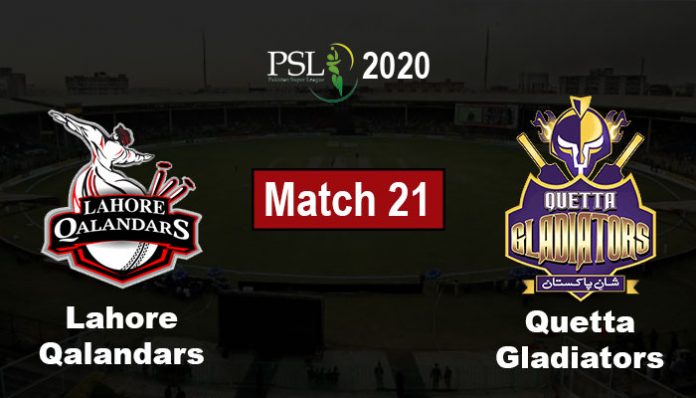 Quetta Gladiators will take on Lahore Qalandars in a mouth-watering PSL clash at the National Stadium in Karachi on Monday.

The Sarfaraz Ahmed-led side will hope to bounce back after the disappointing defeat against Karachi Kings.

Tom Banton and Sarfaraz Ahmed look solid openers for Quetta Gladiators, even though both failed to impress in the opening match against Karachi Kings.

Banton had scored just five before falling victim to Imad Wasim, while Sarfaraz also made a disappointing 7 off 7 before losing his wicket.

Both players will be eager to bounce back and provide a good start to their team in the next match.

Gayle looked spectacular in the first PSL game as he struck four boundaries and two sixes to make 39 runs. Azam also contributed 17 before departing the ground.

Meanwhile, Ayub looked to be struggling against Karachi and managed to make only eight runs off 14 balls.

All-rounders Mohammad Nawaz and Ben Cutting failed to impress in the previous game and both will be hoping to give better performances in today’s encounter at the National Stadium in Karachi.

The two players failed to pick up any wickets and were equally disappointing with their batting performance.

Mohammad Hasnain and Usman Shinwari were impressive with their bowling in the defeat against the Kings. However, the same thing cannot be said about Qais Ahmad and Naseem Shah who not only failed to pick up any wicket but were also very expensive.

If the Gladiators want to overcome Lahore, these four bowlers will have to do a better job than the last time.