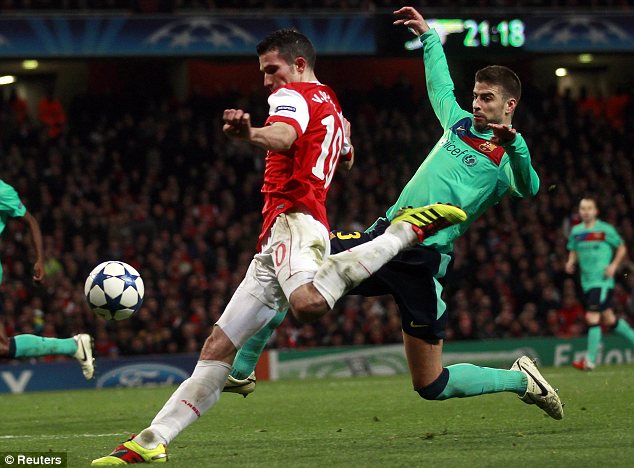 Fun fact: There are different types of pressing.

It could possibly seem common sense that the quicker the tempo the opposition attempts to play the ball around, the quicker opposition should press. Which usually can work quite well, except that Barcelona are far, far too good at keeping the ball, and exploiting the space left.

It was mooted before yesterdays clash of the supermodels of elite football that Arsenal would have no proper way of stopping Barcelona – they could not sit back in their penalty area and see if Barcelona could scale the fortress, as Mourinho and Inter Milan did successfully at the end of last season. At the same time it was said by many that Barcelona are the better side and above and beyond agressive pressing, which is probably correct. When Arsenal spend 60 million combined on a striker and a wingback/ wing landlord then you can get back to me and say Arsenal are on the same type of ground in sheer quality they can call upon.

Yet what no-one really considered is that there is a happy medium between the two. Barcelona did dominate possession – 66% to Arsenal’s 34% – but where they had the ball, Arsenal had almost just as much territory – 47.6% to Barcelona’s 52.4%. This speaks volumes about how much Barcelona were really able to do with the ball – and this is because while Arsenal did press Barcelona rather then sitting off, they did it slowly. Frequently the Arsenal players would merely jog toward the ball carrier – while this doesn’t help win the ball, it is an excellent way of narrowing down the space and still being able to move quickly back into position in case of Barcelona inevitably popping the ball around the pressers. Compare this to a team who might press Barcelona very aggresively – leaving an altogether wider gap in their lines then Arsenal’s less commited but more conservative form of pressing.

The result was that where Barcelona created chances, so did Arsenal. In fact, Arsenal had just as many shots on target as Barcelona and more off target (Arsenal 5 on target, 4 off. Barcelona 5 on target, 3 off target.) And this doesn’t take into account those times when there was a final ball astray, or when Abidal made a goal saving header to deny Van Persie in the first half. So where Barcelona dominated with the ball, Arsenal were perfectly capable of creating chances. As if to further back up this view, Barcelona had more tackling to do then Arsenal did, (20 tackles to Arsenal’s 18) raising the question as to wheather Barcelona’s possession really did enough damage for their liking.

This half pressure not only helps Arsenal maintain their shape but, critically, it also takes advantage of one of Barcelona’s self created weak points. Daniel Alves is one of those players you could describe as a force of nature – an undisciplined but devastating attacking player who is in my opinion the best attacking wingback on the planet, and he is also a shining example of Barcelona’s ferocious off the ball game – how they attempt to win the ball back within seven seconds of losing it.

But when Arsenal are holding a line between pressing and good shape, Barcelona were relentlessly bearing down upon Arsenal in the first half, and while it did put Arsenal in occassional discomfort and made me question Arsenal’s passing out of defence, it did one pivotal thing – and that was tire Barcelona out. Their pressing can work excellently against most teams – but as the game wore on Arsenal grew stronger, more able to keep the ball as Barcelona’s pressing slowed. Their equalising goal (although really it should have simply narrowed the deposit if not for Barcelona’s disallowed goal) was no more then Arsenal deserved. They had constantly exploited the wingbacks of Barcelona, and what is usally such a devastating tool in all sections of the pitch, suddenly Maxwell and Alves were leaving their defence exposed, as their pressing up the pitch failed.

The result of Alves tearing up the flank for 80 minutes was Arsenal’s second goal, and the one that has blown the tie open. Nasri, breaking free on the right side of the pitch, cutting inside and feeding Ashavin who in his own typical style, took the first chance he had with aplomp. With his wingback, Dani Alves, nowhere to be seen.

Where Arsenal’s cautionary pressing helped them maintain their shape and hold off a fair portion of the damage Barca can do, Barca’s aggressive pressing proved to undo them. Arsenal proved that possession wasn’t everything – and Pep Guardiola, unfortunate or not, has thinking to do before the next leg in Camp Nou in two weeks time.