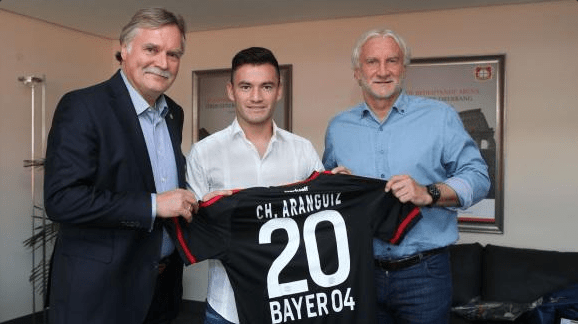 Chilean midfielder Charles Aranguiz has snubbed a move to the Premier League by choosing instead to join German side Bayer Leverkusen from Brazil’s Internacional. The central midfielder has joined for a transfer fee of around €12 million, putting pen to paper on a five-year deal.

He will get his first taste of Champions League football with the Bundesliga side, rather than a Premier giant, as it was earlier imagined. The signing was confirmed by Leverkusen’s official Twitter account, with Aranguiz photographed holding the club shirt with his name on it.

The 26 year-old has caught the eye with performances for his international side in the last couple of years, playing an integral role in Chile’s Copa America win earlier this year.

Chelsea and Arsenal were rumoured to be interested in signing him, as they both are in need of some cover in the centre of the park. According to The Guardian, he was also on the radar of another English club Leicester City. After signing the contract, Aranguiz revealed that it was one of his international teammates – Arturo Vidal, who asked him to sign for Leverkusen. Vidal, who played at the BayArena for 4 years between 2007 and 2011, joined Bayern Munich from Juventus earlier this summer.

“The Bundesliga is one of the best and most attractive leagues in the world, and Bayer have been one of the top teams in it for many years,” Aránguiz said. “My national team colleague Arturo Vidal spoke highly of Leverkusen and that’s why I desperately wanted to come to this club.

“I also see a big chance of playing in the Champions League with Leverkusen. I’m really looking forward to this challenge in a new country.”

Leverkusen have still not qualified for the group stages of Europe’s most elite club competition, after finishing 4th in the Bundesliga last year. They face Italian side Lazio in the qualifying rounds next week, and Aranguiz will want to help them get through and achieve his dream.