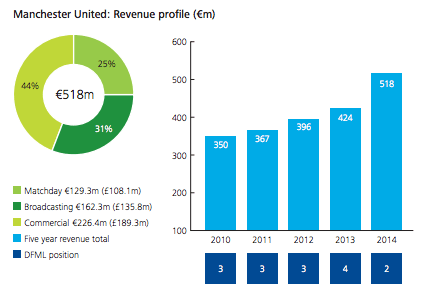 While European Champions Real Madrid continue to enjoy supremacy at the top, the 2015 Deloitte Money League features eight clubs from the Premier League – the most from any country in Europe.

Manchester United, despite going through a disastrous campaign last season, have moved two places up in the second place, with the club reaping the benefits of huge commercial growth and are now strong favourites to become the richest club in the world in coming years. 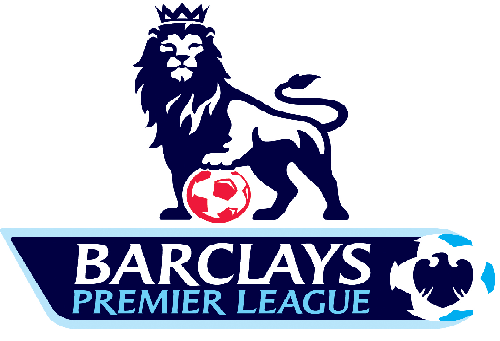 Manchester United moved back into the second spot for the first time since 2007/08, despite the previous season being particularly disappointing on the pitch, with the lowest finishing position (seventh) in the Premier League history and consequently missing out on Champions League football.

Major Boost: United’s commercial strategy of selling regional sponsorship categories around the world along with their already impressive global sponsorship portfolio has seen the commercial revenue increased by 24% (£36.8m).

On top of that, further growth is anticipated in future after world record deals tied up with General Motors (Chevrolet brand on the shirt front) and £750m ten-year deal with Adidas, commencing in 2015/16.

City maintained their sixth position, posting their record revenue, a 28% increase on the previous year. The previous season saw City regaining the Premier League title and claiming the League Cup, and progressed to the knock out stages for the first time before losing to Barcelona in Round 16.

Major Boost: City, like all the other Premier League clubs, have benefitted largely from the significant increase the Premier League broadcast rights.

In City’s case, broadcast represents 32% of the club’s total revenues, however, the major barrier remains for them is the match day revenue, although it rose by 20% to £47.5m last season.

Chelsea finished third in the Premier League and progressed to the semi-finals of the Champions League last season. They have posted a record revenue for 2013/14 season of 324.4m, an increase of 64.4m (25%), yet they couldn’t close the gap enough with 6th placed City.

Chelsea’s match day revenue of £71m in the sixth highest of the DML clubs, and yet there is hardly any scope for financial growth in that area.

Arsenal recorded a revenue over £300m for the first time last season, and although there have been steady growth in match day revenues, commercial sector and broadcast, the Gunners couldn’t close the gap enough with Chelsea & City.

Commercial revenue also grew by £14.7m (24%); the new kit deal with Puma is amongst the most lucrative of its kind and Arsenal will benefit from it over the coming years.

Liverpool returned to the top ten after a one year absence, jumping three places up in 9th following a 24% increase in revenue.

2013/14 was a remarkable season for Liverpool, where they narrowly missed the Premier League title but a second placed finish saw them qualifying for the Champions League for the first time since 2009/10. 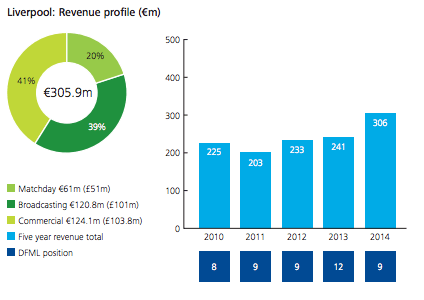 Major Boost: Liverpool have benefited largely from the increased broadcasting revenue, while the focus has been maximised on improving the commercial growth. Several new deals including US fast-foot chains Subway and Dunkin’ Donuts, Indonesian airline Garuda, tie up with Xolo and Vauxhall have helped them increase the commercial revenue by 6%.

Match Day revenue still remains the major hindrance, but with Anfield expansion works underway (that will see them expanding the seating capacity) and hopefully will be completed in 2-3 years, Liverpool can expect to move few places up in the DML in coming years.

Check the finances of other top European clubs here