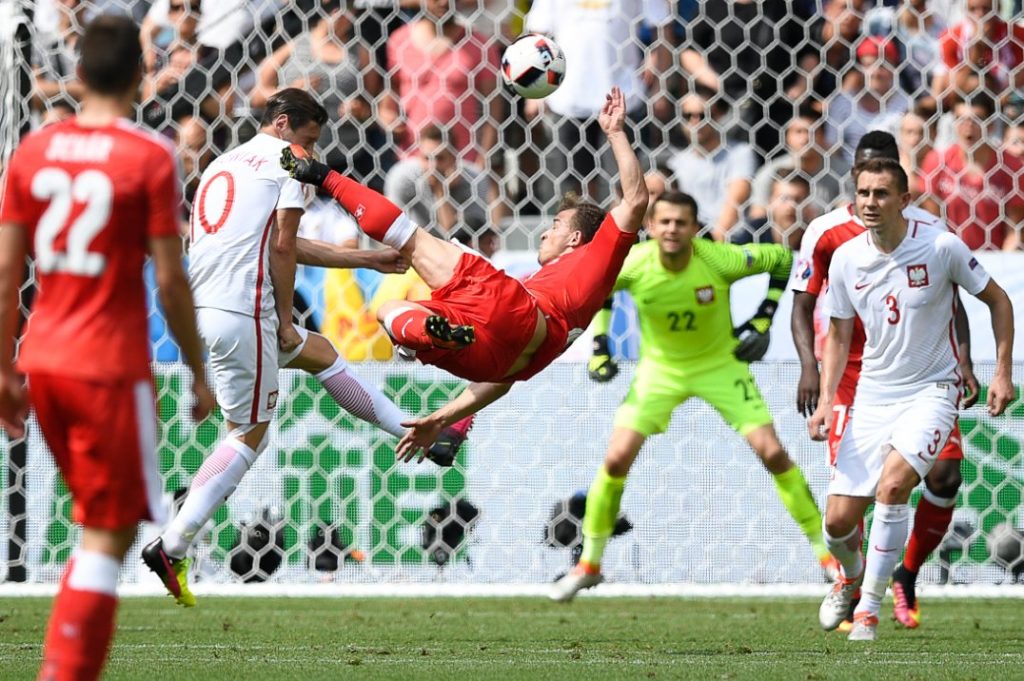 Arsenal midfielder Granit Xhaka missed from the spot as Poland beat Switzerland 5-4 on penalties in the round of 16 knockout tie at the Stade Geoffroy-Guichard in Saint-Etienne.

Poland made a bright start to the game and should have got an early opening goal, after Milik missed from 18 yards out, although he had an open net to score.

The pressure kept coming and Robert Lewandowski had a shot blocked from a tight angle.

It took the Swiss more than 6 minutes to finally have a spell of possession. Xherdan Shaqiri had a promising burst, of which, resulting in a decent half-chance for Dzemaili, who from 12 yards out rippled the side-netting.

Both the teams looked threatening on the counter; Milik tried his luck from 18 yards out but slammed his effort over the bar.

The best chance of the first half fell to Krychowiak. From a corner, the ball was whipped in wonderfully to the Sevilla midfielder, who, unmarked, couldn’t direct his header on target.

In the 39th minute, Poland took the deserved lead through Blaszczykowski. From a dangerous Swiss attack, Poland made a sharp counter from the left. Grosicki, from the edge of the area, played a low cross into Milik, who cleverly dummied the ball to roll past to Blaszczykowski, who coolly finished from 10 yards out to score his second of the tournament.

The Swiss,in search of an equaliser, pressed hard in the second half and created such dangerous chances. Shaqiri once again was the focal point of all the Swiss attacks, and after some nice little exchange of passes, he scurried inside his marker onto his left foot and hits the gloves of Fabianski with a fierce shot.

A poor and heavy touch from Djourou sets Lewandowski free on the right. He had all the time on earth to pick Milik, but his cross was too deep to cause any harm. Blaszczykowski, moments later, tried his luck from distance and produced a left-footed rasper that Sommer did well to punch clear.

In the 71st minute, Rodriguez came close equalising for the Swiss; the Wolfsburg defender’s curling freekick from20 yards out was superbly saved by Fabianski.

The pressure was building. Seferovic rattled the crossbar from the edge of the penalty area. And the Swiss finally got the equaliser in the 82nd minute, when Shaqiri produced a moment of magic out of nowhere. He fired in a scissor-kick from 18 yards out – power,precision, technique –  all blended in one shot. It has to be one of the goals of the tournament, if not the goal of Euro 2016.

4 – Xherdan Shaqiri has scored four times at major tournaments for #SUI, only behind Josef Hügi (6). Specialist.

Shaqiri’s goal was immense, perhaps one of the best in the tournament’s history given the circumstances and how well it executed. #SUIPOL

After a dull opening, 15 minutes of extra time, the Swiss exerted more pressure in search of the winning goal. They were growing in confidence and Eren Derdiyok had a free header from yards out from an exquisite pass from Shaqiri, but Fabianski produced a stunning save.

In the penalty shootout, Arsenal midfielder Granit Xhaka missed from the spot, while the Polish players held their nerves to win 5-4 on penalties.