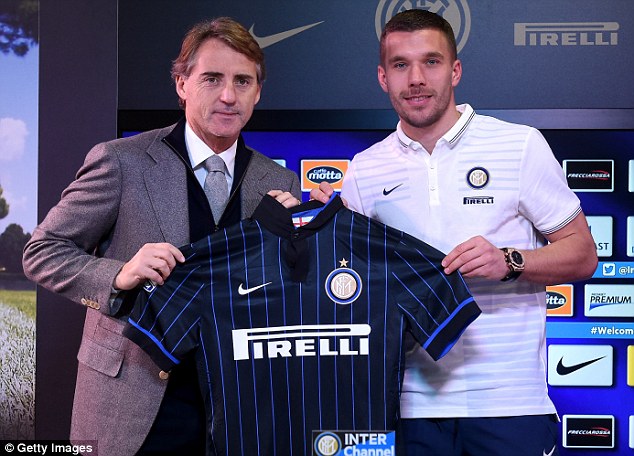 Arsenal forward Lukas Podolski expressed his disappointment at how Arsene Wenger treated him, once he decided to join Inter Milan on loan, earlier this week.

The German forward had grown increasingly frustrated with the lack of first team opportunities at Emirates and has joined the Italian giants in order to kick start his stagnating career.

Speaking to the Sun, Podolski stated that he was surprised that Wenger never spoke a word with him following his decision to go out on loan.

‘He said nothing to me. He did not call me or say goodbye.

‘I don’t need flowers or a kiss from him but it is about respect, about saying goodbye. For me respect is important.

‘I did everything for the club I possibly could have. I don’t believe I did anything wrong. I did not get drunk in a club.’

Further, Podolski was very appreciative of the Arsenal fans, who have shown tremendous affection towards to former Bayern striker.

‘I had a great time at Arsenal, I want to thank the fans and the club,’ he said.

Podolski also revealed how Roberto Mancini was the catalyst in his move to Inter.

‘I didn’t play much and Inter gave me the chance. I had a good chat with [Roberto] Mancini and he made it easy to come.

‘I’m at my best when I play in the middle as a No 10 or a striker but we will see what the manager wants.

‘He is a great coach, he has great experience from Manchester City and is a great name in Europe and the world.’