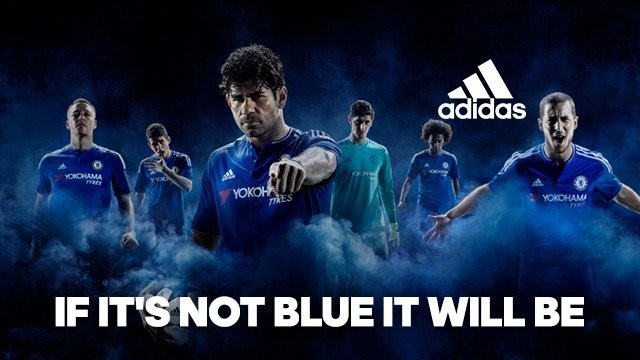 Chelsea have officially unveiled their home kits for the 2015/2016 campaign. The Blues will continue with long-term manufacturers Adidas while there is a change in the shirt sponsors for the first time in eight years. This after the club signed a mega five-year deal with Japanese tyre giant The Yokohama Rubber Company worth £40 million per year. As a result, this will be the first time since 2006 that Chelsea’s kits will not sponsored by Samsung.

The club have launched a campaign called, “If it’s not Blue, it will be”, and players including Diego Costa, Eden Hazard, Oscar, Juan Cuadrado, John Terry, Gary Cahill, Ruben Loftus-Cheek, Willian and Nemanja Matic have been involved in the official launch video and photoshoots. The tagline is in keeping with the club’s goal of achieving European dominance next season, while also retaining their Premier League crown.

If it’s not blue, it will be. Introducing the 2015/16 @ChelseaFC home kit. http://t.co/gqaoiRVHyk #BeTheDifference https://t.co/d85QOy4Duu

The kit features red stripes, along with the traditional blue and white, for the first time since the 2010/11 season. These stripes appear both on the sleeves as well as the collar. A very unique feature is the fingerprint mark woven onto a label on each shirt, something that has never been seen before.

The Yokohama Tyres’ logo is imprinted in red and the name of the company in white, but the dominant colour, as always, is blue. The same colour combination can be found in the shorts, while the socks remain the classic while and blue.

The goalkeeper’s kit, modeled by Thibaut Courtois, is turquoise in colour with dark blue strips on the sleeves, along with shorts and socks of the same colour.

Chelsea have landed in Toronto for their pre-season tour of North America, and will showcase their new kits for the first time against the New York Red Bulls on the 22nd of July.