Petr Cech has completed his long-awaited move to Arsenal, Chelsea have confirmed on their official website. The 33 year-old has finally put pen to paper on a deal at the Emirates, that is expected to be in the region of £11 million. 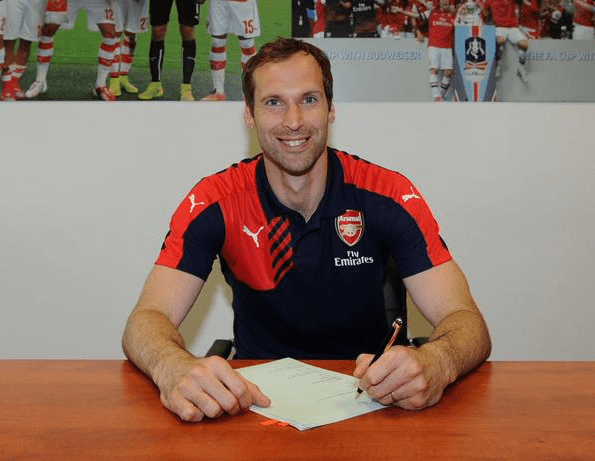 Cech left a message to everyone at Chelsea Football Club, following 11 glorious years at Stamford Bridge where he won every competition the Blues competed in.

He was signed by the club in 2004 from Rennes, before the arrival of Jose Mourinho. The Portuguese arrived later in the summer and made the Czech the first-choice goalkeeper, at the expense of Carlo Cudicini. Cech went on to become an integral part of the side for the next decade, along with the likes of John Terry, Frank Lampard and Didier Drogba. In all, he leaves Chelsea after winning 4 Premier Leagues, 4 FA Cups, 3 League Cups, 1 Europa League and 1 Champions League title.

His career highlights include the record-breaking 2004/05 season, when Chelsea conceded just 15 goals en route their first league title in 50 years. Cech was also one of the most consistent performers in the Blues’ extraordinary Champions League triumph of 2012, saving a penalty from Arjen Robben in extra-time, before keeping Ivica Olic and Bastian Schweinsteiger in the shootout.

He is only 2 clean sheets away from David James’ all-time Premier League record of 170. With 168 shut-outs for Chelsea, he holds the record for the most clean sheets at a single club.

Arsenal are now expected to sell David Ospina, with Turkish club Fenerbahce reportedly interested. Cech, on the other hand, is scheduled to make his debut for the Gunners in the Community Shield on August 2 at Wembley against (wouldn’t you just know it) Chelsea.