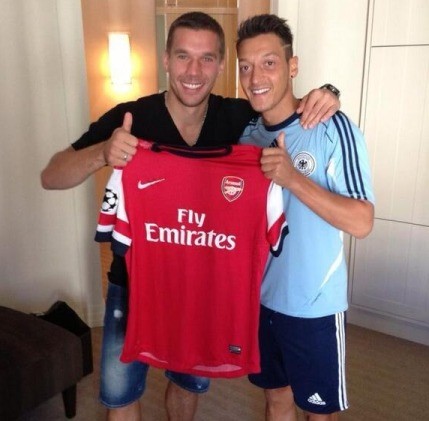 Arsenal have stunned everyone (even their own supporters) by signing Real Madrid superstar Mesut Ozil on the transfer deadline day.

The Gunners broke their transfer record, after agreeing a £42.5 million deal with the Los Blancos to price away the German international.

Ozil was with the Germany national team, before he completed his medical yesterday and we present you a snap of him holding the Arsenal jersey with fellow new team-mate Lukas Podolski. 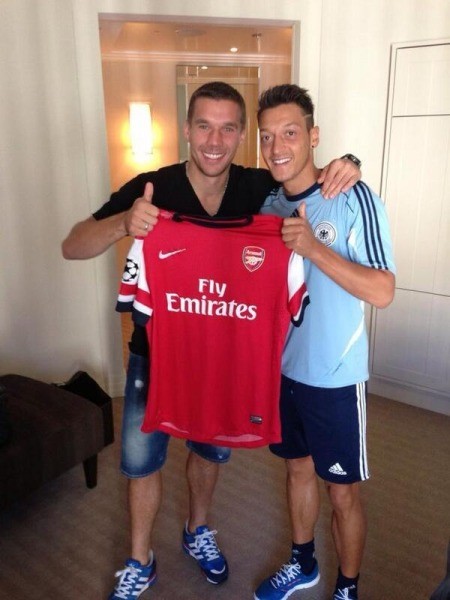 “It will be great for my own personal development as a player and I am particularly looking forward to working with Arsene Wenger,” Ozil told Arsenal.com.

“From our negotiations it is clear the club has huge ambition and I look forward to being part of an exciting future.”

The 24-year-old, who has made over 100 appearances over Madrid, is the third signing of the Gunners this season, following the arrivals of Yaya Sanogo and Mathieu Flamini, both joined on free transfers.

Arsenal looking to bounce back strongly after the opening day defeat to Aston Villa, will find a new sense of optimism, having secured one of world’s best attacking midfielders, who they believe, will help the club lead the charge, for glories this season and beyond.