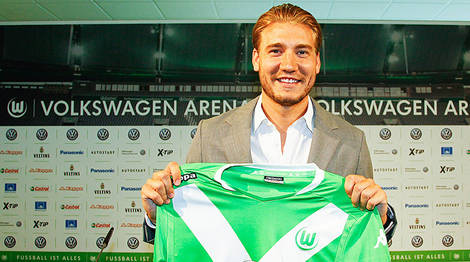 After being released by Arsenal as a free agent this summer, Nicklas Bendtner has finally managed to get a club as he has agreed a three-year deal with Vfl Wolfsburg.

The former striker of the North London club was a free agent and has now completed his switch to the German outfit on Friday. The Danish international was delighted after joining Wolfsburg and says Volkswagen Arena is the right place for him.

“VfL is a big club with good players and a good environment. When a club like that is interested in you, that makes you happy – which is why the decision to come here wasn’t difficult,” Bendtner told his new club’s official website.

“Wolfsburg is the right place for me. I had German at school. I don’t think that it will take me long to learn it now. The Bundesliga is anything but unfamiliar territory for the front-man,”

“It’s a fantastic league, which has developed really well in recent years. The World Cup was also proof of just how brilliant German football is,” he added.