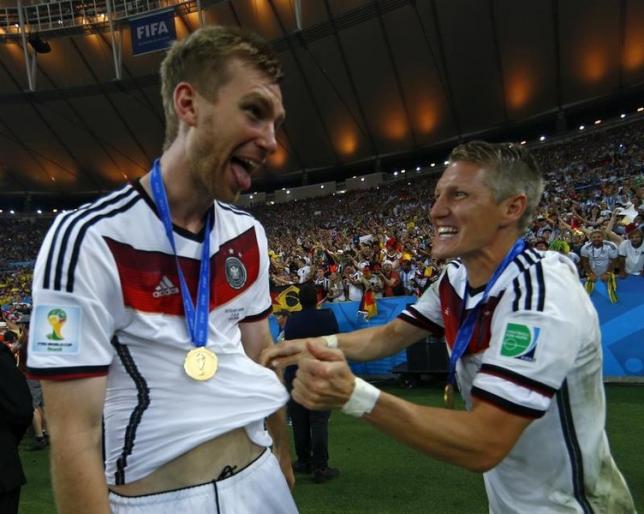 Arsenal defender Per Mertesacker has praised his fellow compatriot and Manchester United’s new signing Bastian Schweinsteiger, saying he could become a key player for the Red Devils.

The German skipper left Bayern Munich in the summer to United after long 17 long years stay at the German club where he won host of major trophies, including eight Bundesliga titles.

Mertesacker says that Schweinsteiger’s transfer to Manchester United is a good move for the midfielder’s personal development and also for the German football in general.

“You could see in his first days here, how he blossomed. He came here with a command of English, and it came over big,” Mertesacker, who joined Arsenal from Werder Bremen in 2011, said as quoted by ESPN.

“It’s a good move. For him and his personal development, and also for German football.”

“He knows that a lot is expected of him as a world cup winner. It’s incredibly important for him that he stays healthy. Should that be the case, he will implement everything Louis van Gaal expects from him.

“He can keep the ball, he’s got a great control of the ball, that’s what distinguishes him.

“He can become the central player at Manchester United, who like to control the opponent and then breakthrough in the deciding moment.”

There has been a concern over Schweinsteiger’s fitness, with Bayern Manager Pep Guardiola admitting that the German superstar had not been in best physical shape for the past three years.

The 31-year-old wasn’t included in Manchester United’s starting XI against Spurs, but he received a warm welcome from the Manchester United fans, when he came off the bench in the second half.

Mertesacker believes that ‘Basti’ has taken the right step in his career and it takes courage to move away from the comfort zone. Schweinsteiger is a world class player, and if he stays fit through out the season, he could leave a great impact on Louis van Gaal’s side.