Arsenal defender Per Mertesacker has announced his retirement from international football. The Germany defender, who will be 30, this September, played 104 times for his country and finished his international career on a high by winning the World Cup in Brazil.

“Winning the World Cup was the best possible end to 10 years in the national team,” said Mertesacker. “I’ve moved aside to let younger players take over.

“We don’t have to fret about the future, we are better equipped than ever before. I’m happy that I’ve been able to play for so long, happy that people have trusted in me.” 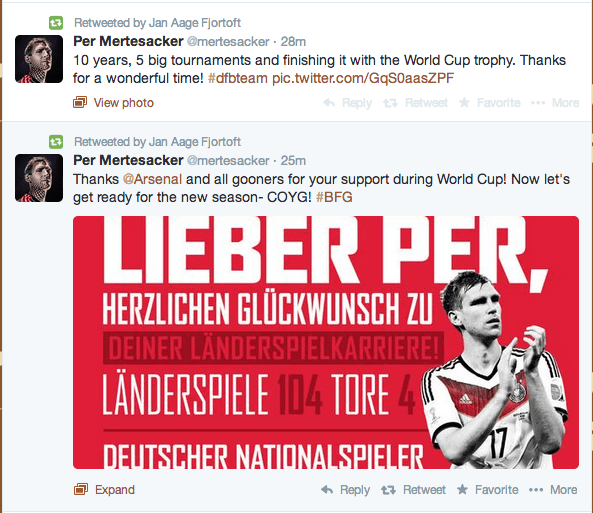 The German defender however insists that he feels more motivated to win silverwares with Arsenal.

“I’m still hungry for more titles, but I want to win them with Arsenal – to win the league, perhaps have a go at the Champions League. We’ve got a taste for silverware now, after winning the FA Cup.

“I’m a world champion but you can’t let yourself go because of that,” added Mertesacker. “There are new challenges. I’m vice-captain at Arsenal and I know that I have more responsibilities now. I want to achieve big things with the club.

“Having more time off for your legs and your head is not a bad thing in that respect – especially at my old age.”