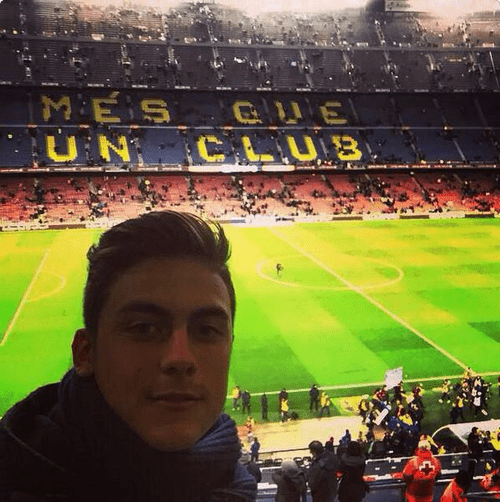 Palermo striker Paulo Dybala who has been linked with Manchester United, Arsenal and Chelsea was present at the Camp Nou on Sunday to watch Barcelona take on Real Madrid in the El Clasico. The 21-year-old striker who has been in stunning form this season has been quoted at a transfer price of €40m by the outspoken club president Maurizio Zamparini.

We had reported earlier that Arsenal are trying to make early moves by planning to meet Zamparini but Chelsea also made a contact with the striker’s agent to edge ahead in the race for the 21 year old. Dybala has scored 12 goals and grabbed 7 assists in 27 appearances this term.

However, Dybala’s entourage has reportedly told Zamparini that the Argentine wants to stay in Italy, which could see him move to Juventus in the summer despite napoli also being interested.

Dybala had earlier said he dreams of a move to Manchester City or Barcelona. Speaking about his future, Dybala had said as quoted by The People Person, ”When I play with the Playstation, I always choose Barcelona or Manchester City. I dream to play one day with one of those clubs.”

Does Dybala’s presence at the Camp Nou hint at anything regarding his future? Let us know in comments below.