Arsenal superstar Mesut Ozil strongly feels that the Gunners have the potential to mount a serious challenge for the Barclays Premier League title this season. Arsene Wenger’s team is top of the league after 10 games, five points clear of their nearest rivals, and Ozil, the record signing for the Gunners feels the squad can maintain that juggernaut till the very end. 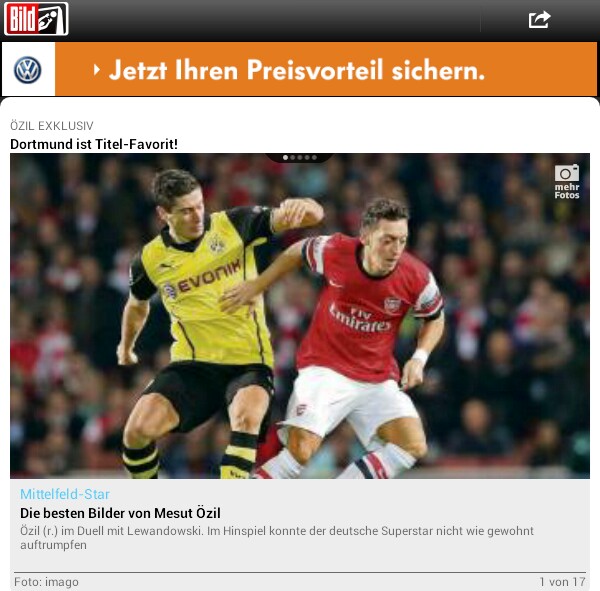 The Gunners will face German giants Borussia Dortmund in the crucial Champions League encounter on Wednesday. And ahead of the match, Ozil gave an interview with local newspaper Bild, where when asked about Arsenal’s title credentials, he said:

“Why not! After ten games we are five points ahead, and the team also has the potential to stay in front of others at the end of the season.”

Arsenal lost to Dortmund in their last European match at the Emirates. A Robert Lewandowski goal towards the end of the match, earned the away side full three points. When Ozil was asked how deep the stinging pain is, the German replied that he feels annoyed with every defeat, especially if it comes in front of home crowd.

When asked whether being a former Schalke 04 player adds an extra motivation while facing Dortmund, the silky assist-master replied:

“No. I’ve been here for more than six years away from Schalke. It does not matter anymore – Champions League games are motivation enough.”

The former Real Madrid star further adds that he is enjoying everything about London and Arsenal – the players, manager, the city and also the direct passing of former Dortmund player and now his team-mate Tomas Rosicky.

Can Arsenal really win the Premier League? They are 11/4 with Ladbrokes to clinch the Premiership title this season…