No regret from Arsene Wenger for shoving Jose Mourinho

It’s the same old story for Arsene Wenger against Chelsea and Jose Mourinho. Wenger’s awful shove of Mourinho takes all the limelight but it was the old story, all too familiar disappointment of defeat for the Gunners: Another Chelsea victory, another Jose Mourinho’s victory over Wenger, against whom he remains unbeaten in 12 encounters.

Wenger has refused to apologise for shoving Jose Mourinho in the chest and claimed that it was just a “little push” given to his opposite number. The Arsenal manager justifies his action by saying he was merely seeking to get to the pitch to check on Alexis Sanchez, who was left injured after a sliding tackle from Gary Cahill. 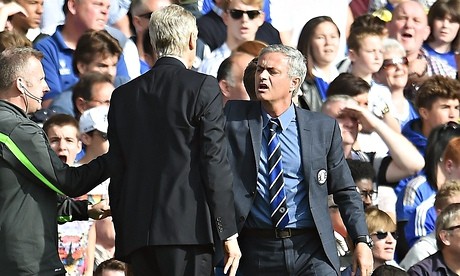 “You would see if I really tried to push you,” Wenger said as quoted by The Times. “Come on. What is there to regret? I wanted to go from A to B and somebody confronted me before B without any sign of welcome. I was going to see Sánchez, to see how badly he was injured.

“I trust you to teach me all the moral lessons in the next two weeks, and I can accept that. I’m long enough in the game to see things the right way.”

Mourinho had no reasons to get into another war of words with Wenger but claimed he had done nothing wrong and instead pinned the blame on Wenger.

He said after the match: “A football pitch is a football pitch. Jonathan Moss did well and [referee] Martin Atkinson did well too. But to be fair, I do so many wrong things in football and sometimes lose emotion, but not this time. This time I was just in my technical area and it was not my problem.

“It becomes heated because it’s a big game, with big clubs, big rivals, and an important match for both teams. I think these conditions make a game of emotions. After that there are two technical areas. One for me, and one for him. He was coming into my technical area, and not for the right reasons to give some technical instructions. He was coming to push the referee for a red card, and I didn’t like that. But I think Moss did a good job.”

Chelsea lead in the first half through a penalty from Eden Hazard. The Belgium international showed a great piece of skill to get past three players before being fouled in the box by Koscielny.

Diego Costa doubled the lead in the second half with a delightful lob over Wojciech Szczesny; the pass from Cesc Fabregas was simply outstanding.

With this victory, Chelsea cement their position at the top of the league with 19 points, five points clear of Manchester City.