German giants Bayer Leverkusen have made it clear that they have not received any offers for star midfielder Lars Bender from Arsenal.

The Daily Star claimed yesterday that Arsenal have had £18.5million bid rejected by the German club but manager Arsene Wenger refuses to give up and could try again for the midfielder in the January transfer window with a £20million offer. The Frenchman is looking to find a box-to-box midfielder as future replacement of Mikel Arteta.

Back in 1st July, 2013, The Guardian writer Dominic Fifield reported that Bayer knocked back an approach from Arsenal and turned down an inquiry, making it clear that Bender is not for sale at any price. 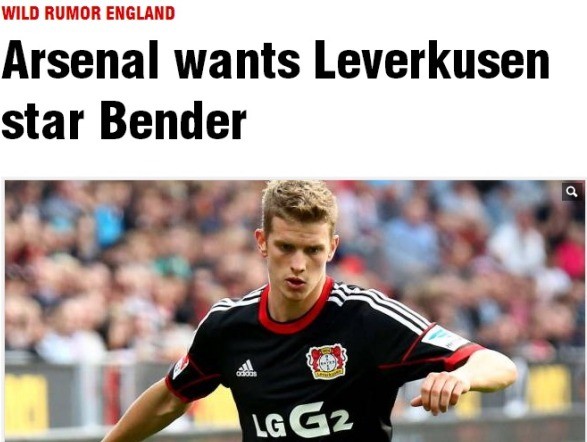 The German newspaper Bild as we can see in the image has reported the story as nothing but a wild rumour. However, they claims the Arsene Wenger is a big fan of the German star and was interested to sign him in the summer. They contacted Sporting Director Rudi Voeller to investigate in details about the report.

The former German star said: “We are not willing to sell Lars. At the moment, we haven’t had an offer for him. Much more important is that Lars was not seriously injured yesterday.”

Bender was in action against Hannover where he was replaced in the second half following an ankle injury.

We all know how hard it is to out-haggle Bayer in the negotiation table. Chelsea have had a tough time capturing Andre Schurrle and though the German newspaper claims that there was an indeed a genuine interest from Arsenal, but the German club won’t do any business for the player who has a contract till 2017.