Portugal newspaper O Jogo is absolutely convinced that Benfica winger Nicolas Gaitan will leave the club in the summer.

Over the past one month or so Portugal press have been covering reports extensively on Gaitan’s future. The Argentine has been a long term reported target of Manchester United. His name always pops up in the press during any transfer window and this summer is not an exception to that trait.

Interestingly, Gaitan has been linked with Chelsea this time along with usual link with United. We bring you the development of this saga step by step.

13th May, 2015: A Bola claims that Chelsea are plotting a summer move for the Benfica winger. We wrote:

“Portugal newspaper A Bola (newspaper edition) claim today that Premier League giants Chelsea and Spanish club Valencia are both interested in signing him. Gaitan has a €35m release clause, but Benfica are hoping his market value would rise with a good Copa America campaign this summer.

They add that Chelsea have been observing him in the past few weeks and that Gaitan’s exit from Benfica is a likely scenario. Nothing really concrete here. No actual offer. No bids. Nothing.”

May 23, 2015: A Bola claim that Benfica officials were in London to sort out a deal for Gaitan. No clubs were mentioned, but we guessed probably they referred Chelsea.

May 27, 2015: A Bola published a bold ‘done deal’ report, where they claimed Manchester United had agreed a 30m deal to sign Nico Gaitan. It’s a strong claim which eventually turned out to be false.

What Gaitan has to say amid all these?

“I’ve been at Benfica for 5 years and there have been rumours of my exit for… 6 years. If there are offers, I’ll study them, that’s our life. But for now my focus is on Benfica.” 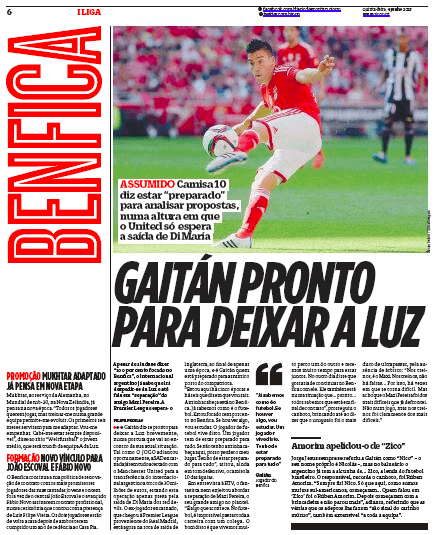 Portugal newspaper O Jogo has a report on Gaitan today where they claim despite the player’s desire to stay at the club, he would still leave in the summer. Benfica would be powerless to keep him if good offer comes in the way. The report says, Manchester United will definitely make a move for him, if the Red Devils sell Angel di Maria in the summer.

Too may if and buts. Too may bold claims. Without any iota of truth in it. That’s Portugal press and their Nico Gaitan done deal stories for you!