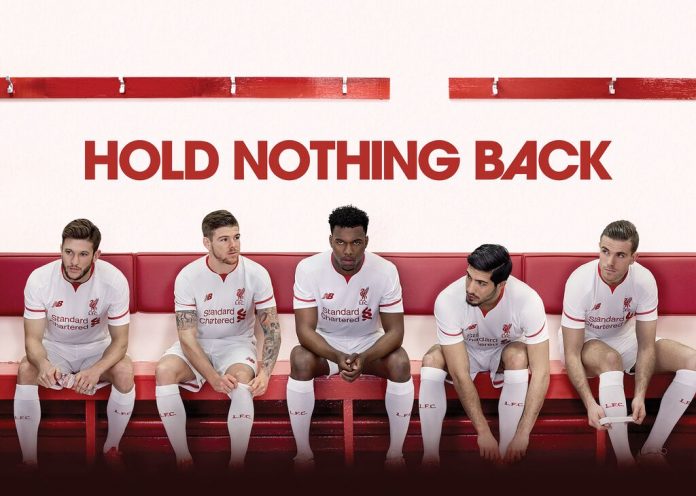 Liverpool have revealed the brand new New Balance 15-16 Away Kit on 16th June, during a live fan event in Brisbane as a part of the pre-season tour.

The New Balance Liverpool 2015-16 kits are sponsored by Standard Chartered. After Warrior Football was re-branded as New Balance, the first jerseys were launched on April 10, 2015.

The New Balance Liverpool 15-16 Away kit feature a classic kit design, and predominantly white aesthetic. A gradient mesh jacquard offering depth and perspective decorates the body, while strong accents of red in the collar, crests and taping to sleeves complete the LFC message.

The all-white New Balance Liverpool 15-16 Away Kit has a simplistic kit design with special designs like 360 degrees silicone taping, and attention to detail has also be paid to finishing, with bonded re-enforcement prints used to stabilise and strengthen key areas, and a club sign off engineered into the centre back hem of the jersey.

General Manager of New Balance Football, Richard Wright commented on the kit, “There have been many iconic moments from Liverpool FC while wearing a white away kit. Recognising those great achievements was important in the design process but it was also important to give the players and fans a kit that displayed sophisticated design technology. I’m confident this is a design, alongside the other kits in the range, which will be cherished by the fans.”

Liverpool FC goalkeeper Simon Mignolet added, “The New Balance away kit looks great and the team are aware of past years where the Club has had many successes wearing white away kits. Hopefully this kit can bring us luck away from home next season.”

Other salient features in the 15-16 Liverpool Away kit includes the usage of NB Dry, technology that helps keep the body cool and dry whilst being active. The moisture wicking fabric releases moisture away from the body, making it fast drying, and it is anatomically fitted to form around the player’s body shape for ease of movement. Finished with mesh panelling under the arms, the design aims to help airflow around the body. Twin needle stitching runs around the circumference of the shirts hem and twin heat transfer tipping to the cuff gives a seam-free finish and to prevent abrasion.