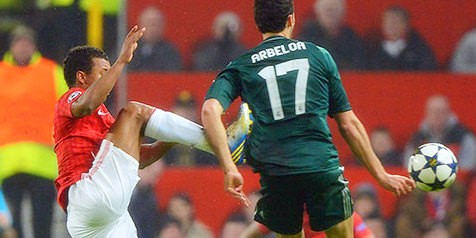 Nobody saw it was coming. Not even the Real Madrid players. When Nani and Alvaro Arbeloa both fell to the ground, after the Portugal international made a waist-high ‘challenge’ in the 57th minute, it seemed like the referee was just waiting to get both the players back on their feet.

Robin van Persie was trying to point out his earlier incident while Madrid players were simply sorting out their strategies but no one knew what was going on in Cuneyt Cakir’s mind. As both the players, stood on the feet, shaking off the collision, the Turkish referee brandished Red card to Nani and left entire stadium in disbelief.

Not only Sir Alex Ferguson was flabbergasted but even the opposition players too. Jose Mourinho, who shares great respect for the Scotsman, came to share the same opinion and he probably said “it was a poor decision”.

Nearly the entire world was bemused with that decision (keeping in mind the magnitude of the match) except United’s ex-skipper Roy Keane.

Of course, everyone is entitled to their own opinions and the ITV pundit Roy Keane has every right to air his views too. This is what he said as quoted in the Guardian:

“I think the referee has actually made the right call. Everyone’s upset about it and it’s slightly unlucky, but it’s dangerous play. Whether he meant it or not is irrelevant. It’s dangerous play – it’s a red card.”

Then going by his logic, Diego Lopez who punched Nemanja Vidic’s forehead in the first half should have seen red as it was a dangerous way of clearing the ball. Can you call it an accident? Nah, because whether Lopez meant it or not is simply irrelevant.

Also, all players who try to win any dangerous 50-50 air borne balls and raise their boots high to put the ball on ground knowing that a defender is also trying to clear the ball away, should be red carded because all these acts are “dangerous play”.

It does not matter whether two players are completely unaware of each other’s presence or not. Likewise, it also doesn’t matter if the intention was non-pernicious simply because it is a “dangerous play”.

It wouldn’t have made much clamour had that incident took place in the Premier League. But since, in European games, referees tend to be more protective, one would have understood had Nani will get a yellow card for his unintentional challenge. It was simply a wrong decision.

It changed the complexion of the game and left Sir Alex Ferguson and his players in complete “distraught” after the final whistle.

UEFA today insisted that it has no problem with the Turkish referee following his controversial handling of this match. The official will not face any immediate action as the governing body are unconcerned with the furore going on in the media.

Further, UEFA might take actions against Rio Ferdinand for his sarcastic applause of the referee after the match. In a perfect world, United players were expected to take the decisions on their chin and move on, without showing any emotions. But, unfortunately we don’t live in a perfect world.