In the (self-dubbed) newbie derby, Gold Coast have been defeated by a rampant North Queensland Fury side. Robbie Fowler lead the team from start to finish, getting on the scoresheet twice. The defeat has added to the horrible week that the Gold Coast have suffered, including a 6-0 whitewash by Wellington, and a huge condemnation by the public over club owner Clive Palmer’s (right) decision to cap crowds at 5,000 to save money. In the Brisbane Times today:

United supporters group “The Beach” – waving banners that read ‘Cap is Crap’, ‘Want fans not dollars’ and ‘Scrap the Cap’ – turned their backs on the game at one stage and chanted ‘Stop the Cap’.

Onto the match, played in front of an A-league all time low of 2,616 fans, Gold Coast made 2 changes to their side, with Vanstratten replaced by Higgins after injury, Christian Rees also made way due to injury. Zenon Caravella and Joel Porter were both dropped as a result of last week’s thumping. Steve Fitzsimmons, Tahj Minniecon both started as replacements, as well as a debut for Brazillian Jefferson, rated as one of the best Midfielders Miron Bleiberg has ever seen.

Moving onto the Fury, with only one change, Ufuk Talay’s injury paving the way for a midfield shuffle, with Williams moving into the central 4, with McBreen moving upfront, partnering with Liverpool legend Robbie Fowler. McBreen is apparently being looked at be Pim Verbeek for Asian Cup Qualifiers.

First chance fell to Fowler, whose free-kick from the 18-yard box sailed just wide of the right hand post. The match was quite quiet from then on, with few very few chances. On the 40th, however, Higgins was forced to make a top notch save turning over a close McBreen header. United’s Robson then fell prey to injury, having to be replaced by Zenon Caravella.

Deep into stoppage time, Gold Coast had their first chance, when Tahj Minniecon made a speedy break, before passing to Smeltz, whose shot was deflected, causing Henderson to push the ball past the right hand post.

In the second half, Gold Coast had the first real chance, with Porter getting the ball into the box, before laying it off to Culina, before the Fury’s Griffiths piled in to prevent any shot. Culina was obviously disappointed, thumping the ground.

Almost a minute later, North Queensland had half-a-chance, when Tadrosse squared the ball for Robertson, who’s shot went straight to Higgins. Grossman’s cross on the 57th minute was smartly punched clear by Higgins, however the rebound fell to Tadrosse, who shot just wide of the left post thanks to a deflection. 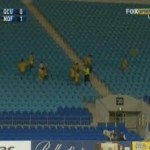 5 minutes later a similar situation befell the Gold Coast again , this time Williams’ cross was easily claimed by Higgins. After Higgin’s distribution however, Gold Coast’s defensive toying of the ball made them pay, after Williams’ intercepted Culina’s careless pass, nutmegging van der Brink in style, then playing it to Fowler, who shot first time into the back of the net. A classy goal by two classy players.

Dyron Daal tested Higgins with his powerful shot, however Higgins showed why he deserves the Gold Coast gloves, making sure he wasn’t embarrased almost as much as the Gold Coast’s crowd. Fury were pushing hard and were going all out for the three points.

They got the golden chance on the 74th minute, when Fowler’s corner was cleared, before Tadrosse’s cross found Pantelidis’ hand. Craig Zetter duly pointed to the spot, and Fowler stepped up to take the penalty, converting with a small stutter step to put off Higgins. 2-0 for the Fury.

A great result for the Fury, who are finally off the bottom end of the A-League table:

Sydney FC are holding onto the top only by a point, thanks to their win over Wellington. The Fury are now one spot away from the Final series spot, however need to be mindful that the Jets and Wellington have still played one less match. Gold Coast’s torrid week doesn’t really reflect in the standings, holding onto a valuable 3rd.