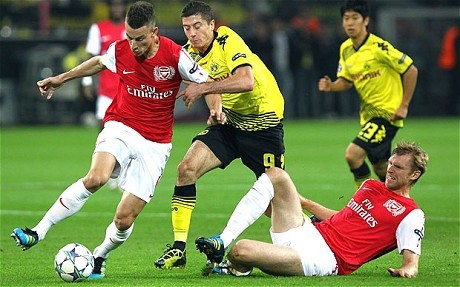 Arsenal took a major step towards qualification for the knockout stages of the Champions League last night with an excellent 1-0 win against Borussia Dortmund in Germany.

Jurgen Klopp’s men had beaten the Gunners in the first meeting of the sides at the Emirates Stadium, and the north Londoners challenging task was highlighted by the fact that Dortmund had won all eight games on home soil this term before Arsenal’s visit.

A second-half Aaron Ramsey goal proved decisive, with a great team effort resulting in a hard-fought three points for the visitors.

Mertesacker puts in a monumental performance

Germany international defender Per Mertesacker has grown in stature of late in north London after a questionable start to life at Arsenal, and put in a commanding performance here alongside Laurent Koscielny.

The former Werder Bremen centre-half put in a dominant showing against predatory Robert Lewandowski, and his interceptions, tackles and aerial ability were certainly noteworthy in the victory.

No Flamini, but Arteta steps up

In the first clash in England, Henrikh Mkhitaryan and Marco Reus found space between the Arsenal defence and midfield in Mathieu Flamini’s absence.

With the French enforcer missing here again, the main defensive midfield responsibilities fell to captain Mikel Arteta. The playmaker put in the required effort to break up opposition attacks, and alongside Ramsey and Tomas Rosicky predominantly neutralised Dortmund’s midfield dangermen.

The Wales international has undoubtedly been Arsenal’s talisman this term, and was again excellent in Germany. The goal was his reward for an endless work-rate, and Ramsey was unlucky not to double his side’s lead soon after. 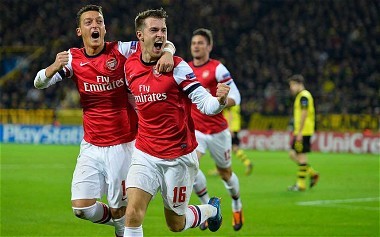 His box-to-box play was a key part of Arsenal’s win, and on current form Ramsey must be regarded as one of the top central midfielders of his kind in European football.

Olivier Giroud led the line well for Arsenal once more, and played a key role in Ramsey’s decisive winner. However, the France international did not have his best game personally.

The former Montpellier man has had to play most of Arsenal’s season as the club’s only trusted striker, and he looked fatigued here. Especially in the second-half, Giroud gave away the ball on occasion and look out on his feet towards the end.

Arsenal clearly do not fully trust Nicklas Bendtner in big games or he would have been introduced for the fading Giroud earlier. Arsene Wenger needs to address the situation in the January transfer window.

Susceptible on the left, but Wenger remedies

Dortmund got most of their joy down Arsenal’s left side, with Kieran Gibbs finding himself isolated against two onrushing attackers on occasion.

Santi Cazorla is an excellent attacking weapon, but not the most natural when going back towards his own goal. Arsene Wenger sniffed out the danger though by bringing Nacho Monreal on for his countryman to help Gibbs.

It was a tough game and a lesson for Gibbs positionally, and Monreal’s introduction was telling in Arsenal holding onto their lead.

Arsenal fans – any thoughts on the game?